Why may workers underinvest in their skills? 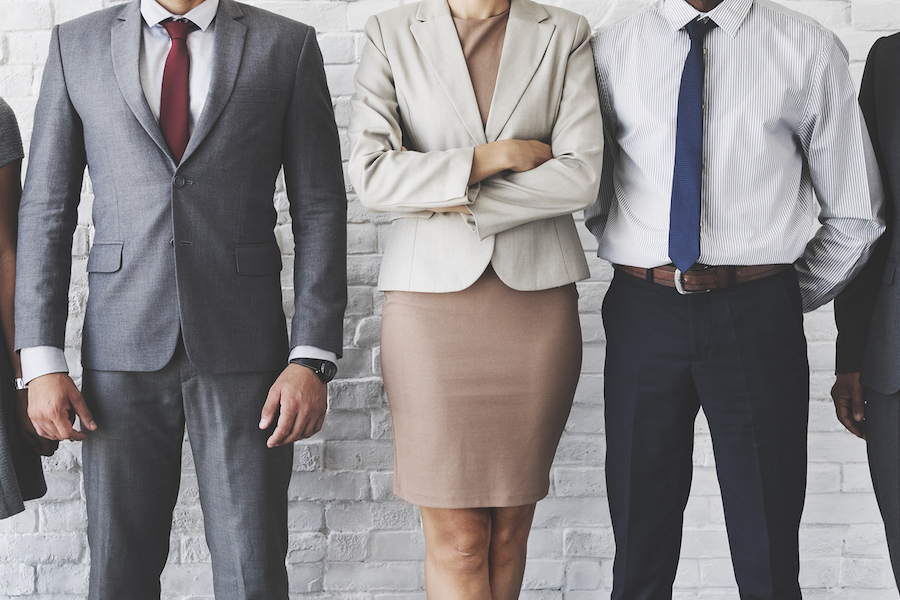 To want to invest in skills, workers must be able to build their reputations.

Reputation matters in the workplace. But often, it does not matter enough.

Everyone wants a strong reputation. After all, it signals a level of skill that can inform hiring and salary decisions. So when workers cannot build a reputation — when they cannot convey their true skills and abilities to their employers — they lose the incentive to develop their skills in the first place.

Fortunately, new technologies and big data can remedy this problem. By helping workers to track their past performance, they can make workers’ reputations more accurate and relevant to employers.

This is especially important today. Jobs are complex, and so employers have a hard time attributing work outcomes to worker skills. And, more and more people switch jobs frequently. In these cases, employers may not have access to information on past performance at all.

Everyone benefits from giving workers the incentive to build their skills. Employers, society, and workers themselves all gain from having a more highly skilled workforce. But to get this workforce, researchers need to understand the complex interplay among reputation, human capital development, and incentives.

A paper in the May issue of the American Economic Journal: Microeconomics explores the nuances of this issue. By comparing two models, author Gonzalo Cisternas explains exactly how skill development happens, why certain types of workers may underinvest in their skills, and the ways in which big data can mitigate this problem.

Because the market is facing this learning problem, wages may not be truly reflecting the returns to investing in ability. So it’s really important that we start thinking about measures or policies that can ameliorate these inefficiencies.

The next few paragraphs describe how the model works. If you want a quick summary, you can check out the infographic below and then pick up with the models’ implications.

The models describe two different types of workers. The first, based on the Nobel Prize-winning work of Bengt Holmström, is similar to a contestant on a reality television show. The second, which Cisternas develops throughout the paper, is more similar to an economist.

In both cases, the labor market — whether a panel of judges or academia — will tend to reward workers for their performance, and hence for their skills. However, as in most modern jobs, the worker’s success depends on many factors: the effort they put into their work, the contributions of coworkers, luck, good or bad days, and more. This complexity can get in the way of accurately rewarding talented workers.

Although this premise is the same for both models, its consequences are radically different for the contestant and the economist. This has real-world implications for why workers may underinvest in their skills and how new technologies can help workers build their reputations.

The critical difference between the contestant and the economist is whether they can acquire skills by working. The contestant cannot; their skills stay the same throughout the competition. They can try harder to win, but they never get better at competing. The economist’s skills do improve as they work. For example, as the economist writes papers, the economist gets better at writing papers.

Wages should align with skills. That way, workers have the incentive to invest in their skills, which ultimately benefits the employer. But because employers can’t tell if work products are due to skills or effort, they assume that it’s a little bit of both.

In the contestant model, the contestant can work hard to win each round. If the contestant performs well, the judges assume that the contestant put in a lot of effort and has gotten better at, say, baking cakes. However, although their effort has paid off, their baking skills have not actually improved. Nevertheless, they advance to the next round. The contestant learns that they can make the panel believe they are more skilled than they actually are — and that this can result in a lasting reward.

In contrast, a university notices that the economist published a popular paper. The university assumes that this was due to a combination of improved skills and good luck, but it actually had more to do with the economist’s new skills. Because the university overestimates the role of luck, they do not raise the economist’s salary in proportion to the economist’s skill improvement. As this happens again and again, the economist may stop investing in their skills. For example, they may not attend a writing workshop when they know that they will not be appropriately rewarded. 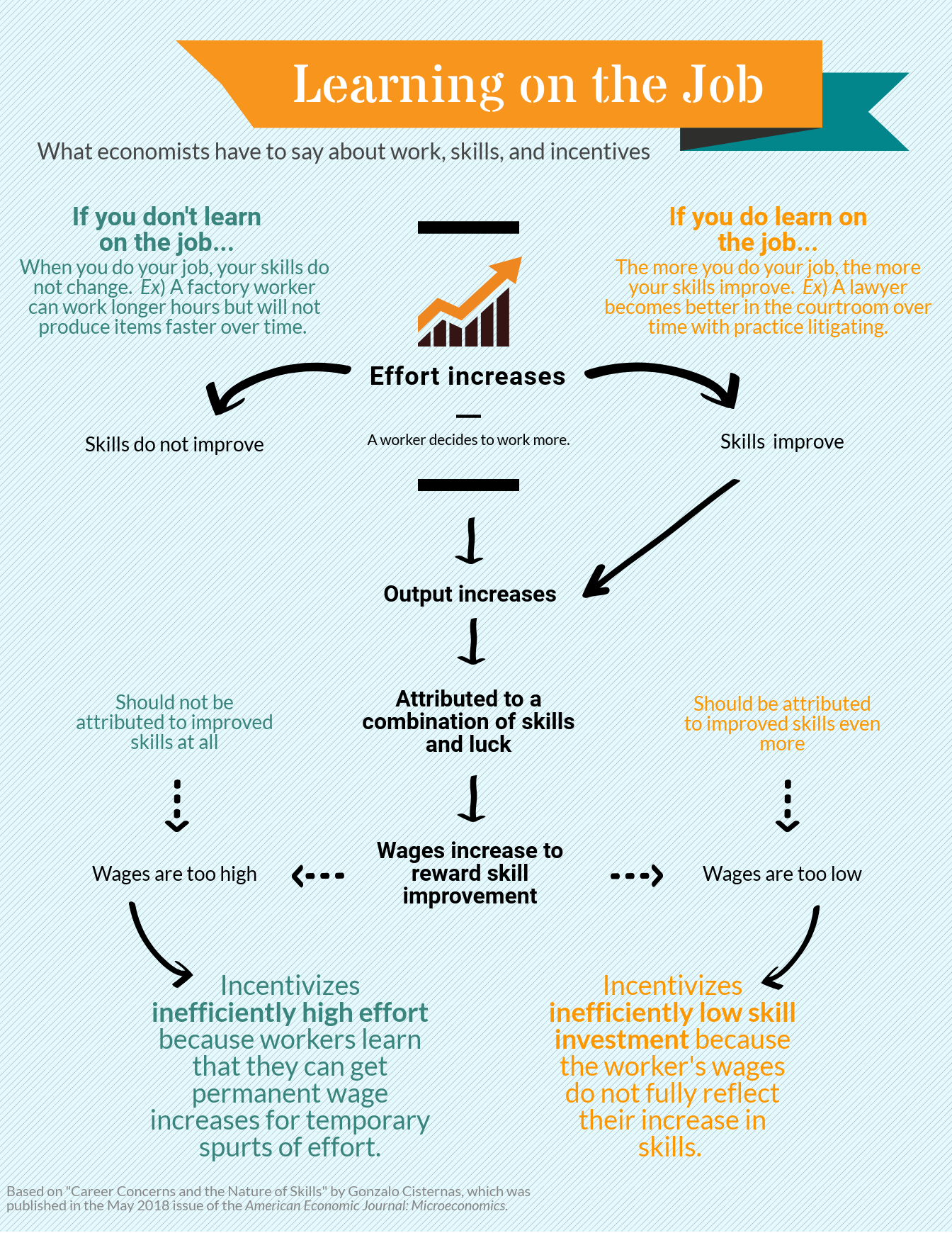 This is the main point of the paper: when it is impossible to perfectly attribute work output to skill development, many workers have the incentive to underinvest in their skills.

Meanwhile, some workers will put in too much effort. Like the contestant, they know that hard work at the beginning of a job will lead to a permanent reward. After all, their wages will remain high even if they stop performing well in the future.

One way to mitigate these problems is to allow workers to build a stronger reputation. Employers can do this by paying more attention to workers’ past performance. For example, part of the contestant’s scores for each round could be how well they did in previous rounds. A contestant with a mediocre history will not be overly rewarded for one stellar day, and a contestant with an impressive history will not be overly penalized for one bad day. In the case of the economist, one period of low productivity will not tarnish their reputation if they have already published highly cited papers.

Cisternas emphasizes that neither model perfectly represents actual work environments. In most jobs, skills and effort both matter, and skills do evolve with work. Although skill underinvestment might not be as big of a problem as the economist model would suggest, it is still a concern. This is especially true in professions like freelancing, where employers do not have the time to learn about their employees, and they may not be aware of past performance at all.

Fortunately, new information technologies and big data can help employers to look beyond the noise surrounding worker achievement. Better measures of past performance, such as scores based on a long history of reviews in an online marketplace, would enable employers to assess workers’ talents and skills. It would also provide an incentive for workers to invest in their skills over time — whether learning new recipes, writing more papers, attending a training, or getting an advanced degree.

This is especially important as modern jobs get more and more complex, making it increasingly difficult for employers to identify workers’ contributions. “Because the market is facing this learning problem, wages may not be truly reflecting the returns to investing in ability,” said Cisternas in an interview with the AEA. “So it’s really important that we start thinking about measures or policies that can ameliorate these inefficiencies.”

"Career Concerns and the Nature of Skills" appears in the May issue of the American Economic Journal: Microeconomics.

A video about the value employees put on alternative work arrangements.