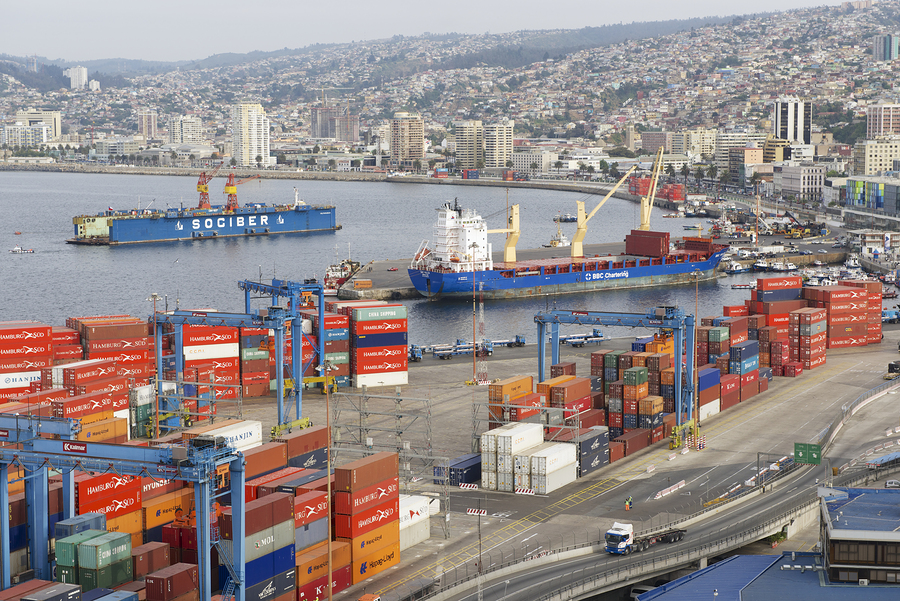 The Port of Valparaíso in Chile is one of the largest in the South Pacific. In recent decades, Chile has entered into free-trade agreements with many of its neighbors as part of the Mercosur bloc.

Trade is once again a major topic of debate in the United States as Congress wraps up a turbulent negotiation over legislation that could pave the way for new free trade agreements like the Trans-Pacific Partnership. While the debate has touched on economic displacement at home and geopolitical considerations in Asia, largely absent from the conversation is an argument that has been used to advocate for trade agreements in the past: free trade can help democracy flourish. A recent article appearing in the American Economic Journal: Macroeconomics examines the role of free trade agreements in democratic development.

In Free Trade Agreements and the Consolidation of Democracy (PDF), authors Xuepeng Liu and Emanuel Ornelas argue that free trade agreements (FTAs) help sustain democracies because they close off sources of economic rents that can be lucrative for those in power. When a nation is able to set its own tariff rates, its government has the power to pamper an industry with protectionist tariffs or expose it to harsh global competition by removing trade barriers. Officials can use that power as leverage to extract bribes from business tycoons, or can enrich themselves by personally investing in certain businesses and then enacting high tariffs in those sectors.

But a free trade agreement takes that power away from the government because the agreement commits signatories to zero tariffs on all exports to partner nations. This also reduces the cost of lowering tariffs for nonpartner nations because the FTA shrinks domestic industries that might lobby against such a move. With fewer opportunities for graft, a coup becomes less appealing. In an established democracy, the risk of an outside group violently seizing power is remote to begin with, but in a young democracy this could be a significant deterrent for aspiring autocrats.

This argument relies on the fact that a free trade agreement acts as a commitment device. If an existing FTA could be easily repealed by a new autocratic regime as soon as it takes power, it would not represent much of a disincentive for these groups to attempt to overthrow a democratic government. But reneging on a free trade agreement can be economically and diplomatically costly, and in practice FTAs tend to persist even when an authoritarian group comes to power. So a tenuous democratic government might want to establish a FTA as soon as possible and commit all future governments — democratic and autocratic alike — to permanently lower opportunities for rent-seeking and corruption.

The authors use a duration analysis to test whether free trade agreements help extend the lifespan of democratic institutions. Determining whether a country is a democracy can be tricky, so the authors use a variety of sources on democratic governance over time, including the widely-cited Polity IV scores. To disentangle cause and effect, the authors take advantage of the fact that countries tend to adopt a FTA when their neighbors do, and that they are less likely to adopt FTAs when they are physically remote from other countries, regardless of the type of government that is in place. They use these two factors as instruments and show that free trade agreements reduce the likelihood that a democratic government will fail. According to one model, a new FTA covering 20% of a country's trade reduces the chances of an autocratic takeover by about 1.2 percentage points in each subsequent year. This represents a 50% reduction in risk for the typical democracy.

While all this is “good news” for democratic countries involved in FTAs, we must emphasize that participation in FTAs is, unsurprisingly, no panacea.

A second model is designed to get at the question of whether unstable democracies are more likely to seek out FTAs. The authors model stability based on several factors including the country's democratic history, the size of the economy, and its colonial past. The authors show that at-risk democracies are historically more likely to enter into free trade agreements, possibly because of the beneficial effects outlined above.

The authors emphasize that a new FTA does not assure a democracy's security by any means; the benefit of adopting a major FTA for a democracy's survival is roughly comparable to the effect of neighboring countries becoming democratic. Even FTAs may not drive out as many protectionist rents as originally thought, as novel forms of protectionism could sidestep restrictions and allow opportunities for rent-seeking to creep back into the system. Nonetheless, the results suggest that the trend toward increasing trade liberalization is good news for democrats around the world. ♦

"Free Trade Agreements and the Consolidation of Democracy" appears in the April 2014 issue of the American Economic Journal: Macroeconomics.