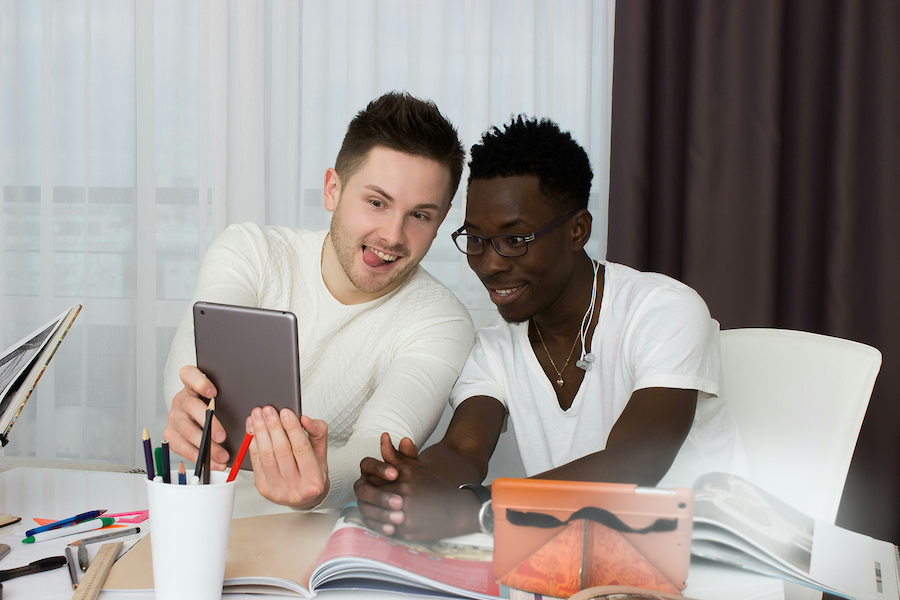 A new paper in AEJ: Policy says that white students who were exposed to black students in their first year were more likely to become paired with a black roommate the following year.

Considering race in college admissions has been a hot-button issue for decades.

Defenders say increased diversity is essential to a good education. Critics say affirmative action dilutes the talent pool of admitted students, and can even hurt minorities.

But if improving race relations is the goal, there is new evidence that exposing whites to more minorities results in real progress.

In the November issue of the American Economic Journal: Economic Policy, authors Scott Carrell, Mark Hoekstra, and James West empirically investigate how a diverse environment shapes the way white students behave toward black peers, not merely the attitudes they report on surveys. Their findings lend credence to the contact hypothesis and offer an optimistic picture of how exposure to minorities can help whites shed personal prejudices.

“There’s enough research on what people say,” Carrell said in an interview. “What about what people do?”

Affirmative action policies at public universities have faced major court challenges since the 1970s. The Supreme Court in 2016 upheld a University of Texas policy that allows race and ethnicity to be considered in admissions, but public opinion is largely divided on the issue.

Opinions on Race-Based Admissions
Americans' opinions vary on the extent to which race should be a factor in college admissions decisions. The responses below are based on a survey of US adults conducted Jan. 22-Feb 5, 2019. Share of respondents who didn't offer an answer are not shown.
Source: Pew Research Center (2019)

There is still a lot of debate over whether such policies even help minorities. Critics say they cause inadvertent harm by pushing minorities into selective schools where they are less likely to succeed in academically rigorous programs.

This latest paper, however, says that as long as academic standards don’t suffer, creating a more diverse campus can have important impacts on how whites behave toward minorities.

The authors looked to Carrell’s alma mater—the United States Air Force Academy—to examine the issue. The academy does regular surveys of students that include questions around their racial attitudes, but the authors were more interested in whether exposure led to any increase in bi-racial roommate pairings.

At most traditional colleges, students are allowed to pick their roommates as sophomores. But it’s tough to separate the factors that drive those decisions from one another. A white student who pairs up with a black student their second year may already be more inclined to room with minorities, perhaps because they came from a more diverse city or from some other pre-college experiences. The authors needed to be able to isolate how exposure in the first year of college directly impacted roommate decisions the second year.

The Air Force Academy provided a good setting because of the random way peer groups are formed. Students are assigned to 100-member squadrons, with whom they do just about everything together—eat, train, live. They are tight units, and during the freshman year, cadets don’t really socialize outside of them.

“It’s forced interaction. It’s unique,” Carrell said. “You could argue that racial barriers are really eliminated within the military.”

Critically, these squadrons are reshuffled the following year, so that cadets meet an entirely new group of strangers. Their second-year roommates come from that reshuffled squadron. This gave the authors a double-blind system to study shifts in behavior. Were white cadets who were exposed to more minorities in their first year more likely to room with a black cadet—whom they did not know previously—the following year?

But to have any effect on white behavior, the black peer had to be of medium- to high-academic aptitude, as measured by their high school performance. There was no effect, positive or negative, on whites when they trained alongside black peers from the bottom third of the ability spectrum.

There are some implications for admissions counselors. If improving race relations on campus is a goal, colleges would still want to pay attention to academic ability. And when doing so, they would pay more attention to their high school performance through measures like GPA, course selection, or the rigor of their high school itself, Carrell said. There was no real correlation with SAT scores.

“I think we clearly show exposure is important and positive,” Carrell said, “but there are potential tradeoffs depending on how admission decisions are made.”

“The impact of college diversity on behavior toward minorities” appears in the November issue of the American Economic Journal: Economic Policy.

Seth Gershenson on the impact of same-race educators

What impact does having a same-race teacher have on long-term student performance?