The economics of anti-Semitism

The AEA interviews Sascha Becker about how the Protestant Reformation created competition and conflict between Christians and Jews. 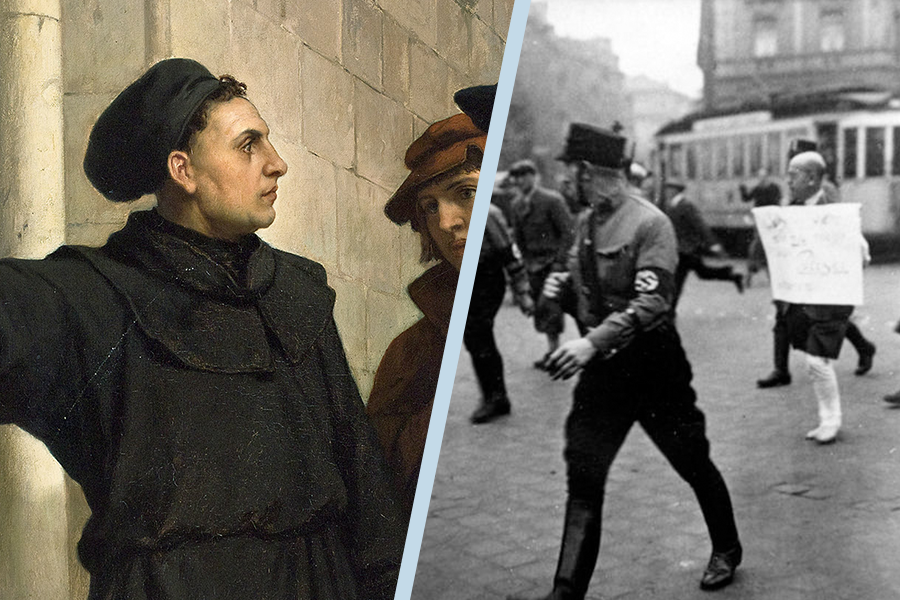 Martin Luther (left) led the Protestant Reformation that ultimately allowed money lending among Christians and created competition with Jews. Nazi soldiers (right) march a barefooted Jewish lawyer through the streets of Munich in 1933.

The scourge of Anti-Semitism is resurgent. Last year had a near record number of attacks against Jews in the US, a trend that is echoed in Europe and other parts of the world.

Researchers are still trying to understand the factors—whether cultural or political—that drive this ancient prejudice.

In the May issue of the American Economic Review, Sascha Becker and Luigi Pascali consider whether economic competition plays a role. They look back to the Protestant Reformation in the 16th century to determine whether rivalry between Christians and Jews in money lending resulted in prejudices that have persisted for centuries.

Becker said the paper has lessons for today, including insights into the dark side of competitive markets.

Becker spoke with the AEA about how a Christian religious transformation fed resentment against Jews, how economics can help us understand ethnic conflict, and how it relates to larger cultural and political forces that drive racism.

An edited transcript is below and a longer audio version of the interview can be heard by clicking on the media player below.

AEA: What opportunity did this particular historical period (the Protestant Reformation) offer you as you tried to answer this larger question of how economic competition shapes ethnic attitudes?

Sascha Becker: Two experiences made me think about this episode in connection with antisemitism. In the Nazi period, the Nazis rose to power mainly in Protestant areas. Protestant areas were more likely to vote for the Nazis. I always found it interesting, fascinating, strange, and hard to understand where that comes from. At the same time, I had done earlier research on the Reformation, and as a side result of that earlier research, I noticed that in the 19th century, the share of Jews was higher in Catholic areas. And at the time, I didn't follow up on that, but it always stuck in my head that somehow, maybe these two things—the Nazis being a very anti-Semitic party, and the fact that there are more Jews in Catholic areas—might be related.

AEA: Describe how the division of labor was drawn along ethnic lines prior to the Protestant Reformation.

Becker: In the Old Testament there is the idea that you shouldn't charge interest for your own fellow religious friends, but you may well charge interest to other groups. The Catholic church in the 13th century explicitly reaffirms that Christians shouldn't be charging interest to each other. But they carved out a niche for the Jews and permitted them to engage in money lending with Christians. . . It was clearly a niche that was created for Jews to do that.

With the Reformation, things changed. Martin Luther has different ideas on theological issues but ... he's very soon confronted with the question about whether he supports the prescriptions of the Catholic church, including money lending. On the one hand, Luther the theologian continues to say that there should be no lending at interest between Christians. But he also has a political side and is permissive of (money lending).

When he is confronted by certain city councils, whether indeed they should enforce these Catholic rules, he says, 'No, OK fine.' He accepts that money lending is going on. That shifts the balance towards more competition between Christians and Jews. So, Jews no longer have this particular market niche. 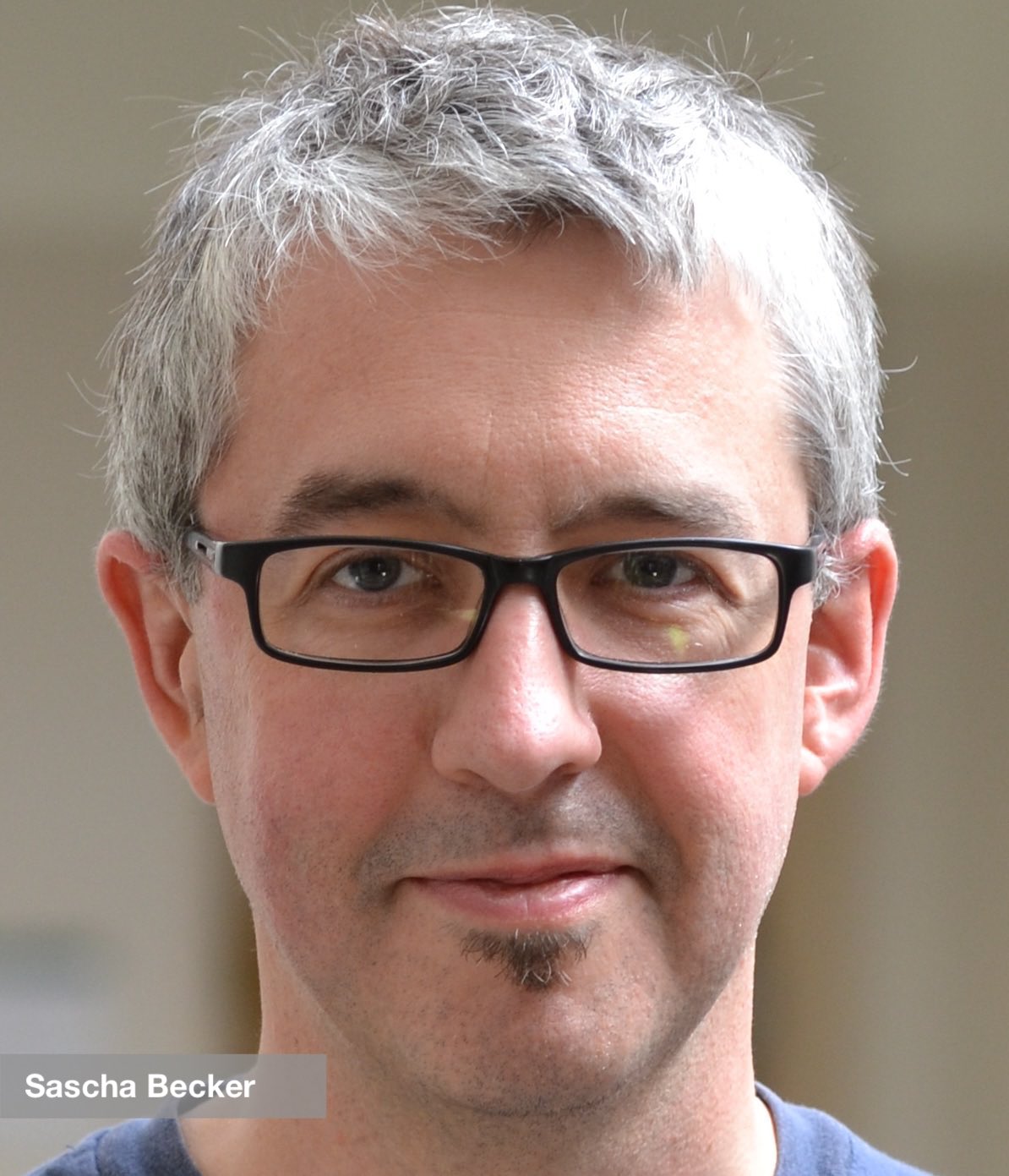 AEA: What was the result of that competition?

Becker: We collect measures of pogroms from (the year) 1300 onwards to the 1900s and we simply look at how the pogrom intensity changes over time in two sets of cities: those that are Catholic throughout and then, separate from that, cities that in the 16th century switch to become Protestant. What we see is, after 1517, there is a relative shift in pogrom intensity away from Catholic areas toward Protestant areas.

In the 19th century data, we also have information about what sectors different religious groups work in. What we find there, at the end of the 19th century, is complementarity in banking. If Jews are more likely to work in banking, it's still stronger in Catholic areas than in Protestant areas.

AEA: The Reformation's impact on anti-Semitism cast a really long shadow. Describe how these attitudes reshaped communities well into the 19th century.

Becker: What seems to be happening is that there is this initial shift in anti-Semitism in the 16th century when measured by expulsions of Jews from cities and/or killings of Jews. From the end of the middle ages to the modern era, the homicide rate goes down. People settle accounts increasingly in less violent terms.

But anti-Semitism starts to shift in the way it expresses itself. People may then in the 18th century and the 19th century no longer literally expel Jews from cities and withdraw their citizen rights. But anti-Semitism doesn't go away. We find . . . that in Protestant areas the vote share for the anti-Semitic party was higher than in the Catholic areas. We seem to find that over the centuries, there is some persistence in anti-Semitism that we can trace it back to the 16th century to when the reformation started.

AEA: How do your findings help us understand the current moment, with Brexit, the rise of nationalism, and the interplay of economics and ethnic conflict that we see in Europe and in the US?

Becker: You mentioned Brexit. After . . . a large number of Eastern Europeans came to the UK and there seemed to be increasing competition in the labor market that may have translated into unhappiness by voters that then would vote for either UKIP, the party that tried to capture the emotions of those that were now subject to more competition, and that may equally have translated into the Brexit vote. I think the general mechanism that economic competition can lead people to put the blame on the competing party is a very general one and we seem to see it across many countries.

We as economists tend to see competition as a good thing in many respects, but we all have to recognize that there may be groups that see competition as a bad thing and may then either express their discontent by voting in a certain way and, in older days, there maybe even was physical violence when it came to dealing with competitors.

AEA: Where do you think this explanation has its limits?

Becker: It is clearly by no means the only explanation. We as economists tend to see competition as a good thing in many respects, but we all have to recognize that there may be groups that see competition as a bad thing and may then either express their discontent by voting in a certain way and, in older days, there maybe even was physical violence when it came to dealing with competitors. But clearly there are many many explanations for the rise of populism.

AEA: I don't know if there is any actionable lesson here, but if there is, if indeed economic competition feeds some of these ugly tendencies, is there a way to address it?

Becker: That is a tough question. Clearly the solution cannot be labor market segregation and carving out different niches for different ethnic groups. That clearly cannot be the solution. But when you think about the modern context of migration or globalization, I think politics has often been slow to recognize that competition, especially for lower skills, may really make life harder. In the context of the UK, we talked about Brexit, there clearly was the period where in some areas, people felt left behind and that nobody would listen to them.

And I think there needs to be also public services that keep up with immigration. When we think about this modern day context, and we have millions of people migrate to a location, there is also competition for public services and getting into the public health system and so on. And there the state can definitely do more to accommodate that increased demand.

“Religion, Division of Labor, and Conflict: Anti-semitism in Germany over 600 Years” appears in the May issue of the American Economic Review.

Putting a price on prejudice

Workplace discrimination is expensive. At what point does it become too costly for the discriminator?