The Committee on the Status of Women in the Economics Profession was formed in response to a grassroots motion, presented by Carolyn Shaw Bell on behalf of the Women's Caucus at the December 1971 Business Meeting of the American Economic Association.  This Women’s Caucus was spurred by a belief that the economics profession should be open to women as well as men. This resulted in a series of resolutions, intended to foster equal opportunities for women in economics, including equitable early career encouragement, mentoring and job market assistance, hiring, wages and benefits, and promotion and tenure opportunities.

Notably, Resolution VI, which resolved “that the AEA shall recommend and provide means for communication of the open listing of all employment opportunities for qualified economists,” led directly to the creation of Job Openings for Economists (JOE), the leading employment publication for economists from around the world since 1974.

I do remember a lot, but have decided CSWEP is part of history, so I looked up primary data. The American Economic Review (March 1972, pp 470-474) reports the business meeting in 1971, establishing CSWEP to investigate sex discrimination among professional economists in all lines of work and to recommend an affirmative action program. The Committee was charged to report, and the American Economic Association to publish, its "findings, conclusions, and recommendations."

CSWEP administered its first Annual Survey on the gender composition of economics departments in 1972 and found that 6% of faculty and graduate students were female (CSWEP Annual Report, 1972).  Carolyn Shaw Bell again:

“The report was a session on the program at the 1973 annual meeting in New York; the panel discussion became a lively debate preserved on tape. Professor Milton Friedman was invited to join the panel but did not attend the meetings; five long and thoughtful letters between him and me exist with copies in the Wellesley College archives.

As for publication, the Committee opted for one of the quarterly issues of the AER to carry its formal findings. The then editor of the journal asked me repeatedly to forget the whole thing, not to write and publish a piece that could only be divisive, that should be tactfully ignored for the sake of professional collegiality, that would cause hard feelings among the men and not help women at all. I kept replying that I had no power, since I merely chaired the Committee on the Status of Women in the Economics Profession, to ignore a Resolution passed by the American Economic Association, nor did I think, honestly, that it was in his power to do so. And so in the December 1973 issue of the AER, tucked away at the very end with ‘Announcements and Notes,’ appears the article ‘Combatting Role Prejudice and Sex Discrimination.’” 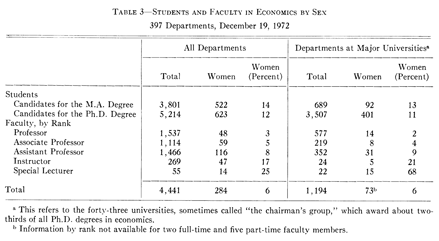 As Evelyn L. Forget notes in American Women and the Economics Profession in the Twentieth century “At the 1972 annual meetings, two women presented papers, three chaired sessions and six were discussants. No member of the American Economic Association Executive was female. In 1972, CSWEP clearly had work to do” (Œconomia, 1-1 | 2011, 19-30).

Yet there is still work to be done.  While there were increases in the share of women entering the economics profession in the last quarter of the 20th century that continue to drive increases in the share of female associate and full professors, the share of women receiving PhDs and becoming assistant professors in research-oriented economics department has stagnated over the last decade.  As such, CSWEP remains committed to the support of programs that promote the careers of women economists and to raising awareness among men and women of the challenges that are unique to women’s careers in economics, including sharing best practices for increasing diversity in the economics profession.

For an excellent detailed history of CSWEP, click here.

Cicarelli, James and Cicarelli, Julianne. Distinguished Women Economists. Greenwood Publishing Group, 2003. [Carolyn Shaw Bell: covers early CSWEP and interesting story on how she presented findings on the family in Newsweek instead of an academic journal.]

Kahn, Shulamit. “The Status of Women in Economics During the Nineties: One Step forward, Two Steps Back.” CSWEP Newsletter, Winter 2002.

Kimmel, Jean and Moe, Karine. “The CCOFFE Experience: Reflections from a Mentor and a Mentee,” CSWEP Newsletter, Spring/Summer 2001.

Romero, Jessie. “The Profession: Where are the Women?” Econ Focus, 2nd Quarter, 2013. The Federal Reserve Bank of Richmond. https://www.richmondfed.org/~/media/richmondfedorg/publications/research/econ_focus/2013/q2/pdf/profession.pdf