Subsidizing electric vehicles is one of many ways policymakers can reduce carbon dioxide. But is that the cheapest approach?

Ask an environmental economist what they would do about climate change, and more than likely they’ll tell you to put the right price on carbon emissions and let markets do the rest.

“It's a harmonized, level-playing-field way of getting the prices right and aligning incentives,” economist Kenneth Gillingham said in an interview with the AEA.

He added that, although carbon pricing should be the starting point for climate policy, carbon isn’t usually priced and governments instead use a variety of other tools to combat climate change.

Gillingham and co-author James Stock explained how policymakers should think about fighting climate change, even when carbon can’t be priced, in the Fall issue of the Journal of Economic Perspectives.

The fundamental problem with carbon emissions is that people who emit pollutants don’t pay for the damage they cause.

Pricing carbon would impose the costs on the polluters, but this ideal tool has been politically infeasible in the US. So policymakers have turned to narrow interventions like subsidizing electric cars and forcing power plants to reduce their emissions by adopting abatement technologies.

However, policymakers need good cost estimates to know if these policies are worthwhile.

Most discussions about the cost of reducing climate change start with estimates from the consulting firm McKinsey, known as the “McKinsey curve.”

For context, the average American car emits about five tons of CO2 in a year; the US emits over five billion tons.

But most economists balk at the assumptions behind McKinsey’s estimates.

Gillingham and Stock are concerned that the McKinsey curve hides many costs. When they looked at economic research that estimated the cost of carbon-reduction policies in practice, they found that costs were almost always higher, sometimes much higher.

A free carbon-reduction lunch?
Policymakers have a wide range of options to reduce CO2. The chart below shows the static-cost estimates of some popular policies, and how much they cost per ton of CO2 reduction. Some policies not shown, such as solar photovoltaics subsidies, have estimates as high as $2,000. 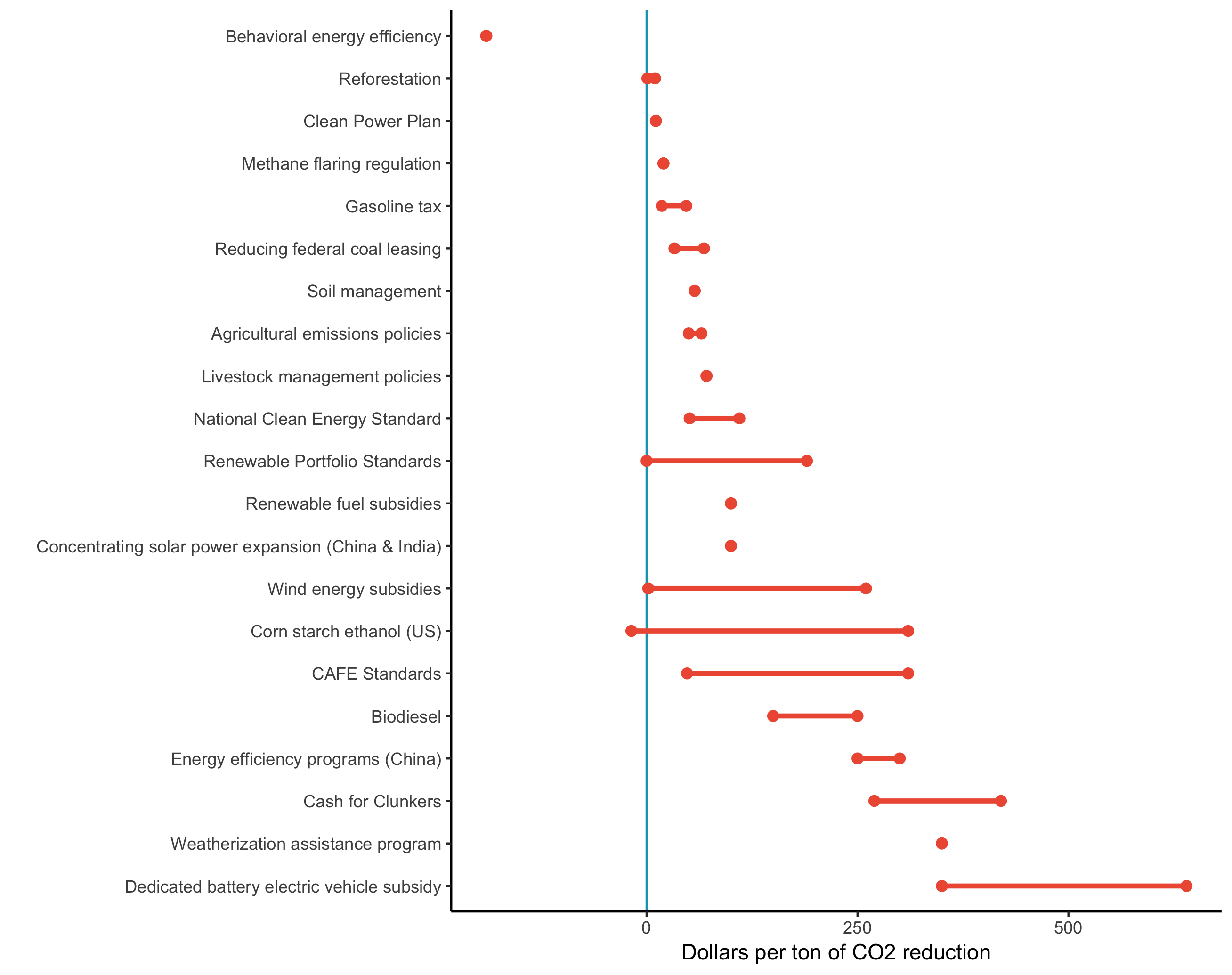 While Gillingham and Stock find that economists’ estimates are generally higher than McKinsey’s, some policies do still pay for themselves. So-called nudge policies, inspired by behavioral economics, are often cheap to implement and encourage better decision making.

Unfortunately, the authors say that the significant carbon reduction needed for recent climate goals wouldn’t be met by nudging consumers away from fossil fuels or energy consumption.

Large reductions are more likely to come from policies encouraging the adoption of electric vehicles and solar power, among others. Cost estimates for these policies are quite high though, ranging from hundreds to thousands of dollars for a ton of CO2 reduction.

However, even the above economic cost estimates — sometimes called short-run or “static” costs — ignore long-run costs and emissions reductions.

For example, dynamic effects may play a role in the costs and benefits of the controversial Keystone XL pipeline, a proposed oil pipeline in Canada and the US.

A static cost estimate of transporting oil via the Keystone XL pipeline might suggest that it’s a cheaper alternative than rails and trucks.

But in the long run, the cost savings from the pipeline could make people more reliant on a dirty energy source, making it harder for low-greenhouse-gas resources to innovate and eventually compete.

Climate change is a very long run problem, and addressing climate change in a deeper way is something that is going to require continued technological change.

In an ideal world, policymakers would focus on dynamic costs, according to Gillingham. There are two main reasons.

First, climate change is a long-run problem. The costs and damages of climate change may not be felt for several generations, so our estimates should look equally as far into the future.

Second, technology changes faster than most people expect. Although short-run estimates may be more accurate, they can be quickly overtaken by new technologies.

Gillingham and Stock explain that if Germany had relied solely on static cost estimates, their programs to promote solar power would have looked hopeless and wasteful. But their lead encouraged rapid innovation. Since the mid 2000s, solar-panel prices dropped by roughly 70 percent, making them more affordable than most people imagined possible.

“Climate change is a very long run problem, and addressing climate change in a deeper way is something that is going to require continued technological change,” Gillingham said.

"The Cost of Reducing Greenhouse Gas Emissions" appears in the Fall issue of the Journal of Economic Perspectives.