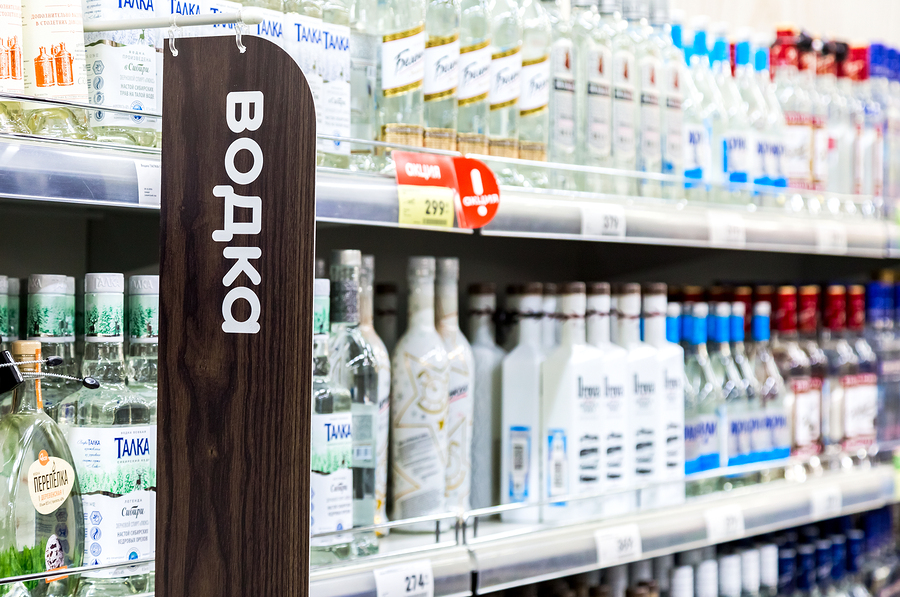 Shelves of vodka at The Hypermarket Karusel in Samara, Russia.

Russian men are well known to have a fondness for vodka, and unfortunately, those hard drinkers pay for their alcohol abuse with their lives.

Government efforts to reduce alcohol consumption have had varied success. Mikhail Gorbachev’s anti-alcohol campaign in the late 1980s corresponded with a drop in alcohol sales and also a relatively low male mortality rate. But by the 1990s, the trend reversed, with alcohol sales doubling between 1991 and 1996 and mortality rates spiking 70 percent.

A paper in the January issue of American Economic Review: Applied Economics considers whether an alcohol tax could help reduce alcohol consumption and save Russian lives.

Author Evgeny Yakovlev collected more than 20 years of regulatory and health data spanning 1995 to 2008 to study how Russian men responded to a 50 percent price increase in alcohol.

But estimating the effect that the tax had on an individual’s consumption doesn’t take into account other factors, like the effect that those choices might have on friends or the probability of developing an alcohol dependency.

So, Yakovlev also incorporated those features — habit formation and peer effects — into his models, and also considered whether consumers were myopic (short-sighted) or more forward-looking to think about the long-term consequences of their drinking. 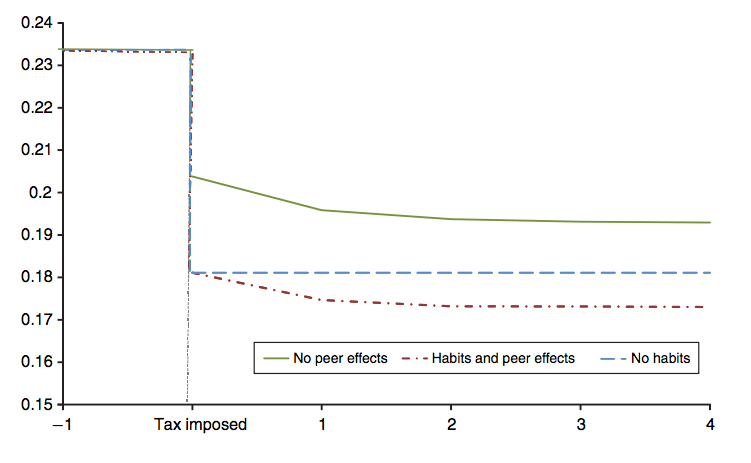 The chart above estimates the effect that a 50 percent increase in the price of vodka had on the share of heavy drinkers among myopic young men — the subset of those in their late teens and 20s who were only interested in getting drunk with friends.

The vertical axis is the share of heavy drinkers and the horizontal axis is the years before and after the tax (represented by the vertical dotted line) was imposed. Dashed lines show the effect that the price hike had on men in three situations: one where peer effects and habit formation was included, one without peer effects, and one where habits weren’t included.

The tax had the largest impact on drinking when factoring in habit formation and peer effects together, with that model predicting a decrease in the share of heavy drinkers by 6 percentage points — from 23.5 percent to 17.2 percent — over five years.

Overall, he found that the mortality rate for these young men fell by one-fifth. It also lowered death rates for older men aged 30-39 (one-seventh), and men 40-49 (one-twentieth).

Demand for Alcohol Consumption in Russia and Its Implication for Mortality

Alcohol abuse is widely blamed for the very high rate of male mortality in Russia. I estimate a structural model of the demand for alcohol that incorp...