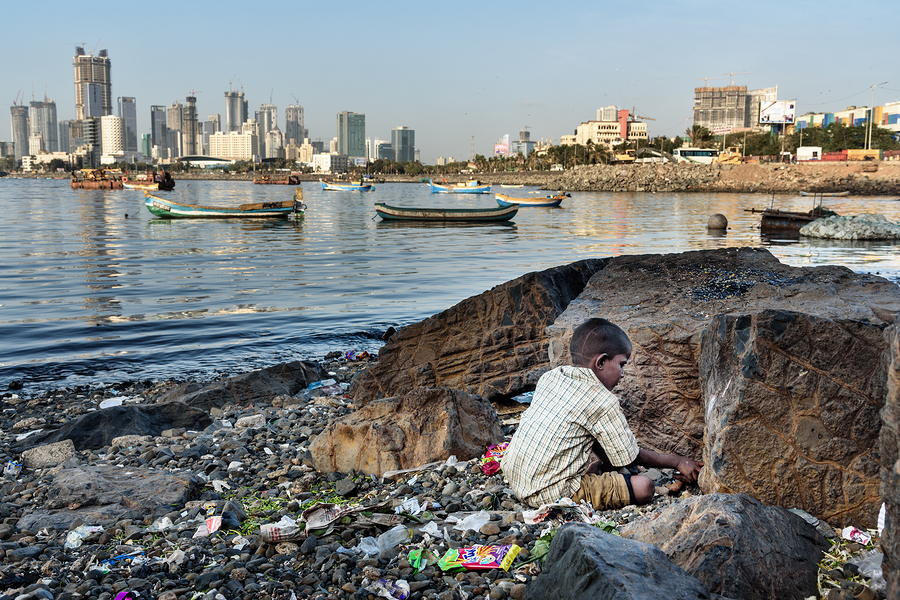 An Indian boy sits on a trash-strewn beach, with the Mumbai skyline in the background.

India recently saw its worst outbreak of Hindu-Muslim violence in years. The clash was a reminder that although the world’s largest democracy has come a long way since independence, economic growth hasn’t resolved all of its problems.

A paper in the Winter issue of the Journal of Economic Perspectives explores how India has been blessed with economic dynamism but still struggled with inequality among its many groups.

In particular, authors Rohit Lamba and Arvind Subramanian showed just how much relatively rich areas in India have pulled away from the rest of the country.

Figure 4 from their paper illustrates this unique, uneven growth across India—in contrast to China. They also compare it to growth among countries around the world.

In the chart above, the blue points represent Indian states; the red ones are Chinese provinces. The x-axis in both panels indicates the gross domestic product per person, in purchasing power parity. (Individual countries are not plotted, but they are represented by the short-dashed trend line.) Panel A shows the average growth rates between the years 1994 and 2004, and Panel B breaks this out for the period between 2004 and 2014.

In the first period, India shows clear signs of divergence (the upward-sloping solid blue line); rich states were growing faster than poor states between 1994 and 2004. Chinese provinces and countries of the world do not show much convergence or divergence.

In the second period, Panel B, Chinese provinces and countries around the world start converging (the two downward-sloping dashed lines), but states in India now start diverging even more rapidly.

India is not just experiencing geographic inequality. There are major differences between genders, religions, castes, and industries, the authors said.

India’s unequal development raises many challenges for its own policymakers. But it also offers a warning for other countries that assume a rising economic tide lifts all boats.

India's sequencing of economic and political development has been unusual. In contrast to the West and more recently East Asia, democratization has pr...