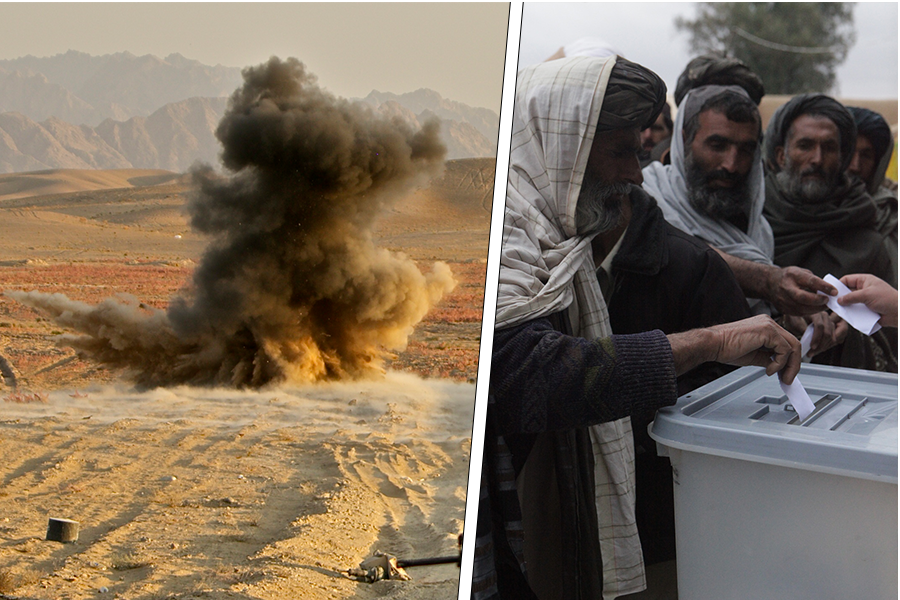 Left: The Afghan army neutralizes an IED. Right: Afghans turn in their votes during elections.

The Afghan people are awaiting the final results of their 2018 parliamentary elections.

During the election, the Taliban and other insurgents murdered candidates and rocketed polling stations. They killed or wounded over 170 people according to some reports.

A casual observer might look at the suffering and destruction in headlines and conclude that the Taliban have no plan except violence, but there may be a more sophisticated logic behind the insurgents’ tactics.

The Taliban's election violence has been carefully designed to undermine Afghanistan's government while avoiding civilian casualties, according to a paper in the November issue of the American Economic Review.

Authors Luke N. Condra, James D. Long, Andrew C. Shaver, and Austin L. Wright note that elections have been an important part of building the Afghan state. Elections can help to legitimize emerging democracies. For this reason, the Taliban have made elections one of their primary targets.

Panel A from Figure 3 in the paper shows the typical number of attacks at each hour of the 90 days before and after the election. The black lines show that two to three attacks occur on average from 7:00 a.m. to 7:00 p.m. each hour.

The black line in Panel B illustrates two features of the Taliban’s strategy on election days. First, the peak number of attacks is roughly ten times larger on election days. Clearly, the Taliban seek to disrupt elections. Second, their attacks are concentrated earlier in the day, before some polls open, evidence that the Taliban attack at times that may avoid civilian casualties.

The authors reason that the Taliban aim to demonstrate the weakness of the Afghan government. Suppressing voter turnout casts doubt on the legitimacy of the election’s winner and increases dissatisfaction in the populace. Yet, they risk alienating some people if they harm too many civilians, resulting in more citizens turning on the Taliban and providing information to the government.

Despite the threats and attacks, voter turnout in the 2018 parliamentary elections was estimated to be roughly 45 percent, an improvement on the last election and one good sign for a struggling democracy.

The Logic of Insurgent Electoral Violence

Competitive elections are essential to establishing the political legitimacy of democratizing regimes. We argue that insurgents undermine the state's ...