What economists can expect to earn in different fields

Payscale.com reports its survey of people with Baccalaureate degrees (and no more) who are employed full time, showing starting salaries (typically with two-years of experience) and mid-career annual earnings.  Here are selected occupations for the 2012-13 report.

Source: Majors That Pay You Back, Payscale.com

Median earnings of economists by highest level of degree for persons of all ages observed in 2010 by gender.

Thomas Carroll, Djeto Assane, and Jared Busker use a large national sample from the American Community Survey developed by the Bureau of the Census with observations from 2009 to 2012 to estimate earnings differentials for economics majors compared to other college majors.  The table below reports the estimated differential for economics majors compared to non-economics majors, on average, when the statistical estimate adjusts for personal characteristics (age, ethnicity, citizenship, and English proficiency).

Winters and Xu also use the American Community Survey (2009-2010) to estimate earnings differentials for economics majors compared to non-economics by state and metropolitan area.   Economics majors accounted for 2.28 percent of college graduates.

Stability of Earnings and Employment

The Hamilton Project at the Brookings Institution provides an interactive summary of life-time earnings for people with different college majors. Jordan Weissman compares economics to other disciplines at “Want to Be Stinking Rich? Major in Economics,” Slate. The first figure below shows the  median earnings by years into a career for all BAs in a given major who are employed full-time including those with any subsequent graduate degree. The blue line at the bottom shows median earnings for all holders of BA degrees. The green line shows economics and the orange shows finance majors. The purple line at the top shows electrical engineers.  The economics major starts just above the finance major but shows a stronger trajectory, briefly topping the electrical engineers at about 15 years in the career but does not sustain the level of the engineers in the last two decades of the career. 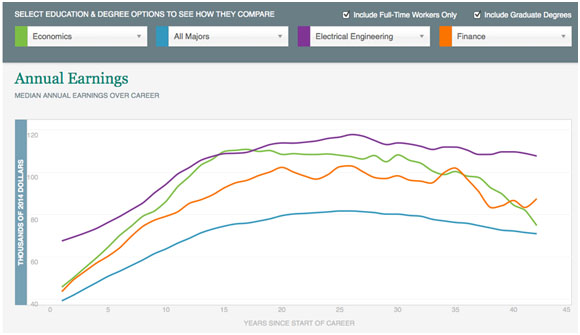 The figure on Lifetime Earnings below reports the total lifetime earnings on the vertical axis (in terms of present value) with the percentage distribution from the lowest earnings to the highest along the horizontal axis.  At the 50th percentile, the figure below shows the total for each of the four lines in the figure just above.  Although all four groups show a substantial flip up among those in the top ten percent—income distributions are usually skewed right as indicated by the flip here—the economics major has the largest flip.  The economics major exceeds the electrical engineers at about the 65th percentile and widens the gap particularly with engineering but also with finance up to the highest earnings.  The economics major then shows a wider dispersion of earnings but with a much longer right tail, that is, a high probability of very high earnings than the other majors.

The Center on Education and the Workforce at Georgetown University reports the median earnings of adults working full-time for a full-year whose education stopped with the bachelor’s degree using data from the 2010 Census.   The table below is a subset of a report of 173 majors published on the Wall Street Journal website at http://graphicsweb.wsj.com/documents/NILF1111/#term “From College Major to Career”, October 24, 2013.  The median earnings of economics majors is 32nd among all 173 majors.

The fifteen majors reported below are those with the highest median earnings among the 50 most popular majors. Economics is in ninth place in median earnings in this group.  The table reports the percentage of the majors who are unemployed, the earnings at the 25th percentile (Q1), the median, and at the 75th percentile (Q3).   Economics has the widest dispersion between Q1 and Q3 with Finance in second place.

Becoming a professor, researcher, or educator

What you need to do to get in