Ellora Derenoncourt discusses how economic prospects declined for the generations of African Americans that followed the Great Migration. 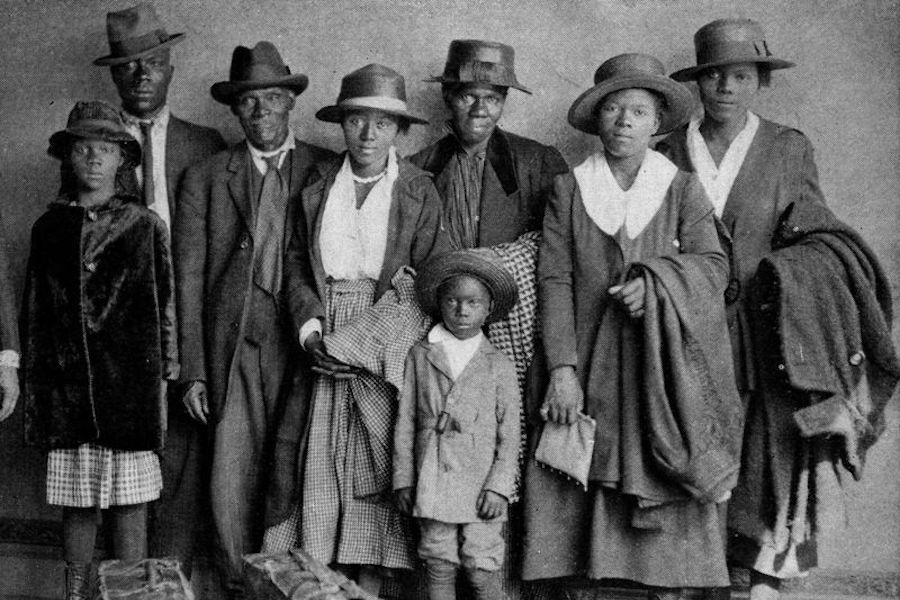 Scott and Violet Arthur arrive with their family at Chicago's Polk Street Depot on Aug. 30, 1920, two months after their two sons were lynched in Paris, Texas. The picture has become an iconic symbol of the Great Migration.

In the first half of the twentieth century, four million African Americans left the Jim Crow South to create new lives for themselves.

They moved to cities like Detroit, Baltimore, and Chicago in what came to be known as “the Great Migration.” And indeed, they did improve their economic standing, with some families doubling their earnings. But opportunities to move up the ladder would dwindle for the generations that followed.

In a paper in the American Economic Review, Ellora Derenoncourt shows that the way northern cities responded to the migration dampened the earnings potential for African Americans living in those locations today.

She says the findings offer insights into how some policies that encourage families to move to opportunity, such as voucher programs, ignore more fundamental questions about the elements that make neighborhoods thrive.

Derenoncourt spoke with Chris Fleisher about her research, the mechanisms that reduced earnings potential for Black residents in some northern cities, and the implications for programs aimed at moving low-income and minority families to opportunity. 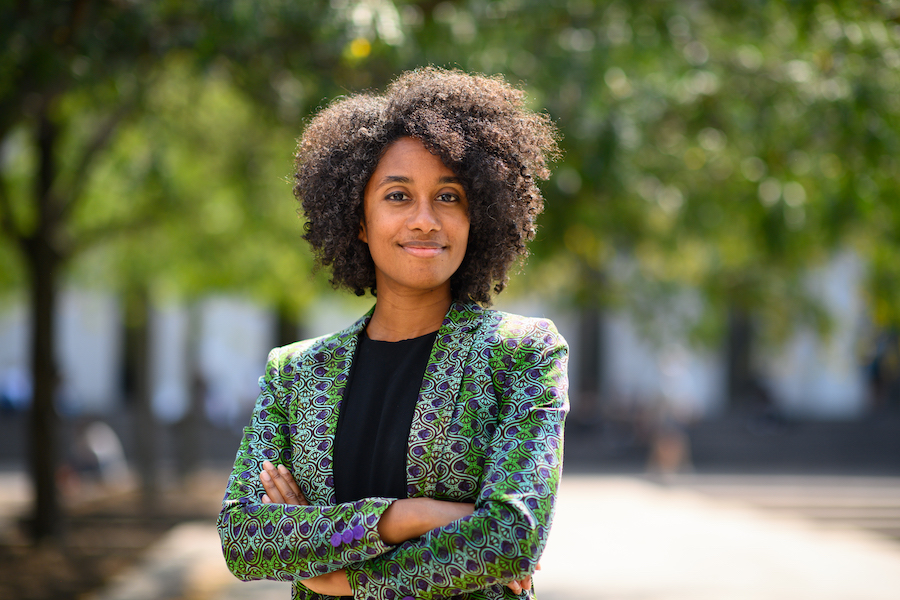 Fleisher: When African Americans were escaping the social, economic, and political restrictions of the Jim Crow South, they concentrated in specific places like Detroit, Chicago, and Baltimore. What was drawing them to those cities?

Ellora Derenoncourt: There were multiple forces that dictated where migrants chose to move and some of the common forces that we might think about are economic opportunities. During this time period you had jobs opening up in the defense industry in World War II and the auto plants in subsequent decades. So, of course, a strong pull factor would be those economic opportunities. Another very important factor for migrants leaving the South was where people from their community migrated. Those social networks were incredibly important in determining where people moved.

Fleisher: One of your mentors, Leah Boustan, has done a lot of work on the labor market effects of Black migrants moving north. Others, like Raj Chetty, have looked at the long-run impacts on kids who move to places with more opportunities. So what question are you asking with this paper that moves some of the research forward?

Derenoncourt: I was very much influenced by these two strands of research. Looking at the map of upward mobility for Black families in the US today, you notice that there are these patches throughout the country that are low mobility zones, and those are precisely the former Great Migration destination cities. And that was very striking to me because the Great Migration was all about moving to better opportunities. And we knew that it was beneficial to migrants to move. But looking today, these same locations are some of the worst places to grow up as a Black child in America. So I wanted to understand how that came about.

Fleisher: African Americans who moved to some of these northern cities could basically double their earnings. But there was a muting effect for the generations that followed. You say that 27 percent of the upward mobility gap between Black and White families in northern cities can be explained by what happened after the Great Migration. How did you determine this?

Derenoncourt: The key question I was asking was comparing outcomes today for children growing up in these former destination cities. How do the outcomes of kids growing up in what were major destinations—so, you can think of Detroit or Baltimore—compare to places that were still destinations of the Great Migration in the rest of the country but received overall fewer migrants coming in. A couple of examples would be Buffalo or Pittsburgh. These places were also important destinations, but they didn't receive quite as many migrants as places like Detroit and Chicago.

Derenoncourt: There are three reasons why ultimately I discovered this was not a leading explanation for why Black children growing up in Detroit have lower adult income than Black children growing up in Pittsburgh. I want to point out that I can make comparisons within groups of cities that had similar industrial structure at the time that migrants were moving in. The first thing is that I can actually control for the share of the labor force that was employed in manufacturing in these locations as of 1940 at the start of the wave of migration that I focus on. Then just holding that constant, places that have a similar industrial structure but that received more Black migrants in this period, how did they compare to places that were less affected by the migration?

The other thing to note is that while we do have this idea that migrants moved for job opportunities, it's not like they had a map of where the industrial jobs were. Another very important determinant of where the migrants went is just where people from their hometowns had already migrated. I found that this ends up being the more dominant factor in predicting where people move than the industrial structure. At the outset, there's not as strong a correlation as you might think between where migrants moved and the share of the labor force in manufacturing. That was the second clue that this wasn't going to be the major explanation for my findings.

The third piece of information that was important here is if deindustrialization were the most important factor explaining poorer outcomes in former Great Migration cities today, I would expect that White individuals who grew up in working class families would also exhibit lower upward mobility in these locations. What I find in fact is that the results are really concentrated among Black children and among Black boys in particular. The effects are much more muted among kids from White families. So that was another indication that deindustrialization really couldn't be the whole story.

Fleisher: But you did find evidence that White flight was a factor driving these effects.  How did White residents leaving affect the upward mobility of Black people generations later?

Derenoncourt: I tried to understand all of the ways that these destination cities changed and transformed in the wake of the Great Migration. There was a movement of White residents from inner city neighborhoods to suburban neighborhoods. I also documented a movement of White children out of the public school system and into private schools. And this increased racial segregation, both in residential neighborhoods and in the education system, I believe, is one of the key factors behind why outcomes look so different in these locations today and why racial gaps in outcomes are worse in these locations today.

I'm certainly not the first person to link segregation to greater racial disparities. People studying this note that this can be associated with differential resources or quality of educational institutions across Black and White kids. They've also noticed that segregation is correlated with crime and the overall quality of the neighborhoods that Black children are growing up in. I think all of these forces are at work here, and certainly one of the impacts of the Great Migration was to exacerbate this phenomenon of White flight and segregation.

Fleisher: What are the implications for policies that encourage families to move to opportunity?

Derenoncourt: My research has two key insights for this particular type of policy. The first insight is that these policies tend to affect a really tiny fraction of the population. A big question that arises is what would happen if you were to scale a policy like this. The Great Migration is in my view kind of the biggest natural experiment in moving to opportunity in US history. It involved millions of Black individuals leaving a low-wage, low-opportunity region and migrating into high-wage, high-opportunity places in the country. The general equilibrium effect of that much bigger migration wave was in fact to ultimately erode the gains that could be gleaned from moving to these high-opportunity locations. That was because of the reaction of the destination cities. So today, when we have policies that move a tiny fraction of families, we might not reach the point of eliciting this kind of response. But it does give us some warning about the ability to scale these kinds of policies.

The second insight is that while this neighborhood-effects literature has been really powerful, it can give rise to this black box around neighborhood effects where we're so focused on moving kids from bad neighborhoods to good ones that we almost forget the ingredients that go into making a neighborhood good. I always like to say that it's not the soil or the air in a place that makes it a good neighborhood, but actually the decisions of local residents and local governments that foster good outcomes or worse outcomes in a place. One of the lessons that we can learn from the Great Migration, from studying how these places changed, is that we can get some sense of what those ingredients are.

I found that rising segregation and White flight seemed to make outcomes worse, so did rising crime, and so did the response of local governments to those social problems. What I observed was greater investment in policing, no greater investment in these metropolitan areas in education, health, sanitation, etc., and rising incarceration. When we think about public policy response to urban decline, there was a very specific punitive response in Great Migration cities. I do think that has left a lasting scar in terms of how well these places can foster mobility.

“Can You Move to Opportunity? Evidence from the Great Migration” appears in the February 2022 issue of the American Economic Review.