A cash and employment conundrum

Most employees would be excited to hear their company is raking in cash. But it could actually be a sign of trouble, according to a paper in the July issue of the American Economic Journal: Macroeconomics.

Authors Philippe Bacchetta, Kenza Benhima, and Céline Poilly found that there is generally a negative relationship between employment and cash holdings.

“Our main starting point was to see that when firms were holding more cash, they were also reducing their employment,” Bacchetta said in an interview with the AEA. “This was a puzzle to us.”

Economists think of cash as “expensive.” Businesses should be investing as much money as they can—and even borrowing—to get future returns for their stockholders instead of sitting on currency and Treasury bonds that only earn a couple of cents on the dollar.

Our main starting point was to see that when firms were holding more cash, they were also reducing their employment. This was a puzzle to us.

If a business is bringing in money, why not start new projects, build new factories, and hire more workers?

The researchers noticed the conundrum as unemployment soared during the 2008 financial crisis. Companies like Apple and Google were grabbing headlines with their growing billion-dollar piles of cash. Businesses across the economy were behaving similarly—if not at the same scale or for the same reasons.

After digging into flow-of-funds data, the authors found that the correlation between employment and the cash ratio—the proportion of cash to total assets—was -0.43 on average from 1980 to 2015. In other words, employment dropped as companies’ cash reserves grew. There was also a strong negative correlation in the more granular, firm-level data from Compustat over the same period, reinforcing their central finding.

Crucially, the period they studied saw several disruptions to financial markets. Companies parked their profits in safe, liquid assets during each crisis, then drew them down as the economy recovered. Only when business got back to normal was cash and employment positively associated, just like standard theory would suggest.

More cash, less workers
The chart below shows the co-movement of the corporate cash ratio (the red dashed line) and employment (the black solid line). Both data series have been filtered to remove any trend and employment is expressed in logarithms. After the most recent crisis in 2008, cash holdings surged as employment plummeted. 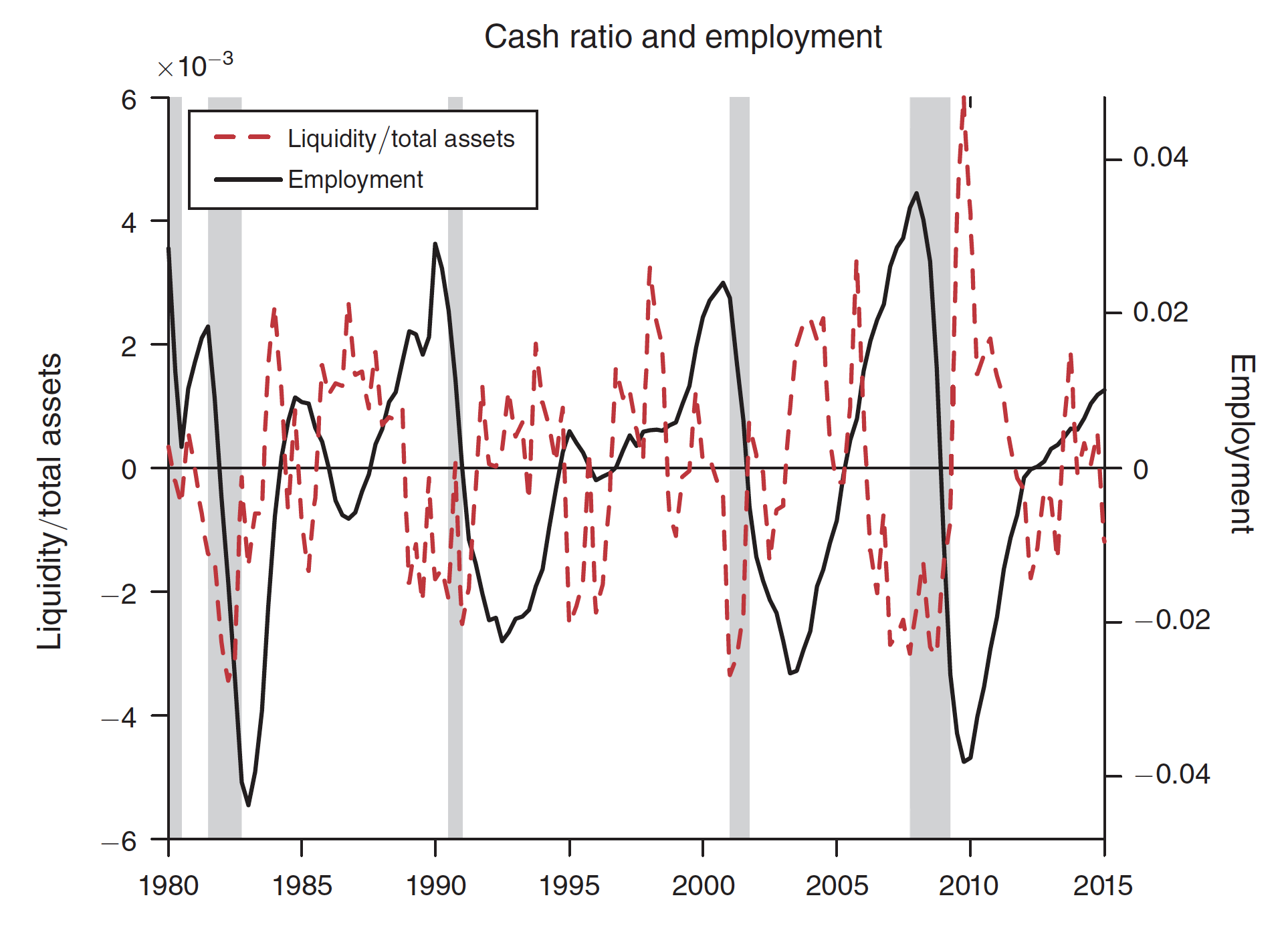 The authors were able to explain this dynamic between cash and employment using a macro model with corporate cash holdings and so-called liquidity shocks—features that many models fail to take into account.

The model they used was quite complicated but the underlying intuition was straightforward.

When companies do well under normal circumstances, they make more money and hire workers. But this connection breaks down when short-term financing from banks and financial markets dries up. Firms either can’t borrow at all or raise funds quickly enough, so they demand more cash and let workers go. And since employee wages are a short-term liability for businesses, the layoffs help relieve monthly funding shortfalls.

The advantage to building a macro model is that it can be used to study the overall financial stress in the economy.

“We don't observe problems with credit lines directly,” Bacchetta said. “At the macro level, we don't know whether on average credit lines are more difficult to get.”

Other work has used the authors’ model to create an index of financial conditions. And there’s potential for this to help financial regulators and central bankers better gauge the health of the finance sector.

In the end, many factors may contribute to firms’ decision to stockpile cash and cut back on growth, but lousy financial conditions go a long way to explaining the data.

“Corporate Cash and Employment” appears in the July issue of the American Economic Journal: Macroeconomics.

If companies' tax burdens were reduced, how much of an impact would it have on business investment?