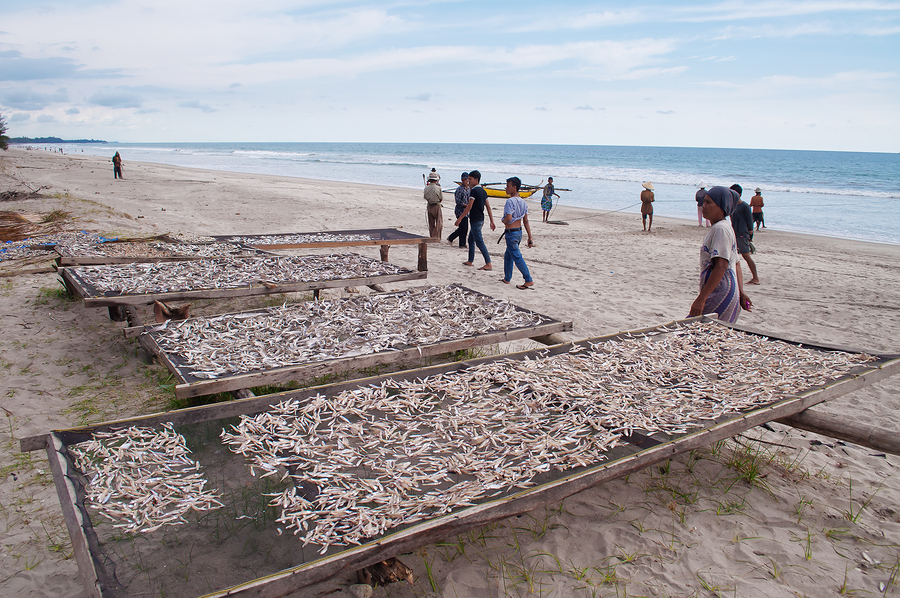 Fish drying on the beach in Pantai Tiku, Indonesia, December 25, 2013. The fishing industry is a major component of the Indonesian economy, employing over 6 million people.

The connection between climatic turmoil and conflict and crime is well-documented. Disruptive climatic changes can reduce government revenues and cripple the state’s ability to enforce the law or suppress insurrections. Weather can also affect conflict by shifting commodity prices in conflict-riven countries like Colombia, where gyrations in prices for coffee and oil driven by weather patterns were shown to spur violence. Heat waves have long been thought to lead to interpersonal violence as well, perhaps because the heat promotes testosterone production or induces metabolic changes that bring out hostility and suppress cool-headed thinking.

It’s also likely that climate shocks can lead to crime by disrupting regular income streams and edging formerly upstanding citizens into the illicit economy. This pathway has long been suspected but is often hard to prove, usually because adverse weather like droughts or heat waves change so many things at once, not just economic opportunities. A study in this month’s issue of the American Economic Journal: Applied Economics investigates the economic fallout of subtle climatic changes in Indonesia’s coastal waters to see if they can explain a recent spike in piracy.

In Income Opportunities and Sea Piracy in Indonesia: Evidence from Satellite Data (PDF), author Sebastian Axbard gathers localized data on fishing conditions, fish prices, fishermen income, and piracy attacks covering an eleven-year time span. He argues that a straight line can be drawn from poor fishing conditions (as measured by satellite data on sea surface temperatures and chlorophyll concentrations) to reduced income opportunities for fishermen in the area to pirate attacks on international cargo ships nearby.

Axbard explains that there is good reason to believe that changing opportunities for fishermen in particular could lead to more piracy because many of the raiders that operate in Indonesian waters are actually fishermen who are moonlighting as pirates.

[The measure of fishing conditions] relies on a marine biological literature which has shown that the amount of fish in a specific location can be estimated with satellite data on specific oceanographic conditions in that area. These conditions are in turn determined by complex environmental interactions of sunlight, temperature, and nutrients in the water.

Most pirates in this region use the same small, shallow boats to carry out their attacks that fishermen use in their daily work, and the typical assailants carry knives or small arms rather than military-grade assault weapons. Fishing for pelagic fish off the Indonesian coast and conducting raids on vulnerable cargo ships in the open ocean actually require a similar set of skills and equipment, so if you have a fishing skiff and a knife and know how to use them, you have most of the requisite skills to be a pirate.

Piracy can be lucrative; successful pirates are usually able to make off with the personal belongings of the sailors on a large cargo ship and perhaps the contents of the ship’s safe, with the typical haul ranging between $10,000 and $20,000 for a successful attack. Even once the loot is divided between five or ten people, the typical pirate can make the equivalent of a year’s salary for a fisherman off one attack.

Compounding the problem, fishermen are unusually prone to swings in income, according to a study of poor laborers in Indonesia. Researchers found that annual monsoons seasons and the resulting storms leave fishermen in some parts of the archipelago unable to work for months at a time. Local crime bosses and full-time pirates have taken advantage of economic distress among fishermen and recruited from this underemployed labor pool. Today, Indonesia is an epicenter of a global surge in piracy that costs shipping companies billions each year.

This notion of economic pressures turning fishermen to crime fits into the economic understanding of crime as a rational act as pioneered by Gary Becker in a seminal 1968 paper that argued that would-be criminals weigh the net benefits of criminal pursuits against the net benefits of earning a living in the legitimate sector.

Axbard constructs a measure of fishing conditions by determining the fraction of ocean waters in each region that have moderate sea-surface temperatures and moderate chlorophyll concentrations in each month. He finds that this measure is negatively correlated with local fish prices (indicating abundance) and positively correlated with average incomes for local fishermen.

When the fish aren't biting, pirates more likely to strike
Monthly data on fishing conditions and piracy from 285 coastal districts in Indonesia during 2012. After adjusting for location, season, and weather conditions, the author finds that attacks decline by 40% when fishing conditions are above average.
Note: number of attacks reported within 30 nautical miles of coastline.
Source: data provided by Axbard (2016)

Next, he analyzes the connection between fishing conditions observed in different sections of oceans surrounding the Indonesian archipelago and the number of reported pirate attacks as cataloged by U.S. military intelligence. Certain places or times of year with bad fishing conditions may be more likely to have pirate attacks for unrelated reasons, so Axbard controls for district and seasonal effects as well as sailing conditions like wind speed and wave height.

After crunching the numbers, Axbard finds that when fishing conditions are above average for a given area and time of year, the number of pirate attacks nearby falls by 40% and the chance of any attack falls by 20%. He also finds that pirate attacks increase when conditions were unusually bad in a particular area twelve months before, suggesting that fishermen are remembering last year’s catch when they consider whether to participate in pirate attacks.

The author also reports a slightly more promising finding: the effect of fishing conditions on piracy is much less pronounced in more developed parts of Indonesia that have seen greater growth over the past decade (as measured by nighttime luminosity observed from satellites). This reinforces the hypothesis that piracy is motivated by a lack of good economic opportunities in the legitimate sector, and is less of a draw in regions with more robust growth.

Could fishing conditions be influencing crime in some other way that has nothing to do with the economic plight of fishermen? Axbard argues this is unlikely, because the oceanic conditions that influence fish availability are driven by relatively obscure oceanographic events such as currents called upwellings, which dredge up cold water and nutrients from the bottom of the ocean. These localized processes have nothing to do with other factors that might affect piracy rates, such as the volume of international cargo shipping or the intensity of anti-piracy enforcement.

Speaking of which, Axbard also studies the effect of enforcement efforts, taking advantage of a major 2005 anti-piracy initiative by the Indonesian military. Operation Octopus was an effort to combat piracy in the Strait of Malacca, a major international shipping lane that had recently been declared a “high risk area” by the Joint War Committee, a London-based organization that helps to set marine insurance premiums.

Patrol intensity increased suddenly in one area of Indonesian waters while most other areas were unaffected, allowing for a test of the efficacy of these efforts. Comparing the patterns of pirate activity in both the Strait of Malacca and elsewhere in Indonesia in the months after Operation Octopus commenced, Axbard finds that anti-piracy patrols were actually more effective in the high-risk areas where fishing conditions were poor.

While Axbard notes that average fishing conditions have been slowly trending downward over the past decade’s worth of data in Indonesia, the effect is not nearly large enough to explain the recent surge in piracy since 2009 on its own. Some other larger factor is driving most of the increase in attacks, so the increasing piracy problem in Indonesia can’t be blamed squarely on climate change.

Even so, the findings are a cautionary tale about what could happen more widely if fishing conditions continue to worsen or are dramatically affected by climate change. The economic dislocation associated with climate shocks can evidently be a powerful inducement to crime. ⧫

“Income Opportunities and Sea Piracy in Indonesia: Evidence from Satellite Data” appears in the April 2016 issue of the American Economic Journal: Applied Economics.