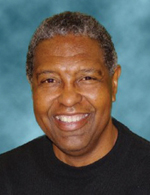 Although he grew up in an affluent home, William A. “Sandy” Darity, Jr. learned about poverty, inequality and social injustice from his parents. They taught him early on that people do not struggle because they make bad decisions; people are poor because our society creates poverty. These continued to be important issues to Darity, and when he went to college, he took economics hoping to discover reasons why some people are born into lives of deprivation. He was surprised and disappointed to learn most answers from economists of the day involved only variations of human capital theory. So, Darity says, “with the hubris of youth,” he decided to become an economist to change the way economists think about poverty and inequality.

As a child, Darity lived with his parents in the Middle East where his father worked for the World Health Organization. They returned to the States when Darity was eight, and his father went back to school and became the first African-American to earn a Ph.D. from the University of North Carolina at Chapel Hill. The family moved to Amherst, Massachusetts where Darity went to junior high and high school. From there, he earned his bachelor’s degree at Brown University in economics and political science, graduating magna cum laude with honors in both. He received a Marshall Scholarship which he used to attend the London School of Economics for a year. In 1975, he entered MIT and finished his Ph.D. in economics within just three years. (The only other person to do so is economist Paul Krugman.) Darity began teaching economics at the University of Texas at Austin in 1978 and was tenured in 1981. He moved to UNC Chapel Hill in 1983 and worked there for twenty-four years. For eight years he alternated semesters between UNC and Duke University before moving to Duke full time in 2007.

Darity has been a fellow at the National Humanities Center, the Centro de Excelencia Empresarial in Monterey, Mexico, and at the Center for Advanced Study in the Behavioral Sciences at Stanford. He has been a professor at several colleges and universities. For a year he was the William and Camille Cosby Endowed Professor at Spelman College. He is the editor in chief of the most recent edition of theInternational Encyclopedia of the Social Sciences, and is associate editor of the most recent edition of the Encyclopedia of Race and Racism. He was a member of the American Economic Association's executive committee and is a former president of both the Southern Economic Association and the National Economic Association.

One of the most rewarding parts of his career has been working collaboratively with other scholars on problems of mutual interest. His research covers a wide variety of subjects including comparing the status of dalits and tribes in India with blacks in the USA, ethnic conflict, ethnic diversity and economic development, racialized tracking in schools, employment guarantees, relative position, happiness, and well-being, and race, religion, and health disparities. His current focus is on “Stratification Economics,” a combination of sociology and economics which provides an alternate approach to thinking about inequality between class and ethnic groups. Darity hopes his and others’ work in this area will widen exposure to this new way of thinking across the economic profession and beyond.

In 2012, Darity received the Samuel Z. Westerfield Award from the National Economic Association, the highest honor that organization bestows. The award acknowledges outstanding scholarly achievements and public service by an African-American economist. In his acceptance speech, Darity reviewed the “USA’s long tradition of violating or grossly manipulating its own laws, particularly when those laws are intended to improve the lives of black folks.” He alluded to the Humphrey Hawkins Act of 1978 that calls for full employment and that the public sector must provide jobs if the private sector cannot. Since the government has not complied with this Act, Darity has proposed a National Investment Employment Corps to provide work for all who want to work. He wants every American to have a guaranteed job earning at least $23,000 a year with $10,000 in benefits, including federal health insurance. He believes this is one way to combat poverty and the destruction it brings to families and our country.

In fact, Darity says a highlight of his career came in January of this year when MSNBC reported that close to half the American public now favors a federal job guarantee. Although he has argued for years that the federal government should provide guaranteed employment at non-poverty wages, the idea has received little support. He was inspired to see a plurality of those who responded to the survey believe in such a proposal.

Through his extensive research, innovative proposals, and teaching young economists to think differently, Darity continues to fulfill his mission of changing the way the economics field treats poverty and inequality.

A salon and parlor game of the 19th century, made most famous by Marcel Proust's answers, the Proust Questionnaire (adapted here) gets to the heart of things....

My parents, my father and my late mother.

Not mastering the chromatic harmonica at a young age. Not learning how to write regression programs in the languages most commonly used today.

The births of each of my sons.

I have two aphorisms that I created:

"Things can always get worse."

After a great deal of persistence on my part in helping to promote this policy, it is now being able to see a growing momentum in support of the federal job guarantee. It would be wonderful also to witness a growth in support for reparations for African Americans and/or baby bonds for all Americans.

I love being a professor, apart from having to grade papers. I would be thrilled to head a major research institute devoted to the study of and design of solutions to inequality.