An Economist Who Profits From the Past

Trevon Logan, the Hazel C. Youngberg Trustees Distinguished Professor in the Department of Economics at The Ohio State University 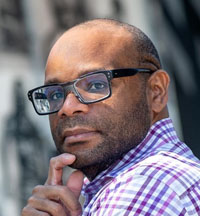 Economic historian Trevon Logan has made his mark on a number of topics that don’t sound like they belong in the same sentence. Segregation, sports betting, sex markets.

As an economic historian, Logan studies and measures trends of the past, digging into a range of topics to understand how history has informed the present.

Through all his varied academic pursuits, one thing comes first: genuine interest. After all, economic history is a field for the intellectually curious. Each question Logan poses aims to bring light to topics unknown or clouded by misleading conventional wisdom. The answers, while raising even more questions, reveal how economic processes are shaped by long, complicated histories.

“Usually, if you consider a historical question, it begets another question,” Logan says. “I’m sympathetic to wanting nice, short answers, but I have a preference for things that are a little messy, because it allows history to shine through.”

Despite his passion for the field, Logan likely would not have become an economic historian, or even an economist, had it not been for an African-American labor history course he took as an undergraduate at the University of Wisconsin at Madison. The class was taught by the former labor director for the NAACP, Herbert Hill. It introduced him to the power of empirical research.

“I’m always driven in economic history to find new facts,” Logan said. Today, at the root of all his work, are two questions. What can we measure? And can we measure it accurately?

Recently, he measured how segregation levels have changed over time in rural areas of the United States. Academic literature is rife with narratives about urban segregation, but Logan suspected there was much to be illuminated when it came to rural history. Looking at neighborhood-level “complete count” Census data, Logan discovered that rural areas also became increasingly segregated from 1880-1940.

“The entire nation was becoming more segregated, and it wasn’t confined to the South or to places where African Americans were leaving,” Logan says. “This is an important piece of American history.”

Logan’s personal family history landed his parents in a large middle-class black community in St. Paul, Minnesota. The youngest of three sons, Logan grew up in the house where his parents still live. After getting his undergraduate degree in economics at Wisconsin, he received dual master’s degrees in demography and economics at UC Berkeley, where he also got his Ph.D. He now teaches at Ohio State University and is a research associate for the National Bureau of Economic Research. He served as the youngest president of the National Economic Association (NEA) in 2014.

Logan’s work has also taken him to the White House. At a meeting organized by Lisa Cook of the President’s Council of Economic Advisers, Logan advised officials on measuring living standards for different households. Rural, over 65, or Latino, for example, are likely to be more or less sensitive to changes in particular prices.

But before he launched himself into academia and advising, Logan took a year off after college to work in the equipment finance division at Wells Fargo.

“In hindsight that’s probably one of the best experiences I’ve had because it gave me a better perspective on graduate school itself,” he says. At an impressionable age, taking time off to work gave Logan a chance to figure out what he has interested in, away from the pressures and biases of other academics. It helped him realize that grad school was, indeed, for him.

Someone once told Logan “there’s absolutely no reason you should get involved in academic life unless you’re passionate about what you’re doing,” and he’s found the advice to hold true. Scholars spend a lot of time “looking for external validation of your questions”—whether through funding or publication—“but if you yourself don't care about it, those external awards aren’t worth it,” he says.

Logan credits strong mentors with helping him carve out his academic interests. Demographer Ronald Lee, his dissertation advisor, motivated Logan to ask the questions that interested him. Economist William “Sandy” Darity demonstrated to Logan how to be a supportive mentor and create opportunities for other people.

It’s a task Logan takes particularly seriously. “One thing that is immediately obvious is the relative isolation that racial and ethnic minorities can have in a graduate program.”

Time and again, Logan has seen economics lose bright students to other STEM fields, where they have more representation and programming tailored to their interests.

“One thing we don’t talk enough about is the culture of the field, and the ways attitudes and experiences in the field can lead students to select out of it,” he says. “Economic history is probably the least diverse field of economics, full stop.”

As president of NEA, which supports minorities in the profession, he worked to increase research experiences for students of color and women. But despite a general focus on diversifying the pipeline into economics, Logan has long been conscious of how obstacles persist throughout a person’s career. During his tenure at the NEA, he organized a research conference for mid-career economists from underrepresented groups. Logan had watched many of his peers become stymied after receiving tenure, and wanted to boost professional development opportunities.

“Economists,” he jokes, “should be the most discerning of the market forces” that could draw someone away from the field. Like all topics that interest him, it is one Logan will continue to tackle.

What’s on your nightstand?
An iPad, because every night before bed, I take a 10-minute lesson from a foreign language app. And although I do not wear a watch, I keep one on my nightstand. It was a gift from my nephew. I’m a historian, so I need some old technology, I guess!

What is an ideal day?
I like to wake up very early. I’d work out in the morning then lounge around for a bit, probably building a LEGO set while watching television. I’d meet some friends for brunch, go to a museum or the movies, and take a long nap. I’d play with my dog outside, then have a nice dinner with family and friends. And then I’d like to make my own brownies for dessert.

What historical figure do you most identify with?
From his writing, Alain Lock, because he was someone who was struggling with a whole lot of theoretical issues that I don't think he ever fully got worked out. He was an English professor talking about the “New Negro,” and the ideas he had are some I have too.

What trait do you deplore in people? Tardiness.

What trait do you most admire in people? Discernment.

What is your greatest extravagance?
One of two things: either my extraordinarily extensive LEGO collection—I have 125 sets or so—or my bag collection. But I use a backpack day to day.

What is your airport vice? Gum.

Who’s your favorite hero of fiction or movies?
The heroine of one of my favorite books, Meg in “Belonging” by Deborah Kent. Meg is blind and being mainstreamed into high school.

What’s the hardest thing you’ve ever done? I had to read the eulogy at the funeral of someone I was very close to.