The Efficiency Rationale for Diversity in Economics

Dr. Samuel L. Myers, Jr. has studied economics since he was a child. His home was one of the best research facilities and libraries to be found by a grade-schooler because Myers grew up surrounded by the books, research, and philosophies of his father, a well-known African American economist, Samuel Myers, Sr.

Myers, Sr. studied under John D. Black, John Kenneth Galbraith and Joseph A. Schumpeter at Harvard where he earned a PhD in 1949. He was an economist at the U.S. Department of Labor, economics professor at Morgan State University, and financial adviser to Latin American countries during the Kennedy Administration. He was president of Bowie State University during turbulent years; in 1968 he successfully dispersed a student boycott. His work with President Jimmy Carter on Executive Order 12232 in support of historically black colleges and universities was a high point in his career. In 1994, Myers, Sr. received the NEA’s Samuel Z. Westerfield Award. Clearly, he has made significant contributions to the economics profession. 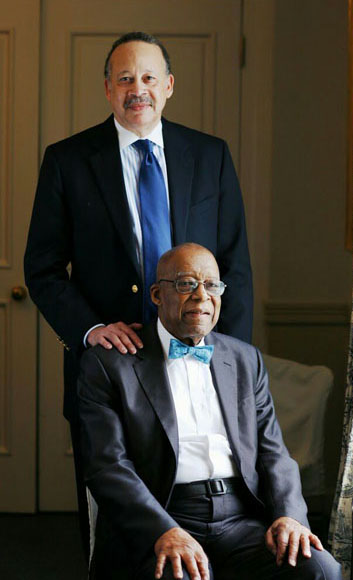 Perhaps the greatest of these contributions is his son, Samuel L. Myers, Jr., who has distinguished himself in ways of which Myers, Sr. must be most proud. From studying at his father’s knee, Myers went on to graduate with pride from Morgan State University, a historically black college where his father taught and where his sisters also graduated. He then earned a PhD in economics from MIT in 1976.

The climate of the 1960s and 1970s prompted Myers to study the role that economics can play in solving problems facing the African American community. He helped change how African Americans view economic science. Myers says, “Increasingly, economic analysis is seen within the community of color as an important vehicle for advancement and progress.” This shift in perceptions has been gratifying for Myers and other economists who were “originally motivated by the need to help resolve some of the crises facing our communities.”

Now a national authority on disparity studies, Myers has been a visiting scholar, lecturer, and economics professor at several prestigious institutions. F. Ray Marshall, the Secretary of Labor during the Carter Administration, lured Myers to the University of Texas at Austin for his first tenure track position. He served as a Senior Economist at the Federal Trade Commission, as a consultant to the U.S. House of Representatives, and as president of both NEA and APPAM. He was a Fulbright Scholar at the University of South Australia, and a Fulbright Fellow with the Chinese Academy of Social Sciences.

Myers specializes in the impacts of social policies on various groups, and he pioneered the use of applied econometric techniques to examine particular racial disparities. In 2008-2009 Myers went to China to apply his techniques and extend his exploration of the economics of diversity. He analyzed the effects of China’s diversity initiatives on 55 ethnic groups in the areas of income inequality, educational reform, and disability policies. Myers now compares his findings from China with U.S. diversity initiatives.

Since childhood, Myers has spent his life in pursuit of the answers that economic science can provide to important social and political questions. He believes diversity in the field of economics can help provide some of those answers. He states, “Part of the case for diversity in the profession is to increase the quality of the economic science that should arise from including more diverse experiences among those doing the science.” Regarding issues that minority groups often face, Myers says, “Analysis of these problems and the search for successful solutions can benefit from insights brought by talented scholars whose life experiences intersect with these problems.”

In fact, Myers’ own life experiences intersect with problems that are not well analyzed. While reviewing proposals on disability and other forms of diversity, Myers, who is deaf, was surprised to find few papers on the economics of disability and almost none about the relationship between race/ethnicity and disability. Myers says, “Until I mentioned these issues in meetings, no one else seemed to notice.” He adds, “I doubt whether my disability alone explains this contribution that I have made; but it might have taken much longer for me to reach this conclusion had I not experienced disability myself.”

Myers believes that “people who can become economists …can also become many other things. The skills and the tools that economists need require the mind-set and talents that can also prepare a person well for law or business.” For instance, during a recent interview by the African American Registry, an on-line storehouse of African American heritage, Myers was asked what advice he gives to passionate young people who want to become policy makers. Myers said he “cautions” them about becoming elected officials because campaigning leaves little time to delve deep and find alternatives to solve issues. Myers claims, “We need a slightly different involvement in the public arena… not just the implementation of public policies, not just the political support for the public policies, but the analysis of public policies.” He urges youth to “prepare themselves with some critical analytical thinking skills—tools that place them in the position to question and to dig deeper than just the surface discussions about policies. … And that means taking statistics, calculus, and economics.”

For Myers and Myers, Sr., encouraging young people from diverse backgrounds to study economics helps ensure the field will represent and address issues faced by minorities. In 1972, Myers attended a meeting to discuss the results of a summer program for minority students in economics. He says, “I distinctly remember the question being raised as to whether it even made sense to have a minority summer program. The question was ‘what is the economic efficiency rationale for this program?’ I have been thinking about that question ever since.”

Perhaps one could say Myers and his father have been answering that question all along.

A salon and parlor game of the 19th century, made most famous by Marcel Proust's answers, the Proust Questionnaire (adapted here) gets to the heart of things....

What is your idea of a perfect day?
Teaching a class of graduate students in public policy about market failure and engaging them in an exercise designed to develop tools of problem structuring and applied policy analysis. And, then, at the end of the day having at least one student come to my office to say, "You know, Professor. I got it!”

What’s on your nightstand?
The remote control.

How do you treat/indulge yourself?
Caviar and champagne at Petrossian on West 58th Street.

What trait do you most deplore in others?
I try to be very accepting of others as they are.

Whom do you most admire and why?
My father. Because of his intellect and his life-time commitment to reducing poverty and inequality.

What will you never forget?
A horrible multiple-truck accident in Panama in the mountains between Colon and Panama City in 1963. Everyone died or was injured except my father and me.

If you weren't in economics, what would you want to do?
Economics, of course.