The Fed, Financial Literacy, and a Very Active Retirement 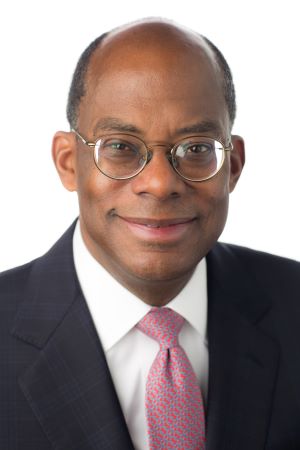 While his peers were idolizing the Beatles or Roberto Clemente, a teenage Roger Ferguson had his eyes on another hero: Andrew Brimmer, who in 1966 became the first Black governor of the Federal Reserve.

Many years and a lot of hard work later, Ferguson himself was nominated to the Fed’s Board of Governors, eventually serving as the board’s vice chairman from 1999 to 2006.

Ferguson’s father, who’d grown up during the Great Depression, had a keen interest in banking and small-scale investing, and the family’s kitchen table talk about those issues were top of mind for Ferguson when Brimmer was nominated to the Fed.

“That really sparked my interest because I had been talking to my father about interest rates,” Ferguson recalls. “The Federal Reserve was this very large, important organization that I knew very little about, but clearly it had something to do with interest rates and Andrew Brimmer was an economist. So I thought, OK, if you're interested in interest rates, you must want to be an economist. So I went to college knowing that I was going to major in economics.”

He headed to Harvard, earning a bachelor’s degree and a Ph.D. in economics, along with a law degree. “My mother told me to stay in school as long as I could,” Ferguson says with a laugh. “I doubt that she imagined that I would follow her advice so fully!”

He was an attorney, then consultant, until his nomination to the Fed Board of Governors. With the Fed, he led efforts to increase transparency, with the Fed’s now-routine statements explaining decisions from the Federal Open Market Committee (FOMC) just one of the results. He also helped encourage Congress to pass Check 21 — the Check Clearing for the 21st Century Act — in 2004, which allowed banks to process check information electronically, paving the way to the smartphone banking commonly used today. But the most important work he did for the Fed, Ferguson says, took place on Sept. 11, 2001, and in the days and weeks afterward.

As the most senior Fed official in the Washington, DC, headquarters when the terrorist attacks began, Ferguson was in charge of the Fed’s initial response, electing to keep the Fed open and operating and assuring banks and the public that money would continue flowing through the system. “We used all the Fed’s tools to really keep the shock of the terrorist attack in Washington and New York from becoming a panic in financial markets or trading,” he says.

None of those actions were part of a playbook, Ferguson says, though recent updates to contact info and responsibilities during Y2K planning came in handy. But amid all the confusion and concern, Ferguson and others at the Fed kept their goals in mind.

“It was not a moment of panic so much as uncertainty and then very intense focus on the things that we had to do,” he recalls. “The goal was to keep people — and institutions and traders and individuals in the financial sector — from worrying about whether or not there was liquidity.”

That sense of focus and duty served him well in his post-Fed career, first as the head of financial services at reinsurance provider Swiss Re and then as president and CEO at financial services company TIAA for 13 years. Along the way, he learned a thing or two (actually, far more than that) about leadership.

“My experience is one learns how to lead, and you have to find out your leadership style and cadence, and what comes naturally to you,” Ferguson says. “In my case, I developed a theory of leadership that is basically around followership. You cannot be a leader if you don't have people who want to follow you.”

People follow leaders who have expertise in their field, of course, but also a sense of purpose and direction. And empathy and fortitude go a long way, too, he explains.

Ferguson retired from TIAA last year, but he’s far from idle now. He’s the Steven A. Tananbaum Distinguished Fellow for International Economics at the Council on Foreign Relations and serves on several boards of directors, including for Alphabet, Corning, and Memorial Sloan Kettering Cancer Center. He is also a regent of the Smithsonian Institution.

But even “retired,” technically, he still keeps a close eye on the health of the national economy, and continues to think about things like financial literacy, which has been a career-long concern.

“We are bombarded every day with opportunities to buy goods and services. We are bombarded with opportunities every day to invest in a range of assets, including some that are very speculative — think about Bitcoin, etc. We also have many individuals with student debts to manage. And so people's financial lives have become more complex, not less so, and our degree of financial literacy hasn't kept up.”

Frustration edges into Ferguson’s voice as he admits to not having the solution to such a complex, pervasive problem. But he urges support of the people and groups working to improve financial literacy among all populations, and he’s nowhere near finished with his own contributions to economic understanding and transparency — even in so-called retirement.

“I'm having the retirement that I wanted,” he says. “I've got friends who are geriatricians, and they said one of the ways to stay young and vibrant and healthy is to stay involved and engage with what you find fascinating, and that’s what I'm doing.”