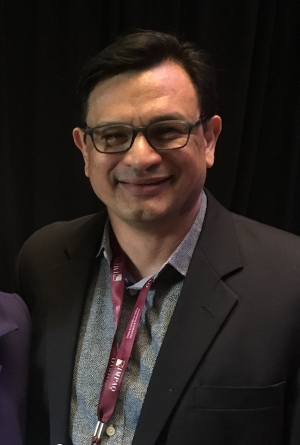 Growing up in a single-parent household in a sugarcane plantation town in Hawaii where money was tight was an early introduction to budget constraints for Randall Akee, though he didn’t know the term for it at the time.

But the lessons stuck with him, as did his desire to learn more about the economic forces at work in his own life and in the world around him. These interests led him to enroll in an Advanced Placement Economics class in the all-Native Hawaiian high school he attended. The teacher piqued his interest even further with this loud-and-clear message to the class: “You Native Hawaiians need to take a stronger interest in economics, because otherwise Mr. Charlie will get you.”

So Akee, now an associate professor in the departments of Public Policy and American Indian studies at UCLA, headed to Dartmouth College with an economics major firmly in mind. He continued his exploration of economics at Yale, then Harvard, at each step focusing on how economics affects people and groups that standard research often overlooks.

His early work kept his efforts close to home, quite literally. In the State of Hawaii’s Office of Hawaiian Affairs’ Economic Development Division in the late 1990s, he looked at programs that could help the economic outlook of Native Hawaiian communities at a time when the sugarcane and pineapple industries were in steep decline.

Issues impacting Native and Indigenous peoples have remained a focus of Akee’s research. Another area he’s explored is the effect of casinos on children living on Native American reservations. In some cases, revenue from casinos goes to tribal governments to fund housing, schools, and services in the community. Some tribes also designate cash payments to members, which functions as universal basic income payments. What Akee found in his studies of such payments in one tribe is that “when you make households and families less poor, their children achieve more.” They attain higher levels of education, and, as adults, are more civically engaged. And their parents don’t tend to work any less, he says.

Of course, his study focused on just one small group, as did a different research project that focused on immigration patterns among Micronesians — who face little to no immigration restrictions to the U.S. given Micronesia’s Compact of Free Association with the U.S. government. The people who were moving from the Federated States of Micronesia, in the western Pacific Ocean, to Guam and Hawaii at the time of his research tended to be highly skilled, with above-average education levels, which indicated that these immigrants tended to be positively selected.
“And those were the things that were interesting to me,” he says: “Who is leaving and who are they leaving behind, and then what are the secondary issues because of that?”

While small groups may seem somewhat insignificant, Akee has learned that insights from such studies can really say a lot.
“That's been my take on how I do my research from the beginning,” he explains. “People have said, ‘Why are you studying this? This has no value to the economics profession.’ And I've always claimed, ‘Ah, but it does.’ It's interesting and important in and of itself, but beyond that, it can also inform us about broader fundamental questions that we care about in economics.”

Another group, somewhat larger, that Akee thinks about a lot is economists themselves. At the Allied Social Science Association annual meeting in early 2020, he participated in a panel hosted by AEA and convened by former Fed Chair Janet Yellen titled “How Can Economics Solve Its Race Problem?”

The problem, as Akee sees it, is twofold: First, studying the economics of race or ethnicity isn’t a standard field in economics. It gets tucked into labor economics sometimes, but rarely is accepted as its own valid field of study. “That affects how others see the profession as being open or not,” he says. “Because if you're interested in this as a Ph.D. student going into it and there's no place for you, then why wouldn't you go into political science? Or why wouldn't you go into sociology or anthropology for your career? … Having it be an accepted area of research and acceptable to conduct research on this and to publish on this and to get tenure with this is going to be important in the future for attracting a broader array of individuals.”

To help support more economic research of underrepresented groups, Akee and some colleagues recently launched the Association for Economic Research of Indigenous Peoples (AERIP), which will sponsor networking and events and advocate for this area of study.

The second problem is that the profession tends to “replicate itself,” he says, with those in authority tending to promote people who look like them professionally and come from a similar background when it comes to doctoral program admissions, mentoring assignments, job recommendations and tenure decisions. Decision-makers may find “the outsider or the unusual person” harder to evaluate and to recommend. One potential way to solve these problems is through implicit bias training, which can help decision-makers see beyond what’s established and comfortable and make room for more perspectives.

“One of the things I'm interested in is opening the door for more underrepresented minorities in the economics profession,” says Akee. “Because I think we all benefit from having a broader range of people in the profession across genders, across national origins, across backgrounds of all types, class types as well. So I'm quite interested in that and I'm happy to support that.”

A salon and parlor game of the 19th century made famous by Marcel Proust’s answers, the Proust Questionnaire (adapted here) gets to the heart of things....

What’s on your nightstand?
Two mystery novels and my Kindle.

What is an ideal day?
Early morning at my local coffee shop. Working from there and home.

What trait do you deplore in other people?
Selfishness.

What trait do you most admire in people?
Selflessness.

What is your favorite extravagance?
Baked goods.

What is your worst habit?
Baked goods.

What is your airport vice?
Baked goods.

Mountain or beach vacation?
Both.

What’s the hardest thing you’ve ever done?
Getting a Ph.D.