Enduring the Pain and Getting Through it: One Man’s Path from the Boxing Ring to the Economics Profession

Professor and Director of The Murphy Institute, Tulane University 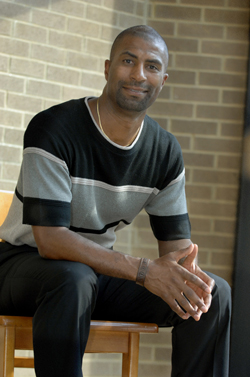 Stepping into the ring isn’t something that many economists can say they’ve done. Nor can they say they’ve had their bell rung by an aspiring Olympic boxer. Gary “Hoov” Hoover can.

Hoover was a boxer at a Milwaukee community center and joined the Army right after graduation. “I wasn’t quite convinced that I was quite the scrub that I actually am,” he said.

Stationed at the base in Fort Carson, Colo., home to the Olympic training grounds for boxers, he continued to spar—and got his clock cleaned by an Olympic contender. “He hit me really hard,” Hoover said recently from his office in Norman, Oklahoma. It would toughen him up for his graduate school days at the University of Washington in St. Louis.

“That was a bloodbath,” he says of his time studying for his PhD. “They really beat me up.”

Hoover had become interested in economics as a teen. “I had a mother who worked a couple of jobs,” he said. “She always said, if you work hard, you’ll make something of yourself.”

But as Hoover watched his mother juggle those jobs, he began to understand that something was wrong with that story. “No one works as hard as my mother,” he said, “and yet we were always broke. Clearly this idea of working hard wasn’t enough.”

His high school social studies teacher encouraged him to take economics, and it was there that the light bulb clicked on.

“I said aha! This makes more sense.” He was learning how the labor market worked, and realizing that “there’s a whole class of better-paying jobs that my mother and I weren’t ever going to have access to, no matter how hard we worked, because we didn’t have the skill set.”

“I realized then, It’s time for the kid to go to college.”

After he was discharged from the Army, he returned to Milwaukee. With money from the GI Bill, he enrolled at the University of Wisconsin-Milwaukee.

The Army made him realize that he did not want a future being “bossed around by incompetents,” so graduate school was looking better and better. His advisor pushed him toward a PhD in economics, even though he wasn’t sure that math was his thing.

“I’m not one of those quant guys,” he says. “It takes me twice as long to get it, and Wash U was known as being a quant house. They crank it out. I should not have been there.”

But he drew on what he’d learned in the boxing ring and in the Army and stuck with it. Hoover said that both the Army and the boxing ring had taught him to “endure the pain and get through it. It certainly wasn’t innate intelligence. I just worked hard.” He earned his PHD in 1998, and is now a full professor at the University of Oklahoma.

In many ways, Hoover’s research today returns again to that question he pondered in high school: Why isn’t hard work alone enough?

For decades, the argument was that a rising tide lifts all boats. Any policy that helps the economy grow aids the poor and working class, the theory goes, and then those groups can benefit from their own hard work in jobs created by the growing economy.

Yet, while the benefits may trickle down to the bottom slots, it’s still only a trickle by the time it reaches the bottom. A lot of water has been siphoned off along the way.

“People say, this policy will, on average, help the economy. But my question is, the average hides a lot. It could be because the top is helped but the bottom is hurt, yet on average it looks ok. So we need to ask, how will different groups be affected? Where does the majority of the benefit—or the majority of the hurt—go?”

“Everyone may be benefiting,” he said, “but if 99 percent of the benefits are accruing at the top and the remaining 1 percent are left to be divvied up, then we should question that policy.”

After all, despite the spoils, we’re all in this together, he believes. “If we’re all in a rowboat,” Hoover said, “and there’s a hole, it doesn’t matter what side the hole is on. Eventually it’ll sink us all.”

More recently, he has turned his attention to a very different pursuit: ethics in the economics profession. It started when he was reviewing a journal submission and realized that the language sounded awfully familiar—because it was his own. He had been plagiarized. He alerted the journal editor and figured the plagiarizing scholar “was toast.” But, he said, “nothing happened to him in the end.”

It was enough to make Hoover wonder, how widespread is this? It turns out, that it happens a lot. And it’s not just plagiarism. It’s intimidation, coercion, and extortion, too. “An untenured guy is getting ready for tenure and a tenured professor pressures him to add his name to a paper or he will vote ‘no’ on the tenure decision. It happens more times than you think in this field,” Hoover said.

Hoover’s work is not always readily accepted by economics audiences, because many find it hard to believe this kind of coercion and corruption actually happens in their field. “By the time I’m done [presenting], they’re saying, ‘Never invite that guy again.”

That might be why in his spare time, Hoover writes fiction. “Unpublished,” he says. So far anyway. And every summer, he travels to Germany to teach, drink beer with friends, and butcher the language, or so he says on his blog.

What’s on your nightstand? The Great Gatsby. I always thought I liked Hemingway more; now I’m convinced of it.

What is an ideal day? Lounging, by which I mean playing golf all day. Yeah, all day.

What historical figure do you most identify with? He’s not historical yet, but my former dean. He taught me everything I know about leadership.

What trait do you most deplore in other people? Lying, especially when I know it.

What trait do you most admire in the people? Compassion.

What is your greatest extravagance? Cars. I have two cars and don’t need any of them.

What is your airport vice?  Sneaking into the executive lounge. Give me a 40-minute layover and I’m trying to sneak in—mainly because they won’t let me in.

What do you consider your greatest achievement? Being nice in the face of people being rotten to me.

Mountain or beach vacation? Unless the beach has a golf course, I’m not interested.

What’s the hardest thing you’ve ever done? Getting out of grad school. Yeah.