The Economics of Inequality 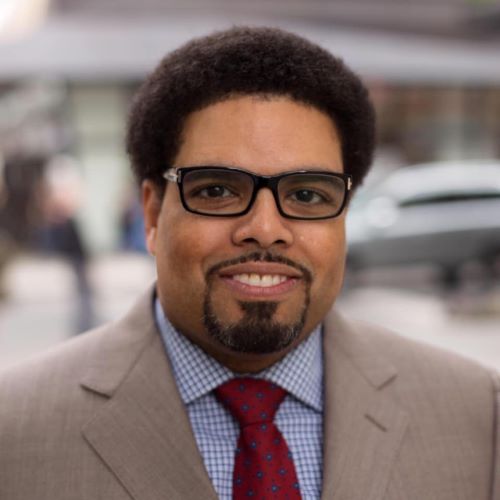 Someone once referred to Darrick Hamilton as a “scholar-preacher,” and with 28,000 Twitter followers, a Ted talk with more than a million and a half views and frequent commentary in news articles and on TV news programs, his sermons, so to speak — as well as his distinguished publication record — have a wide reach.

He wears his role as a public intellectual as a badge of honor, and uses his pulpit, based on his scholarship, to talk about stratification economics, which he describes as “understanding the persistent structural disparities associated with one’s identity as it relates to economic, education and health well-being.”

Traditionally, as economics has looked at what gets distributed, how it gets produced, and how it gets distributed, there has been a giant blind spot, says Hamilton, executive director of the Kirwan Institute for the Study of Race and Ethnicity and a professor in the John Glenn College of Public Affairs at The Ohio State University. (In 2021, he becomes the Henry Cohen Professor of Economics and Urban Policy at The New School in New York City and founding director of the school’s new Institute for the Study of Race, Stratification and Political Economy.) What gets missed is how identity — race, gender and more — and deeply entrenched structural hierarchies affect all three of those central questions.

“We don’t understand group dynamics and power related to those group dynamics, and that’s the void that stratification economics fulfills,” Hamilton says.

Much of his research has focused on ways to disrupt the dynamics that perpetuate an unfair status quo and replace them with economic processes that can open opportunity to all in America. One such solution he’s put forth is “baby bonds” — a program in which the U.S. government would place funds in an account for each baby born in the country based on their family’s income level. The funds would become accessible when the baby reaches adulthood, ensuring every American, regardless of familial wealth or economic status, has the resources needed to attain wealth-building milestones like higher education, homeownership and entrepreneurship. As Hamilton points out, the U.S. government has long provided programs to boost such actions, but people of color have largely been shut out of them.

A program like baby bonds would be “very consistent with American history of a government seeding a population with assets so that they can have economic security in their life,” he says. “What is inconsistent with American history is that it would be done in an anti-racist way so as to ensure that everybody, particularly black, Latinx, and native people, would have access to the resource.”

He’s also researched, and advocated for, a federal jobs guarantee. Like baby bonds, the idea is to address income inequality by opening access to resources. Guaranteed employment would not only help the workers themselves by improving work conditions and lifting people out of poverty or the fear of destitution, he says, but it also would support the country as a whole by directing work toward infrastructure improvements and climate change mitigation.

“It could offer us the ability to reimagine the type of future that we want with public and physical infrastructure,” Hamilton says.

In a paper titled “What We Get Wrong About Closing the Racial Wealth Gap” published in 2018, Hamilton and several co-writers gathered sobering data about modern disparities in the U.S. economy and not just who is affected, but why. And the why is something economists and everyone else have been getting wrong for decades, he says.

“When it comes to understanding inequality, our perspective of deficits within the group that’s underperforming is so strong that we don’t even interrogate the evidence to refute those claims,” he says. “And that paper is powerful in that it prevents and refutes all the notions of inequality that reduce to some cultural, behavioral or self-investment deficit among those that aren’t performing well.”

Hamilton’s view of who gets what in the U.S. economy was shaped early in his life, as he grew up in a modest income family in New York City’s Bedford-Stuyvesant neighborhood in the 1980s. With a combination of family contribution and scholarship money, he attended a private, Quaker-run school, where he saw another side to the story. “My experience growing up exposed me to two worlds,” Hamilton said in a profile for Mother Jones. “A lot of friends that I grew up with, versus some of the friends that I went to school with — I could see that fundamentally they are similar people, but one was exposed to a greater set of resources than others, and it influenced their life outcomes.”

When he started his higher education at Oberlin College, he chose economics as his focus “because I decidedly did not want to have to struggle and worry about resources as an adult.” He initially thought it’d be a good springboard for law school or business school, but then realized he had already found his passion. “The more I engaged with economics, as well as college in general, I realized that, one, I could make a good living and have the agency that I desire being a university professor, and that, two, my identity is really one of a scholar. And then, three, that economics was a way of thinking that was very consistent with how I think about things more generally, trying to address problems given constraints.”

All along, he’s been outspoken about his beliefs and the solutions that form the heart of his research. And he thinks economists and other scholars have a responsibility to go beyond publishing in academic journals, to reach the public and the politicians and all stakeholders in change.

“If not us, then who?” he asks. “I think that the whole system of tenure provides us the cover to not have that threat of unemployment so as to be more vocal to effect change. … Thinking about providing avenues for our work to be publicly engaged is something that the academy and universities could do better at and should do better at.”

And that’s why “scholar-preacher” is a title he never shied away from.

“A knee-jerk reaction might be for a scholar to say, ‘No, no, no, that’s not me,’ Hamilton says. “I didn’t distance myself from it. Instead I embraced the term and said, ‘Well, to the extent that preachers are able to convey messages to a wider audience so as to improve ethics and lives more generally, that is something I wouldn’t want to distance myself from, but embrace.’ But one need not forget the other part of that equation, which is the scholarship. I am still not only guided by a moral compass, but also grounded by the integrity and the rigors associated with being a scholar.”

A salon and parlor game of the 19th century made famous by Marcel Proust’s answers, the Proust Questionnaire (adapted here) gets to the heart of things....

What’s on your nightstand?
There is a bottle of water, remote controls and 12 books. I will list the six that are on top: (1) “Democratic Socialism American Style: We own the Future,” (2) “Race for Profit,” (3) “Race After Technology,” (4) The Worldly Philosophies: The Lives, Times, and Ideas of Great Economic Thinkers,” (5) “Hillbilly Elegy,” and (6) “The Messenger: The Rise and Fall of Elijah Muhammad.”

What is an ideal day?
At this point, a day in which I finish writing a document that was probably long past due (smile).

What trait do you deplore in other people?
I got two — condescension and selfishness, but if I have to pick, selfishness.

What trait do you most admire in people?
Humanitarianism.

Which living person do you most admire?
This is something that changes because I know a lot of admirable and dope people, but right about now, Sen. Bernie Sanders, and it’s because of more than the fact that we share the same birthday (smile).

What is your favorite extravagance?
Unnecessary electronic gadgets.

What is your worst habit?
Sugar.

Maynard Keynes or Milton Friedman?
Out of those two, Keynes — shocker (smile).

What’s the hardest thing you’ve ever done?
I am still doing it, living without my mother.