A Huge Asset: A Labor Economist on the Contributions of Immigrants 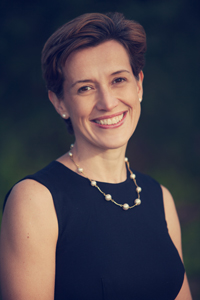 As a professor at San Diego State University, Catalina Amuedo-Dorantes often has students in her economics courses whose parents came to this country as migrant workers.

“I teach economics of immigration, and it is a self-selected group of students who chooses those classes,” she said.

Some, she says, are “DACA kids” or participants in the Deferred Action for Childhood Arrivals program, which allows children of undocumented immigrants to attend school and to work.

“Being Hispanic and living in a border region like San Diego, you are exposed to these issues first-hand, every day,” she says. “And you learn so much.”

As a labor economist, Amuedo-Dorantes studies the impact of immigration policy, particularly immigration enforcement, on immigrant families and their communities. It is work that has become all the more relevant under the Trump administration. She says she is quite concerned about recent rhetoric and new policies that overlook the important contributions that “vulnerable groups make to the fabric of American society.”

“It’s a huge oversight,” she said. “Many times we are blinded by the cost of accepting someone, but we really don’t look further and say: ‘What are the contributions of these individuals?’ Many of them are young people who are going to be contributing to the workforce and the economy. That’s a huge asset. A lot of economies, including Japan and many Western countries, wish they had that.”

As an immigrant herself, Amuedo-Dorantes also has a special understanding of how hard it is to come to a new place and make a new life, although she is grateful for having been able to do so in a very different set of circumstances to those encountered by the migrant population she studies. She came to the United States from Spain for the first time as a teenage exchange student, coming straight from Seville to Grand Rapids, Michigan, at the age of 16. “It was cold and I was in culture shock,” she said. This perspective informed her choice to study migration.

Amuedo-Dorantes was born in Seville and grew up in Cordoba, Spain, in a family of four children. She chose to study economics, she said, because of her father. He was an engineer, a career she was interested in, but he convinced her to study economics because of its wider employment prospects.

The opportunities she had to study abroad greatly enriched her worldview and her career, she said. She studied in Poitiers, France (through the Erasmus exchange program) and later at Western Michigan University, where she earned her Ph.D. She had incredible teachers and mentors who supported her and influenced her work, she said. Her dissertation focused on temporary employment in Spain. Susan Houseman, at the Upjohn Institute for Employment Research, was her main adviser. Later, she would collaborate closely with Susan Pozo, who is the now president-elect of ASHE. The two worked on issues related to international economics that would lead them to study international capital flows (remittances) and labor (migration).

Settling in San Diego, she says, has helped her find home in the US. Its warm climate and cultural mix remind her of Spain. Her husband’s family is Mexican, and they are parents to two young sons, whose lives she feels are greatly enriched by their cultural background and the diversity of their community.

Balancing work and motherhood, she said, has been “tough and is still tough.” She had children later in life and was already a full professor. But still, she advises young economists not to delay parenthood for their careers if it’s something they value, especially for women, she said. “You can always publish an article later on. You can’t always have kids later on.”

“There are certain things in life that are not worth postponing.”

What’s on your nightstand? My iPhone. I like to listen to podcasts at the end of the day. Usually international news.

What is an ideal day? Getting up, reading the New York Times while I have my breakfast, getting out with my kids, walking, getting some California sunshine, going back home and reading. I love reading. Watching KPBS news, watching a movie with my kids and husband on a Saturday night. That’s it. Very simple.

What trait do you more deplore in other people? Selfishness. People who put themselves before others.

What trait do you most admire in the people? Kindness, in terms of time and listening; helpfulness.

What is your airport vice? Having a cold beer.

What do you consider your greatest achievement? My kids and family.

Whose your favorite hero of fiction or movies? I don’t really have one. But the person I admire the most is my dad.

What’s the hardest thing you’ve ever done? Leaving Spain (every time!), raising my kids and saying goodbye to my dad.