An Economist Who Has Learned to Challenge Convention
By Sarah Jackson 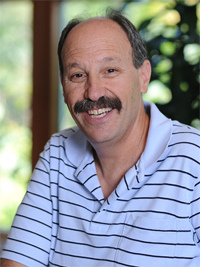 Art Goldsmith is a closet sociologist. At least that’s what his daughter tells him. The Washington & Lee labor economist has for many years used psychology, sociology, and history in his research and teaching in addition to economics. He finds the boundaries between most of the social sciences to be artificial and problematic.

“When I teach economics and conduct research, I draw on insights that can help me get a richer understanding of the questions we are exploring, I don’t worry about the discipline credited with advancing those ideas,” Goldsmith says.

Often those questions involve issues of race and the labor market. Goldsmith, who grew up as the son of working-class Jewish immigrants outside Washington, DC, was drawn to studying questions of race because of his father, who imbued in Goldsmith a structural understanding of the extreme poverty in the low-income black neighborhoods near where the family lived in the 1950s.

“My dad’s explanation, at the time, was that black Americans faced even more discrimination than Jews and immigrants,” he said.

Along with his older brother, Goldsmith was the first in his family to go to college. As immigrants, his parents saw the world as not always just and fair. “They believed education was the best hope for a better life.”

Goldsmith says his parents taught him and his two brothers that “in a world in which Jews were stereotyped, in many ways the best thing we could do was acquire enough formal schooling that would overcome any negative stereotypes we would face.”

But when he got to graduate school and began studying economics, Goldsmith said his father’s view of race and poverty contradicted the conventional view being taught at prestigious graduate programs at the time—namely, that the poor are poor because they “failed to have the foresight or talent to acquire sufficient human capital—education—to succeed,” he said. And that “African American communities were somehow dysfunctional or flawed because youth did not acquire enough schooling.”

“I learned this, but I was skeptical about it. I kept thinking why would parents or kids not want to obtain the attributes that would increase chances for success?”

After joining the economics faculty at the University of North Carolina at Chapel Hill, he met his colleague William “Sandy” Darity, whom Goldsmith admired for his commitment to reading widely beyond economics and his willingness to critique conventional beliefs in economics. Shortly thereafter Goldsmith followed suit and began challenging standard explanations for racial gaps in life outcomes.

He and Darity began to collaborate on papers with a focus on issues of race and socioeconomic mobility. The pair used insights from other disciplines, examining, for example, the social and psychological consequences of unemployment, arguing that joblessness had both economic and emotional costs.

Goldsmith’s work went on to challenge some of the prevailing stereotypes about African Americans and the labor market. For instance, the relatively high rate of unemployment blacks experience could be due to prior discrimination that led to joblessness, which subsequently caused emotional strains, making them less attractive workers to potential employers. Moreover, employers might adhere to this perspective even though jobless African Americans may be more resilient to the emotional consequences than whites. His current work focuses on the role of the family in explaining life course outcomes.

While he likes economics for its analytical structure and the associated hypotheses, these are also the same things that can get the profession into trouble. “It can be very stuck in a set of conventions or standard stories,” he said. “These things have generally been helpful, but young scholars should be encouraged to think of these as stories and always be willing to think very carefully, and challenge them when necessary.” Especially around race, these stories can be very stigmatizing and at times racist, he says.

If you want to tell a story where you are racializing things, you need to begin with a hypothesis that is grounded in a reasonable explanation for why there might be a difference in racial outcomes. This is very important since race is a social construct. I’m opposed to the notion of simply saying “in this study we controlled for race.’”

Goldsmith tries to teach in ways that honor the important insights from other disciplines, not as a way of undermining economics, but as a way of enriching it.

Economics students, he says, will always get plenty of formal modeling experience, but they don’t always get enough practice engaging in critical thinking. He uses his class time and mentoring with students to help them tackle tough topics and engage in deep thinking and listening.

Goldsmith tries to pass on those principles to his own children. “Our family motto is, you are not here to critique how other people live, but instead to learn from them and see where it takes you.”

What’s on your nightstand? The NewYorker.

What is an ideal day? Swimming in the ocean, playing a little golf, listening to some music, doing some social science.

What historical figure do you most identify with? Martin Luther King, Jr. Just because of his focus on social justice and because my kids hold my feet to the fire on that on a daily basis.

What trait do you most deplore in other people? False confidence.

What trait do you most admire in the people? Curiosity and self-reflection, and a willingness to recognize the error in your ways.

What is your greatest extravagance? I raised my kids about a third of their lives on the Gold Coast of Australia.

What do you consider your greatest achievement? Raising two young adults who are now doing meaningful work. They are respectful, loving people who are out there enriching the world, as opposed to only drawing things from it. My wife was a huge partner in that.

Who’s your favorite hero of fiction, movies, or music? Jerry Garcia of the Grateful Dead. What I like most about his music was that it changed all the time. It wasn’t set in its way. That flexibility is a good thing to carry into your work.

What’s the hardest thing you’ve ever done? Get through graduate school.