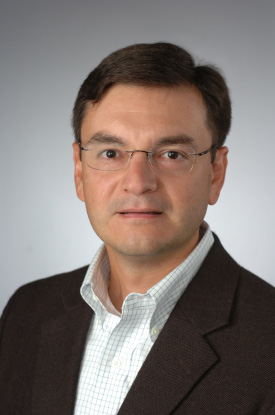 Born in 1973 in Xalapa, Veracruz, Mexico, Flores-Lagunes was in high school when NAFTA was negotiated and the country’s economy was opening up. It was also the first time Mexico had an economist instead of a lawyer as president.

“People were looking at the field then since many things were going right and people were curious,” he said. He was among them.

He decided then that economics was for him. But first, he married his high school sweetheart. Soon a child was on the way, and graduate school was calling. He moved to Columbus, Ohio, to start his graduate work in 1996. He was 23.

The move was tough, he said. He was alone and missing his family, and the classes were killing him. His wife and daughter had stayed behind in Mexico so she could finish her bachelor’s degree. Meanwhile, he had gone right from an undergraduate program to a PhD program and the math demands were tough. “And did I mention it was cold. It was the first time I saw snow.”

But, he said, it was also enriching. “It was a time of a lot of growth, personally,” he said. He persevered with the help of his faith, and his stubbornness. “I am very persistent,” he said, “and very disciplined. I do not give up.”

He has been a professor since 2001, with several moves (mostly to warm weather spots) in between, from Arizona to Florida, Binghamton, NY, and now at Syracuse. “People laughed when I said I was moving from Florida to upstate New York,” he said.

The job has not always been easy, he admits. The field is tough on new recruits, and the critiques can be brutal. But he has learned to remember that the “person is trying to improve your work. For me that’s been useful. But there is no question that sometimes the criticism can feel very personal. I know a lot of people who struggle with that and shy away from presenting because they don’t like that process.”

But his passion for the work is what carries him. “Hard work is necessary,” he said, “but in order to endure the challenges you need passion as a motivator. If you don’t have that motivation, you will not be able to excel.”

Today, his research continues the thread he discovered in college, when he asked the basic question, Why are people paid more than others? He coupled his interest in labor markets and human capital with a passion for econometrics, and today studies the results of large-scale evaluations of government programs, most notably Job Corps.

“I take the open questions and follow up,” he said. “I want to know more about the things that can’t be learned from the experiment itself.”

The Job Corps evaluation, for example, found that blacks and Hispanics fared worse than whites in the job market. He unpacked why. Among other reasons, Hispanics, he finds, tend to live in places with higher unemployment. He also looked at length of participation whereas “the typical study looks just at yes/no participation.”

He and his wife recently celebrated 27 years together. His daughter is now 26 and she is studying early education. Teaching, apparently, is a family gene. “Two of my father’s siblings were teachers, one in rural Mexico and one in a city. My father is a professor of medicine. My mother is a doctor. I have cousins who taught at college level. Most recently his daughter found her calling. “She recognized teaching kindergarten special education as her passion,” he said. His youngest daughter, meanwhile, is studying chemical engineering, though there’s still time to switch to teaching.

And the secret to a long marriage? Patience, compromise, and shared interests, he said. His wife is a fellow economist, and he said, “Our daughters are flabbergasted by my wife and my conversations. We really geek out. They just roll their eyes and leave.”

What’s on your nightstand? My smart phone and a pair of ear plugs.

What childhood book was your favorite and why? Like a Bible for kids, lots of pictures. It was an easy way to find comfort if something wasn’t going right.

What historical figure do you most identify with?  Benito Juarez. He overcame a lot, to learn to read in the first place, then become a lawyer. He was president of Mexico in a very tumultuous time, and with his drive and determination he was able to keep the country together.

What trait do you most deplore in other people?  Arrogance

What trait do you most admire in the people?  Eloquence.

Which talent would you like most to have? Being a deep thinker

Which job would you like to have if you weren’t an economist? Engineer

What is your airport vice? Carmel popcorn.

What do you consider your greatest achievement? I married very young and was able to keep my family together.

Whose your favorite hero in music? John Lennon

What’s the hardest thing you’ve ever done?  Get through the first year of the PhD program.