The Tools for Change 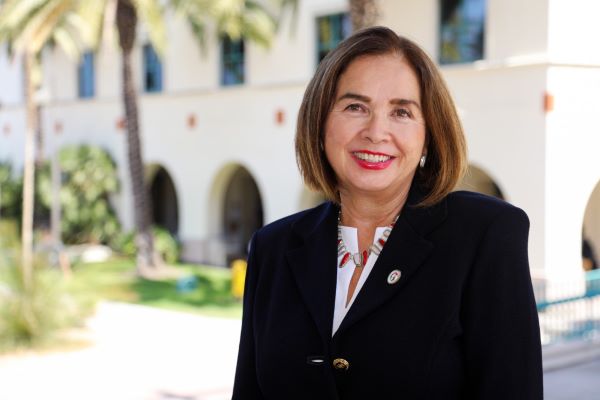 How resources flow (or don’t) to people is at the heart of Adela de la Torre’s economics practice, and indeed her whole life.

From her childhood in a single parent household in the San Francisco Bay Area to her current position as president of San Diego State University, she’s paid attention to who gets what, and at what cost.
“In a single head of household [home], you realize the scarcity that exists,” says de la Torre, whose grandmother came to the US from Mexico. Growing up in the era of the Vietnam War and the protests against it, as well as movements to advance civil rights, environmentalism, and labor, she was moved to do something about it.
“I basically navigated just with an idea that I was interested in things that were going to help me better understand the world and address issues to make the world better,” she says. She started college at University of California, Berkeley, with a view toward science, but it was her economics classes that really opened her eyes. Discussions about policy, paired with mathematical tools and analysis, gave her what she felt she needed to get to work on issues that mattered to her most.

“My own personal life experience as a Mexican American woman became very important to me in really motivating me to address the inequalities I saw within my own community,” she explains. “And economics provided me the tools to better understand it.”

Her dissertation at Berkeley, where she was the first Mexican American woman admitted to its agricultural and resource economics doctoral program, focused on the intersectionality of collective bargaining and the mechanization of the farm labor market. That was just the beginning, but before she dove into her economic research further, she paused her career as her children were born.

“Again, the personal for me really initiated the kind of work that I did, and I realized how difficult it was as an economist, as a woman, to work when you had a baby.” So she began to consider the lives and economic impact of women working on farms — and found there was very little existing data to go on.

“So I started going to labor camps and doing surveys with farm worker women, looking at how women balance their work and take care of children,” de la Torre says. “How does that impact decisions on breastfeeding? How does that impact decisions in terms of balance of work between husbands and wives? Is there unpaid work in housework? As an economist, you're looking at some rational decision-making processes by individuals. But as a woman, I understood that there are life-cycle issues like childbearing, there are family expectations, there's unpaid labor as a wife, as a mother. And that those factors impact how women engage in work, how they view their participation in work, how they view how they are household providers relative to their husbands. And on top of that, I also knew, as a Mexican American woman, that cultural expectations affected that as well.”

Again and again in her research, de la Torre found herself asking questions for which no data existed, so she went out and gathered it herself. Through the Pew Postdoctoral Program at University of California, San Francisco’s Institute for Health Policy Studies, she sharpened her skills in statistics and survey design, and the focus on health policy stuck with her as she continued to center her work around Mexican Americans. She chaired the Chicano/Latino Studies department at California State University, Long Beach; directed the Mexican American Studies and Research Center at University of Arizona and the Hispanic Center of Excellence in the College of Medicine there; and at University of California, Davis, she chaired the Chicana/o Studies Program and served as director of the Center for Transnational Health before becoming vice chancellor for student affairs and campus diversity. In 2018, she became the first woman and first Latina to be permanently appointed president of San Diego State University, a federally designated Hispanic-serving institution (HSI).

“We are very, very committed in our hiring practices to diversity and inclusion,” she says, and she outlines her hopes for bringing in more faculty “who reflect the students that we serve,” including in historically underrepresented fields like economics. Key to that effort, she says, is for existing postgraduate programs to work harder to attract and support women, people of color, and other minorities in their studies. But not every student is willing or able to pick up and move across the country to continue their learning and research. So institutions that serve underrepresented students, like SDSU, also can help by launching postgraduate programs of their own, she says: “I think what we have to understand is, as educators today, we need to go where the students are.”

De la Torre has purposely kept the personal in her professional life throughout her career. It helps her see gaps in existing data and bright pathways to the future. Most of all, it helps her keep the humanity of her work fully at heart.“

All of my work, everything that I look at, is in the lens of the inequality that I either experienced or saw within my community. That was always a motivating factor. If I can understand it, if I can shine light on it, I can possibly create policies that can enhance the economic or lived experiences of these women,” de la Torre says. “So my work is really imbued with this sense of obligation, of community, of impact, and with a real acknowledgement that because there's so few Mexican American women in economics who have these tools — and I was blessed to have them because I was able to get this opportunity and I worked hard to get my degrees — I have a higher obligation to my community to do this type of work.”

What’s on your nightstand?
“Eleanor,” by David Michaelis. It’s a beautiful, challenging, and detailed depiction of Eleanor Roosevelt, and her trajectory from orphan to America’s longest-serving First Lady. I almost always have a similar book on my nightstand. For decades I have enjoyed reading and watching the stories of women who made names for themselves in history, despite facing every expectation to the contrary.

What job would you like to have if you weren’t an economist?
I would like to have been a jazz pianist in another life. I can’t actually play that well, which is unfortunately a pretty important qualification for that career choice, but it’s aspirational! I’ve always been a lover of jazz, and how it embraces and requires both technical skill and an adeptness at improvisation.

What is an ideal day?
This one is easy to answer. Any day where I get to spend time with my husband and my grandchildren, and to hug and hold them in the morning. (My daughters are also great, but they’ve been temporarily surpassed by my grandchildren. I know they understand!)

What trait do you deplore in other people?
Arrogance and narcissism are probably the two characteristics at the top of the list.

What trait do you most admire in people?
Those who are able to accomplish their goals while still holding their family first. This is part of my cultural DNA, and how I was raised. It’s also part of the reason why I have always drawn strength from mi communidad de gente, or my community of people. Whether they are at different universities, in different fields, or in different places in their lives, individuals with this shared trait often support one another, advocate for each other, and look to lift each other up.

It is a tremendous help, in particular, when you are often “first” in a role, in a profession, or in a career. There isn’t a community for you to join, so you have to make it yourself.

What historical figure do you most admire?
Catherine the Great. She broke every rule in the book. She tackled incredibly progressive issues for her era, she broke every social norm, and she never did what she was supposed to. She was never the victim. While incredibly complex, and imperfect in many ways, she ascended to the throne at just 17, and was able to manage a new language, a new culture, a treacherous political structure, and more, and yet still became one of the most influential leaders of her age.

What is your favorite extravagance?
My four dogs, who are spoiled and pampered completely. They are all rescue dogs, all mixed breeds, and with very sad stories to begin with. But they are living lives of leisure now! Bodhie, Frieda, Chiquita, and Moxie.

What is your worst habit?
Once I am deep into conversation in a meeting, I can totally lose track of time. I’ve compensated by building a team around me who do their very best to keep me on schedule, and on to the next meeting, or the next event.

Maynard Keynes or Milton Friedman?
Keynesian all the way.

What’s the hardest thing you’ve ever done?
Loss is one of the hardest things, both personally and professionally. Watching my sister die of ovarian cancer was incredibly hard, and was made all the more difficult by how sudden and severe it was. Professionally, the loss of a good employee or long-time colleague can also be hard, as these are often the people you spend the vast majority of your days with.