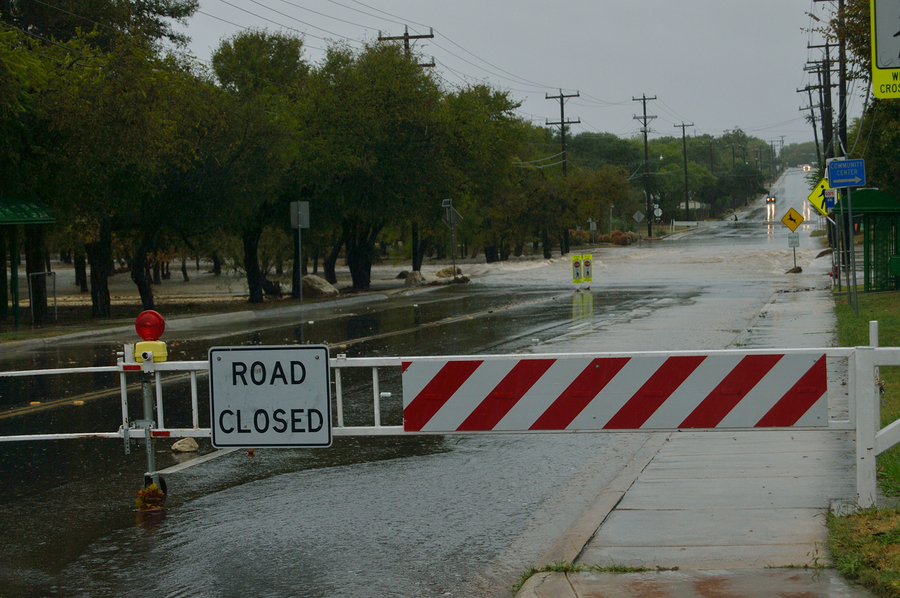 Flooding in the aftermath of Hurricane Patricia in San Antonio, Texas on October 24, 2015. In a typical year, about 8% of U.S. counties are covered by at least one Presidential Disaster Declaration for severe flooding.

Residents along the Mississippi river corridor are recovering from freak off-season flooding that claimed at least 25 lives in Illinois and Missouri and forced thousands from their homes. If history is any guide, the residents who saw floodwaters encroaching on their neighborhoods (or even just heard about flooding on the news) are probably beginning to reevaluate the likelihood of future flooding near their homes, and by extension their decisions about flood insurance.

Behavioral economics research has established that humans have trouble grasping small probabilities and very unlikely events – sometimes those likelihoods are blown out of proportion, and sometimes they are neglected entirely. Media coverage, in particular, seems to have an outsize effect on perceptions of rare calamities. This effect can be devastating if it leaves people underprepared when a (not so) rare disaster comes along. A 2014 article in theAmerican Economic Journal: Applied Economics explores the effect of past floods and the surrounding media coverage on perceptions about future flood risk.

In Learning about an Infrequent Event: Evidence from Flood Insurance Take-Up in the United States (PDF), author Justin Gallagher argues that flood insurance take-up decisions in a community serve as a proxy for attitudes about flood risk there. Since flood insurance is always available from the government-run National Flood Insurance Program (NFIP) and the price tends not to change meaningfully after flood events, any change in demand for insurance can tell us about how risk perceptions are changing.

Gallagher analyzes historical flood records and flood insurance data from the NFIP to see how people living in and near flooded counties have responded to floods in the past, and how the effect of a nearby flood seems to fade over time. To determine which areas have been affected by sufficiently severe floods, he defines a flooded county as one that was covered by a Presidential Disaster Declaration (PDD) in a given year.

Using data going back to 1980, he finds strong evidence of a post-flood spike in insurance take-up. In the year after a county is affected by a PDD flood, insurance take-up rises by nearly 10% and the effect steadily fades over the subsequent 15 years. A similar effect holds in counties with multiple floods in close succession, making for a sawtooth pattern in the data. An analysis with more recent data broken out at the city/town level shows that the effect is even stronger for floods in the immediate vicinity and not just the same county.

The large jump in insurance take-up [after a nearby flood] implies that homeowners do not make a one time decision on whether to purchase flood insurance based, for example, on the risk-based flood maps. The size of the jump is also striking given the long history of past floods in most communities.

Given the ample historical data that is available from flood maps created by the Army Corps of Engineers, we might expect that new homeowners make a one-shot decision when they purchase a new home in a flood zone. Based on the historical risk of flood, the price of insurance, and their own risk preferences, they make a purchase decision and stick to it year after year, come hell or high water.

The large jump found in the data suggests that this is not how people think about flood insurance. Instead, it seems, people update their perceptions of flood risk when new data arrives, in the form of a large flood or a long stretch of dry years.

To model this behavior, Gallagher constructs a Bayesian updating model that incorporates all past flood information since 1958 but also interprets a new flood as a clue that the local area may be more flood-prone than previously thought. Likewise, the model interprets a string of non-flood years as an indication that flood risk had been slightly overestimated. The model updates the homeowner’s perceived risk of flood in the next year in accordance with Bayes' law. This gives a suggestion of how a hyperrational flood insurance consumer might process new data on floods and adjust insurance purchases accordingly.

He also constructs an alternate "discounting" Bayesian updating model that is similar but features forgetting: flood events from years in the distant past are weighed progressively less and less until they are effectively lost. This method is no less mathematically precise than the other model, but it might sync up better with actual consumers' behavior if they focus more of their attention on the recent past or don't have ready access to historical flood data.

The figure below shows a comparison of the two models alongside the empirical insurance response to a PDD flood. The model with forgetting (blue line) does a much better job than the full-retention model (gray line) of matching the observed insurance take-up after a flood event, especially the sharp downward slope and return to baseline levels of insurance after approximately 15 years. The full-retention model predicts that insurance rates shouldn't return to their previous level for about 15 more years.

After a deluge, perceived flood risk rises, then subsides
The red line indicates insurance takeup response in a county after it is affected by severe flooding, 1980–2007. The size of the initial response and its relatively quick fade cannot be matched by a Bayesian updating model where information about all past floods is fully retained (gray line). This suggests that residents “forget” over time and weigh recent flood data more heavily than past flood data when making insurance decisions.
Source: Adapted from Figure 4 and Appendix Figure 5 in Gallagher (2014)

One complication in interpreting this data is that the population in a community is not static over time; people are migrating in and out of the affected county, and over time new arrivals with no personal memory of a past flood event might come to dominate an area. Gallagher finds that communities with significant in-migration show a faster rate of take-up decline after a flood; these new residents are not necessarily "forgetting" but they apparently aren't reacting to the past flood in the same way as longtime residents who remember it personally.

Another finding suggests that the insurance response has more to do with attention and salience than a careful updating of disaster risk: homeowners have a similar reaction to floods in the same media market regardless of the geographic distance of the floodwaters from their home counties.

Gallagher finds an insurance spike not only in the flooded county but also a smaller spike in nearby counties in the years after a flood event. There is a proximity effect for people in adjacent counties or within a small radius, but the author finds that this proximity effect basically disappears when accounting for whether the two counties share a media market.

According to the historical estimates, a flood in a neighboring county that happens to be part of a different media market will have less effect than a distant flood in the same media market that will be covered on the evening news. This is true despite the fact that a flood in close physical proximity to a county is probably more relevant for updating perceptions of flood risk.

Using data from closed captioning transcripts, Gallagher confirms that local news coverage of flooding rises with the proportion of a media market that is experiencing a flood, and that this coverage intensity is correlated with the uptick in insurance coverage across the media market.

This finding reinforces the hypothesis that flood insurance consumers are making decisions based on heuristics and impression rather than poring over historical flood maps of their communities. Ultimately, this evidence suggests that flood insurance subscriptions are likely to surge in parts of the midwest and south this year, and then wane as the New Year Flood of 2016 recedes into memory. ♦

"Learning about an Infrequent Event: Evidence from Flood Insurance Take-Up in the United States" appears in the July 2014 issue of the American Economic Journal: Applied Economics.