Many tax authorities in developing countries have been using electronic data to their advantage in identifying tax dodgers.

Some of us accept it begrudgingly, dutifully recording every bit of reported income required by law and taking no more than our fair share of deductions.

Not everybody is so forthcoming. That goes for individuals as well as large corporations, many of which treat tax dodging as an elaborate game of cat and mouse, costing the US government more than $100 billion every year.

However, the growth of electronic tax filing and the digitization of records have given the “cat” an advantage in recent years. Tax authorities have much more data at their disposal to more easily verify filers’ income with other sources, such as a firm’s customers or business partners. Even smaller developing nations have built IT infrastructures that make them more adept at catching revenue discrepancies on tax filers’ returns.

Yet, even if authorities can prove that a would-be tax dodger under-reported their income, it may not result in any net gain for government coffers, according to a paper in the April issue of the American Economic Journal: Applied Economics.

“Just information alone is not enough,” said Paul Carrillo, a professor at George Washington University who co-authored the paper “Dodging the Taxman,” in an interview with the AEA. “You can have a tax authority. You can build infrastructure for a tax authority in Latin America and Africa….but at the end of the day, besides that information, you also need some sort of enforcement that is credible.”

The paper comes as tax reform in the US becomes a top priority for President Donald Trump’s administration, although it is unclear to what extent those reforms will bolster enforcement. Though the paper looked specifically at Ecuador’s tax system, the authors said it has broad lessons to offer the United States and other developed nations where misreporting by small businesses and self-employed taxpayers is common.

Just like in Ecuador, big data can be used to efficiently uncover those discrepancies and complement other mechanisms for enforcing the law.

“We have all the same problems that we tend to think of in developing countries,” said Monica Singhal, a co-author. “Even though we’re looking at Ecuador, I think a lot of developed countries are facing similar problems.”

Collecting From Corporations
Many poor countries in Africa have similar corporate tax rates as the United States even though they lack the same robust resources for enforcement. However, improved technology infrastructure in the developing world has given those government agencies an edge in identifying tax dodgers. 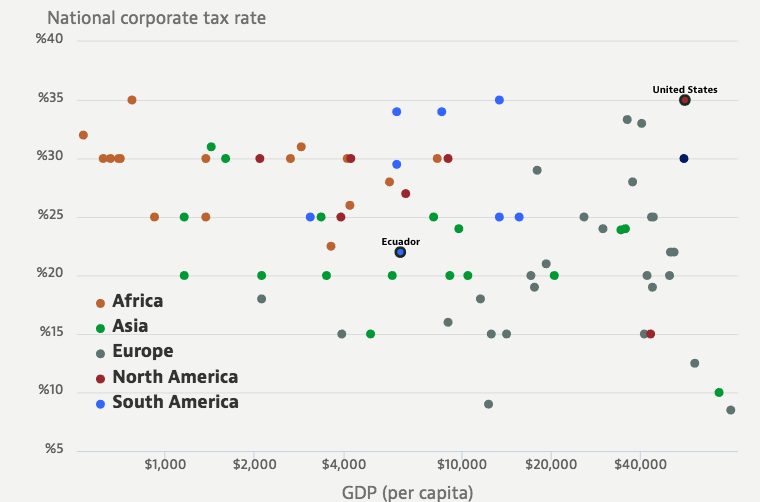 In roughly a quarter of the filings, the company’s self-reported revenue amounts were lower than what the authority was able to verify through third-parties. The mistakes were significant. More than half of notifications involved revenue discrepancies greater than $50,000. The total underreported revenue for both years came to $910 million — and that’s a conservative estimate. There may be other sources of revenue, such as cash transactions, that are going unreported and difficult to verify with third party sources.

The response from firms was underwhelming. Most didn’t bother to respond. Only 10-20 percent of those notified filed an amended return. And when they did, they tended to just match the revenue amounts to whatever the tax authority had said it was. More than a third matched the third party amount exactly and, on average, those that adjusted revenue did so by 93 cents per dollar of notified discrepancy.

We have all the same problems that we tend to think of in developing countries.

The catch is that they also raised their costs by roughly the same amount, offsetting much of the gains in their tax liability from having to adjust for the additional revenue.

This is not to say that investing in technology infrastructure was a waste, Singhal said. In fact, it is critical to helping tax authorities become more efficient at processing discrepancies. But it also has its limits.

Tax agencies cannot simply rely on data alone to identify and correct misreporting, treating it as a substitute for the more expensive and resource intensive audits.

Dodging the Taxman: Firm Misreporting and Limits to Tax Enforcement appears in the April issue of the American Economic Journal: Applied Economics.