What's in a name?

A new convention for name order may be fairer and more efficient.

In economics papers, coauthors are typically listed in alphabetical order. Only about fifteen percent of two-author pairs reverse the order, signifying that the first author contributed more than the second. However, when listed alphabetically, it is impossible to tell whether the first author did more work or the authors shared the work equally.

This is one of many problems with alphabetical order. Researchers with last names higher up in the alphabet are more likely to receive tenure in top ten economics departments. In papers with more than two authors, the et al. convention obscures every name except the lead author. And, earlier names appear at the tops of reference lists, which draws more attention to them.

A new paper in the February issue of the American Economic Review proposes a solution. On their title page, the coauthors list their names in an unusual way: Debraj Ray ⓡ Arthur Robson. The symbol indicates that the order of their names is random. Ray is not listed first because his name comes first in the alphabet or because he contributed more. He is listed first because the two authors flipped a coin.

The benefits of adopting this convention are large, say the authors. And, even if not everyone adopts this at first, it will naturally take hold and become the standard over time.

We want to try to keep the advantages of the current system but make it more symmetric — that is, fairer to people from all parts of the alphabet.

To determine this, the authors created a model of two coauthors, using Jane Austen and Lord Byron as the examples. Using the model, they were able to simulate what happens to the partnership under the conventional alphabetical order and under certified random order.

Under alphabetization, Austen is almost always the first author. Although this may seem unfair to Byron, the default does have an upside: unlike in disciplines where name order signifies relative contributions, economists may be able to avoid difficult conversations about who contributed most by relying on the alphabet.

Of course, Austen can choose to reverse the order for several reasons — a sense of fair play, guilt, the fear that Byron might otherwise refuse to collaborate with her again — or agree to privately randomize and attach a footnote saying so. However, people who come to their work through citations in other papers or through references in seminar slides will not be aware of this footnote, leading to possible misinterpretations of the name order.

Under certified random order, Byron has a greater chance of being listed first, and the symbol — which can also be attached to references — limits the confusion over how significant the name order is. Plus, it would allow outsize contributions from either author to gain special recognition; when the authors do not randomize and decide that Austen should be first, everyone knows it is because of her work — not a fluke caused by her name.

First Of All
Click on the buttons below the chart to toggle between name order outcomes under alphabetization and certified random order. 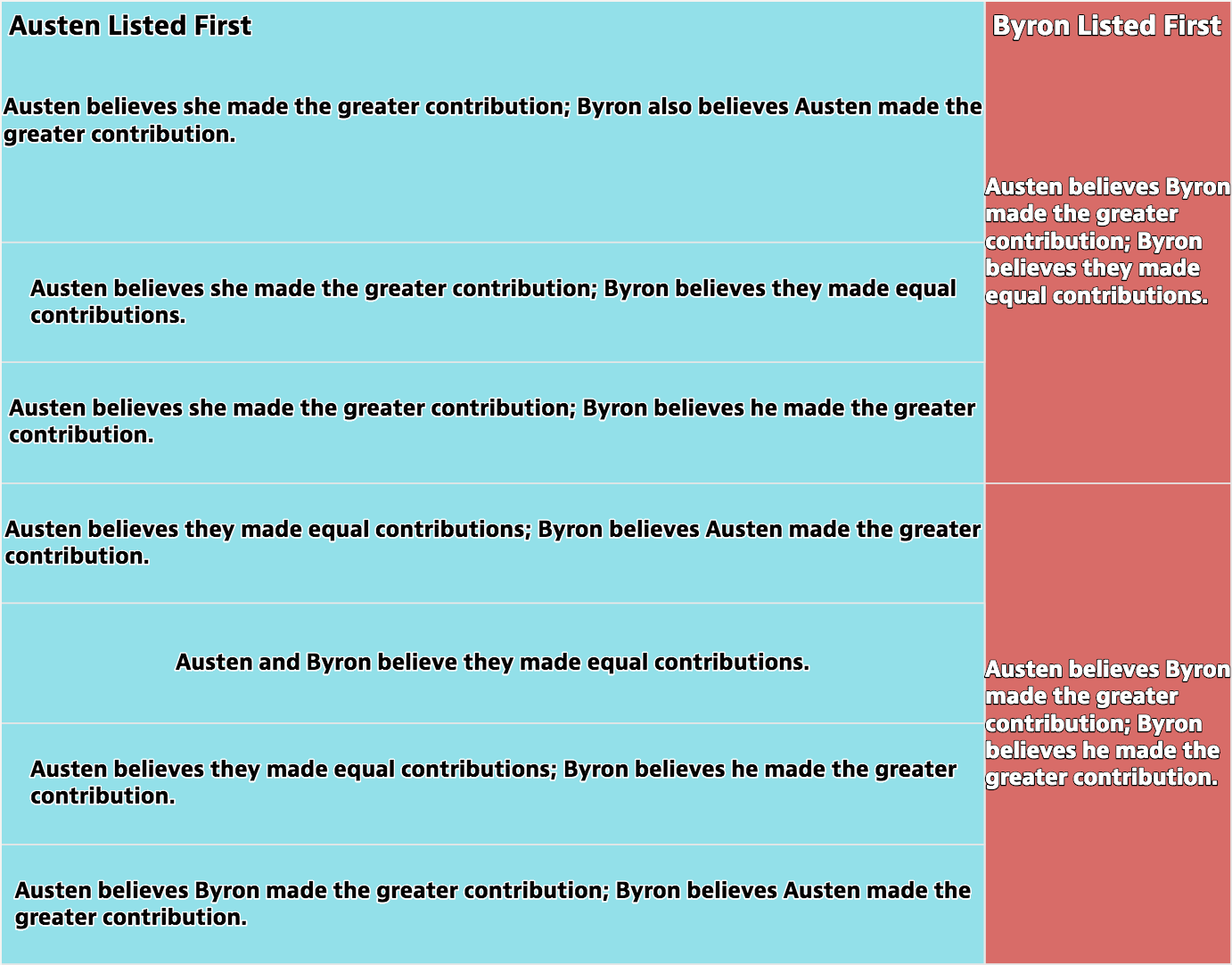 The authors model the take-up of certified random order and find that the new system, if introduced, would see widespread adoption over time, regardless of which journals adopt it first. Although coordinated take-up across journals would speed up the evolution toward certified randomization, it is not necessary for the new convention’s eventual success. Moreover, they provide evidence that certified random order may be more efficient than alphabetization, making all authors better off.

Despite the advantages of this system, there are some potential challenges. Papers with three or more authors would face new decisions. They could randomize some of the names and list the largest contributors in order, or they could randomize across all of the names. They may even be able to randomize tiers of authors who did similar levels of work. Another challenge is the possibility of manipulation. Authors could pretend to randomize, use the symbol, and choose to list the author with the earliest last name first. This way, they would have the perks of getting equal credit while ensuring a higher place on reference lists in future papers.

Certified Random: A New Order for Coauthorship appears in the February issue of the American Economic Review.