The AEA Distinguished Service Award recognizes the volunteer efforts of individuals who have served the profession. This service may have been under the auspices of the AEA, but this is not required.

The award winner will be recognized annually at the AEA Awards Ceremony at the ASSA meetings.  Travel expenses to the meetings, up to $2,000, will be reimbursed. 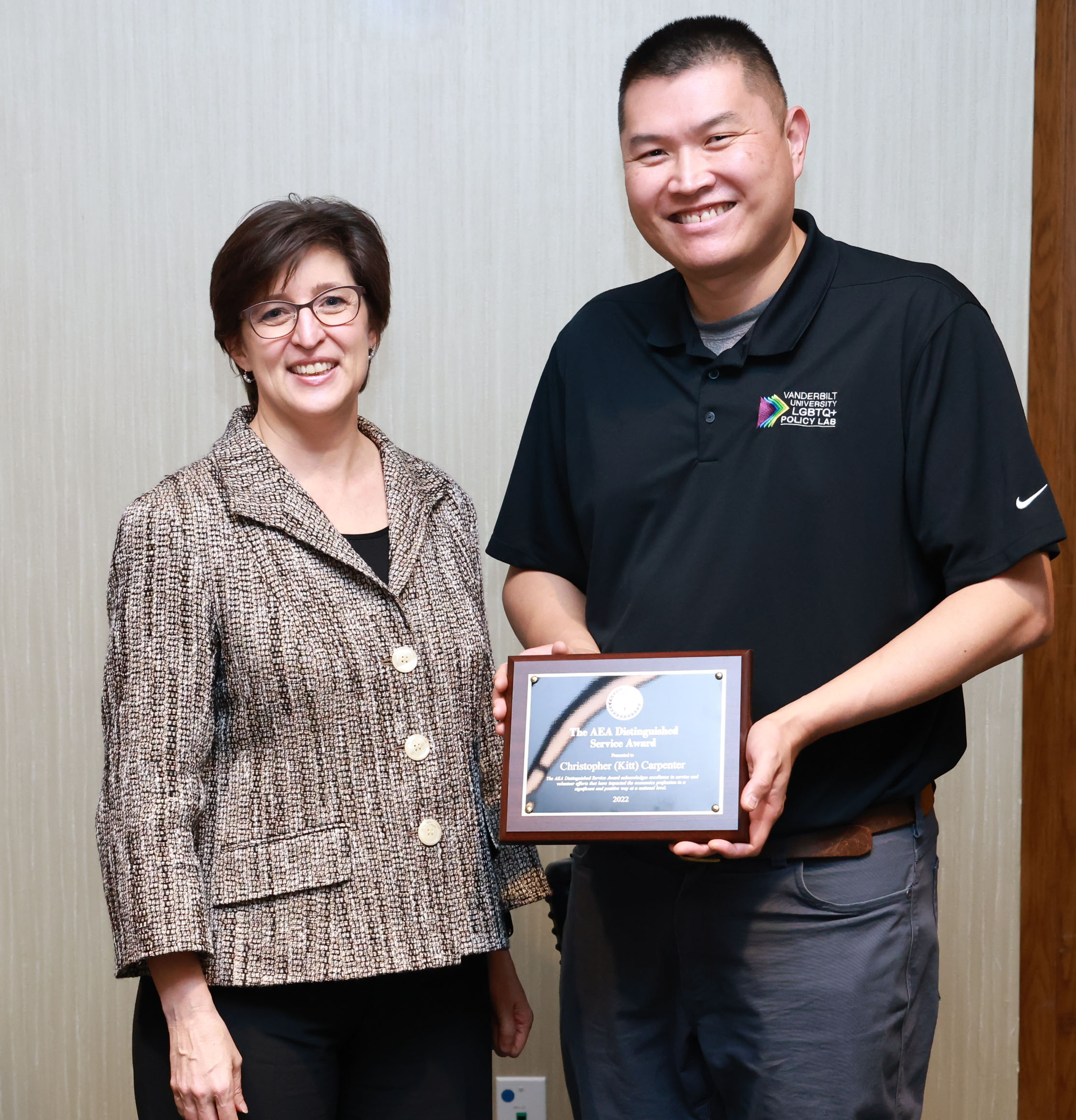 Kitt Carpenter is the inaugural recipient of the AEA’s Distinguished Service Award. He is the E. Bronson Ingram University Distinguished Professor of Economics and Health Policy at Vanderbilt University, Director of its Program in Public Policy Studies, and the Founder and Director of Vanderbilt’s LGBTQ+ Policy Lab. Carpenter is also Director of the NBER Health Economics Program, Editor at the Journal of Health Economics, a member of the National Advisory Council for the National Institute on Alcohol Abuse and Alcoholism, President-Elect of the Association for Public Policy Analysis and Management, and Co-Founder and Co-Chair of the American Economic Association’s Committee on the Status of LGBTQ+ Individuals in the Economics Profession (CSQIEP). He was named the 2021-22 Joseph A. Johnson, Jr., Distinguished Leadership Professor at Vanderbilt for his contributions to Equity, Diversity, and Inclusion. Professor Carpenter has published widely on the effects of legal same-sex marriage, the causes and consequences of youth substance use, and the effects of public policies on health behaviors such as bicycle helmet use, seatbelt use, smoking, cancer screening, and vaccination. His research has been continuously supported by the National Institutes of Health, the Robert Wood Johnson Foundation, and the American Cancer Society. Professor Carpenter's colleagues, students, and the profession at large hold him in high esteem for his selfless and persistent efforts to foster a welcoming environment for all economists and others aspiring to join our ranks.

A nominee must be a current member of the AEA. The service contribution should impact the field of economics in a significant and positive way on a national scale. The length of service time is not as important as the impact of one or several activities. The service to be recognized may comprise a variety of activities, but must be beyond that of a single institution and impactful on a national scale. While this award is conferred by the AEA, it is not expected that service be limited to AEA supported activities.

Nominations are now closed, and will reopen in the fall. Nominees who are not selected are automatically placed in the pool of nominees for the subsequent year for a period of three years. Nomination packets will not need to be resubmitted, but any (brief) updates to materials are welcome.