A Study of Why People Do What They Do 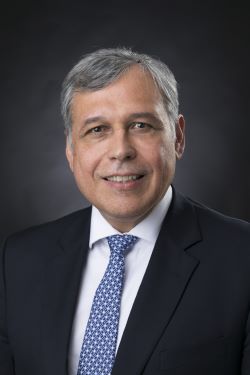 Some people come to economics because they want to put their interest and skills in math to good use. But Alberto Dávila, “a social scientist by heart,” was drawn to the study first by a desire to understand why people do what they do.

“I learned math after I was passionate about econ, not the other way around,” he says. Now, of course, he’s well versed in the math, the social science, and the academic sides of economics as dean of the Donald L. Harrison College of Business & Computing at Southeast Missouri State University. He’s also a founding member and current treasurer of the American Society of Hispanic Economists (ASHE).

As a kid growing up in his native Texas, and then Mexico, Dávila was surrounded by economics — not just in the way we all are, but firsthand as he watched his father return to school for an economics degree. It seemed to Dávila that everyone he encountered with high-level jobs had economics degrees as well.

During college at Pan American University (now called University of Texas Rio Grande Valley) in pursuit of his own economics degree, he got a front-row seat on economics at work via a part-time job at a customs brokerage house on the border with Mexico.

“My job was to do the paperwork, so that trucks with cantaloupe and strawberries and whatever that came from Mexico, I’d cross them over,” he says. “And I would see a lot of people cross illegally into the US. I wondered — this is back in the ’70s — had people really studied why people move from one place to another? It doesn't take econ rocket science to understand that people might move because there were better conditions here. But that became a research question for me.”

Accordingly, much of Dávila’s research has centered on migration, particularly on how enforcement policies impact migration flows.

As he started his economic research on the topic in the early 1990s, he noticed that many US policies aimed at stemming the flow of undocumented workers were based on “this assumption that Mexican immigrants are dumb, that the policy is going to work assuming that they’re dumb,” he says. “For example, the Border Patrol would locate in certain key areas of the border, because that's where Mexicans cross illegally. And I thought, no, they're very rational. If you do that, they're going to go around. If you target the ag industry, they're going to go into another industry. So I spent a lot of time doing research supporting that hypothesis.”

Later in his career, a book project and a chaired professor position shifted his focus toward entrepreneurship — especially as it affects migrants. He dug into why Mexican-Americans choose to launch their own businesses, which then expanded into comparing the factors driving entrepreneurship among Cubans, Puerto Ricans, and other Hispanic groups. He also studied how language skills come into play for Hispanic entrepreneurs, exploring advantages and disadvantages among bilingual and monolingual business owners. Most recently, he’s been studying the economic crisis in Puerto Rico, a project made even more complex when Hurricane Maria hit in 2017.

Back on the mainland, Dávila has had a window to the future of economics in the administrative positions he’s held since the late 1990s — first as economics and finance department chair at University of Texas-Pan American, then as an associate dean in the College of Business and Entrepreneurship at the University of Texas Rio Grande Valley, and, since 2018, in his current position as the business college dean at Southeast Missouri State.

He’s seen student interest in economics flag over the years, as young people set their sights on degrees that have a more obvious pipeline to employment.

“It's not that students don't like economics,” he’s found. “It’s that perception out there that if you are going to get a bachelor's degree in business and something, why not get it in finance and accounting, for example. … The rational student is selecting fields where they think they're likely to get a good job.”

At Pan American, he had some success overcoming that perception by creating a double major that paired economics with finance, giving students exposure to the social science side of economics along with the more practical tools of finance and accounting.

In today’s data-driven world, though, students are starting to see a renewed relevance in the study of economics, he says.

In his work with ASHE, Dávila hopes to attract both students and professors to join the profession and stay there. While diversity is a goal at many schools, he questions how some are going about it. Some schools claim that they’re diversifying as they recruit faculty from South America or Europe, but Dávila wants to open opportunity for Hispanic economists who have come through the American educational system.

“I'm of the view that diversity means diversifying the American populations in higher education,” he says. “And by that I don’t necessarily mean that it's a person who was born in this country as I was, but this is a person who has flourished in the American educational system.”

When Dávila needs a break from that American educational system he’s so much a part of, he and his wife, a provost at University of Missouri-St. Louis, like to travel the world. But even then he can’t fully tear himself away from his curiosity about people and what moves them, that same question that first sparked his interest in economics.

Wherever their travels take them, he says, “I’m the type of guy that's going to sit down in the café and have a glass of wine and just observe people.”

What’s on your nightstand?
A Weevil (from “Dr. Who” spinoff “Torchwood”)

What job would you like to have if you weren’t an economist?
Singer-songwriter

What is an ideal day?
Eating out with my wife and having a glass of wine watching NFL game afterwards

What trait do you deplore in other people?
I am a racist against racists

What trait do you most admire in people?
Humility

What historical figure do you most admire?
General Patton

What is your favorite extravagance?
Flying business first to Japan

What is your worst habit?
Not waking up in a timely manner in the morning

Which talent would you most like to have?
Play piano

What’s the hardest thing you’ve ever done?
Telling the vet that it was OK to put down my beloved dog Jack