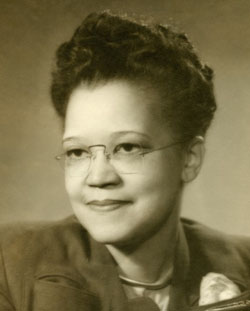 Sadie Tanner Mossell Alexander was the first African American to earn a Ph.D. in economics in the United States, in 1921, from the University of Pennsylvania.  Because of her race and gender, she was denied a regular academic position after graduating, although later in her life she was offered positions at Black colleges that she was unable to accept.  She turned to law, and, in 1927, she became the first woman to earn a law degree from the University of Pennsylvania Law School. At law school, the dean attempted to deny her participation in the law review, but her fellow students insisted that she be given the honor that she had earned.1 She was admitted to the bar in Pennsylvania, becoming the first Black woman to practice law in that state.  She wrote speeches and articles on the economic condition of African Americans2 and was an active and outspoken advocate of civil rights throughout her life.  Julianne Malveaux's powerful analysis of the implications of Sadie Alexander's omission from the economics profession due to race and gender discrimination, published in the May 1991 American Economic Review Papers and Proceedings article "Missed Opportunity: Sadie Tanner Mossell Alexander and the Economics Profession," was the first scholarly discussion of Alexander's dissertation.  Nina Banks's decades-long research into Dr. Alexander's extensive archival records unearthed her unseen life as an economist and led to the recovery of her economic thought.  Her reconstruction of Alexander's speeches is contained in Democracy, Race, & Justice: the Speeches and Writings of Sadie T. M. Alexander,3 published on the one hundredth anniversary to the day of when Alexander received her doctoral degree in economics.

Banks’s extensive research reveals the following information about Dr. Alexander’s economic thought. Alexander’s writings were heavily influenced by her knowledge of economic history, including the role of African Americans in the economic development of the United States.4 She believed that the neglect of African Americans’ contributions, together with barriers to Black education and wealth accumulation, contributed to the false belief—held, unfortunately, by some prominent economists of the time, among many others—that Blacks were genetically inferior.5 She delivered speeches to Black audiences that provided a counter history of African Americans, arguing for a politics of racial pride, personal accomplishment, and community empowerment.6 7 Alexander’s opposition to racial oppression was in the tradition of earlier scholars like Frederick Douglass, W. E. B. DuBois, and A. Phillip Randolph, and focused on racial and economic justice for the working class.8 However, unlike DuBois or Randolph, she never embraced socialism.9 She wrote primarily on inequality and the working class,10 a representative article being “Negro Women in Our Economic Life,” published in the Urban League’s Opportunity magazine. But her interests were wide and extended to areas including business cycles, tariffs, public utilities, and securities regulation.11

In 1923, Sadie Mossell married Raymond Alexander, also a lawyer. She would practice law, including civil rights law, both in partnership with her husband and in her own practice, from 1927 until her retirement in 1982. Her legal career was filled with public service, including serving on Truman’s Presidential Committee on Human Rights, being the first woman Secretary of the National Bar Association, serving for 16 years on Philadelphia’s Commission on Human Relations, and helping to found an organization that became the Greater Philadelphia branch of the American Civil Liberties Union.

Alexander was also the first national president of Delta Sigma Theta, Inc., an international women’s organization that promotes economic, gender, political, and racial equity. Alexander was awarded seven honorary doctorates during her lifetime and more recently has been recognized by several groups of students and recent graduates who have organized to promote the economics profession and to broaden participation in economics by members of under-represented minority groups, including the Sadie Collective and the Sadie Alexander Association at Dartmouth College.

To the best of our knowledge, Alexander is the first economist to be designated posthumously as a Distinguished Fellow. It is not the Association’s intention, however, to set a precedent for future awards. We believe the unusual circumstances—in particular, the denial of opportunity she faced in her career—justify the exception in this case.


Submit to a Journal