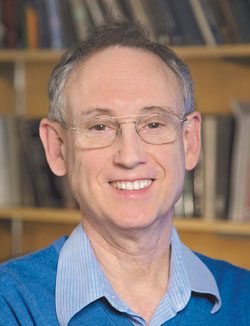 Robert Townsend is the Elizabeth & James Killian Professor of Economics at MIT. Townsend has established himself as a preeminent development economist.

Townsend has taken his theoretical interest in complex situations of incomplete information and imperfect contract enforcement and applied it to problems characterizing developing country markets. A notable example of his early theoretical research is “Optimal Contracts and Competitive Markets with Costly State Verification” (JET, 1979). His work in development economics is characterized by sensitivity to institutional detail, sophisticated use of appropriate economic theory, and careful empirical work.  His first application was to Medieval England, summarized in The Medieval Village Economy: A Study of the Pareto Mapping in General Equilibrium Models (Princeton, 1993).

Townsend’s Frisch Medal-winning paper “Risk and Insurance in Village India” (Econometrica, 1994) proposed that people come close to achieving an optimal allocation of risk in the well-connected and relatively closed economy environment of small villages in India. An ‘optimal’ allocation of risk is one in which all idiosyncratic risk is insured, so that an individual’s welfare is affected only by risk that affects the community as a whole. A prior literature described an array of mechanisms through which people in rural communities insure each other against risk. Townsend combined this argument with formal economic theory and a rich set of panel data from Indian villages to construct a test of the hypothesis that households are completely insured against idiosyncratic risk. The hypothesis is rejected, but only weakly. There is a great deal of informal insurance in these villages. This seminal paper serves as a model of a clean empirical paper tightly linked to underlying theory, and pioneered the use of household microdata to test theories of market imperfections in developing economies.

Townsend subsequently embarked on an extended research program on development and financial systems in Thailand. Townsend has an extraordinary and exemplary commitment to this work. This research involves a close interaction between theoretical and empirical work, with Townsend specifying a sequence of theoretical models, collecting a variety of data appropriate for examining those models, and designing a wide range of empirical approaches to test these models. "Financial Systems of Northern Thai Villages" (QJE, 1995) discussed questions which require further and more extensive field research to resolve. He then did exactly that. He organized a set of large surveys in Thailand, collected secondary data, and made use of the Thai SES repeated cross-sections to address the questions raised by his earlier work. This research program is summarized in two books, Finance in Developing Economies: Evaluation of Policy on Growth, Inequality, and Poverty in Thailand (Oxford, 2011) and Chronicles from the Field: The Townsend Project (MIT, 2014). Townsend makes a compelling case for a nuanced treatment of village level financial systems. A notable paper is “A Structural Evaluation of a Large Scale Quasi-Experimental Microfinance Initiative” (Econometrica, 2011), with Kaboski, which also won the Frisch Medal. The village fund intervention under consideration yielded outcomes which the authors show are consistent with the existence of credit constraints. Their careful econometric analysis is again informed by sophisticated theoretical modeling.

Townsend is a fellow of the Econometric Society and the American Academy of Arts and Sciences, and a member of the National Academy of Sciences. He was awarded the 2011 Laffont Prize.