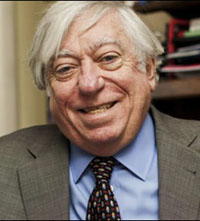 Robert J. Gordon is the Stanley G. Harris Professor of the Social Sciences at Northwestern University. He is a leading American macroeconomist, known particularly for his work on business cycles, productivity growth, long-run economic growth, and the economics of the airline industry.

Gordon’s work in macroeconomics has been particularly notable for its careful attention to issues of measurement. He called attention to important biases in measures of the cost of living, and served on the “Boskin Commission” established by the U.S. Senate to reassess the definition of the US consumer price index. His book, The Measurement of Durable Goods Prices, developed new, quality-adjusted price indexes for investment goods and consumer durables and remains the standard reference on the topic. His work on the measurement of business cycles has included serving for several decades on the business cycle dating committee of the National Bureau of Economic Research. His work on measurement of changes over time in the NAIRU (the rate of unemployment consistent with a stable rate of inflation, a key parameter both in business-cycle modeling and policy analysis) has been widely regarded as the standard approach. His work with Nathan Balke, “The Estimation of Prewar Gross National Product: Methodology and New Evidence,” brought new data to bear on the measurement of business cycles prior to World War II, and dramatically changed economists’ views of the extent to which prewar business cycles differed from those of the better-documented postwar period. Gordon is also well known for his work on the measurement of productivity growth, and its variations both over the business cycle and over longer periods of time. Recently he has played a central role in discussion of the consequences of information technology for US productivity growth and long-run growth prospects.

His contributions to pedagogy include authoring a leading intermediate macroeconomics textbook (Macroeconomics, Little, Brown, 1978; now in its twelfth edition), which was the first to emphasize the expectations-augmented Phillips curve as a key element of macroeconomic modeling. His institutional roles in the economics profession have included serving for three decades as the Treasurer of the Econometric Society, for nearly four decades as a member or senior advisor of the Brookings Panel on Economic Activity, and for more than fifteen years as co-chair of the International Seminar on Macroeconomics, jointly sponsored by the National Bureau of Economic Research and the European Economic Association. His nomination as a Distinguished Fellow of the American Economic Association recognizes a long career of outstanding contributions to scholarship, teaching, public service, and the economics profession.