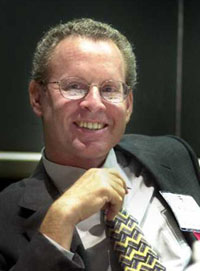 Robert J. Barro, the Paul M. Warburg Professor of Economics at Harvard University, is a leading American macroeconomist. He was one of the founders of the “New Classical” school of macroeconomic thought in the 1970s, and has contributed consistently to both methodological advances and public policy applications of the subject ever since.

Barro is best known for his contributions to the analysis of fiscal policy, showing how its macroeconomic implications can be analyzed within a neoclassical framework that fits with the approach used in the modern theory of public finance, as well as with general equilibrium theory. His paper “Are Government Bonds Net Wealth?” originated the modern literature on “Ricardian equivalence,” showing that at least under certain ideal circumstances, changes in the level of public debt have no macroeconomic consequences at all, as the wealth effects of people’s holdings of such debt are offset by the anticipated future taxes required to pay off the debt. The result, considered highly counterintuitive at the time, remains central to modern analysis, even if much is now understood about conditions under which strict debt neutrality does not obtain. Another seminal paper, “On the Determination of Public Debt,” argued for the optimality of a state-contingent path for public debt that allows for intertemporal smoothing of tax distortions, one of the most celebrated results in the normative theory of fiscal policy. Barro is also known for his empirical studies of the effects of fiscal policy, especially the effects of government purchases on aggregate economic activity, beginning with his 1981 paper, “Output Effects of Government Purchases.”

Barro has written extensively in many other areas. Among his contributions to monetary economics, his paper with David Gordon, “A Positive Theory of Monetary Policy in a Natural-Rate Model,” presented one of the most influential analyses of the inflationary bias that can result from a purely discretionary approach to the conduct of monetary policy.  That paper provided a key argument for the value of commitment to an explicit inflation target, an approach that gained popularity worldwide over the next two decades. He has also been a leader in the empirical study of the sources of long-run economic growth. More recently, his research interests include the economic consequences of religion and the role that awareness of the possibility of infrequent but catastrophic risks plays in explaining the prices of long-lived assets.

Barro’s contributions to pedagogy include authoring the first undergraduate macroeconomics textbook to present a neoclassical approach to the subject (Macroeconomics, Wiley, 1984; and many successive editions) and a widely used graduate-level text on economic growth (Economic Growth, with Xavier Sala-i-Martin, McGraw-Hill, 1995; second edition, MIT Press, 2003). He also contributes frequently to public policy debate through his writings for the Wall Street Journal, Business Week, and other popular media.