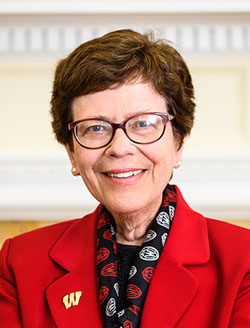 Rebecca M. Blank—currently Chancellor of the University of Wisconsin-Madison—has made important  contributions to economic scholarship,  held key positions in the executive branch of the US federal government, and served as an administrator in leading academic institutions.

Blank is a labor economist, who has conducted significant research in the study of labor supply, unemployment, the role of gender and race in labor markets, and inequality more broadly. She is particularly well known for seminal research on poverty, including many insightful analyses of public policies designed to reduce poverty or ameliorate the impact of poverty.  In particular Blank has authored several papers on the impact of U.S. welfare reform on labor supply, fertility and well-being.   She has authored or edited several noted books on inequality and poverty, including Changing Inequality (University of California Press, 2011), Finding Jobs: Work and Welfare Reform, co-edited with David Card (Russell Sage, 2000), and It Takes a Nation: A New Agenda for Fighting Poverty (Princeton University Press, 1997). The latter book was awarded the 1997 Richard A. Lester Prize for Outstanding Book in Labor Economics and Industrial Relations.   Additional work by Blank addressed the measurement of discrimination, Measuring Racial Discrimination (National Academy Press, 2004).

Blank’s contributions in the public sector are exceptional, as are her accomplishments in academic administration. She served in the Clinton Administration, as a Member of the Council of Economic Advisers, and held key positions in President Obama’s U.S. Department of Commerce—Under Secretary for Economic Affairs, Deputy Secretary of Commerce, and Acting Secretary Commerce. In addition to her role as Chancellor of the University of Wisconsin-Madison (a position has held since 2013), Blank’s academic administrative responsibilities include Co-Director of the Northwestern/University of Chicago Interdisciplinary Training Program in Poverty, Race, and Underclass Issues (1991-1996); Dean of the Gerald R. Ford School of Public Policy at the University of Michigan (1999-2007); and Co-Director of the National Poverty Center (2002-2008). She is a member of several boards, including the Board of Governors of the National Collegiate Athletic Association (NCAA).

Among Blank’s many awards are the 1993 David Kershaw Prize and the 2015 Exemplar Award, both awarded by the Association of Public Policy Analysis and Management, and the 2015 Daniel Patrick Moynihan Prize from the American Academy of Political and Social Science (AAPSS). She was named the 2010 Eleanor Roosevelt Fellow of the AAPSS, and she has been elected to other leading honorific societies, including the American Academy of Arts and Sciences, the Society of Labor Economists and the National Academies of Sciences. She holds a BS in Economics from the University of Minnesota (1976) and PhD in Economics from MIT (1983).