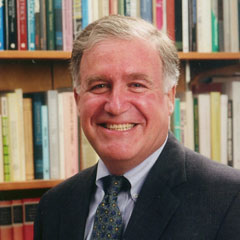 Paul Joskow has made fundamental contributions in three fields: the economics of regulation, organizational economics/applied contract theory, and energy and environmental economics. His research reflects a masterful blend of applied economic theory, detailed institutional analysis, and careful econometrics. Joskow's research has not only advanced economic knowledge, it has also contributed directly to the design of regulatory policy.

Joskow is one of the foundational scholars of modern empirical regulatory economics. His 1974 Journal of Law and Economics paper on cost-of-service regulation of utilities was important not only for upending the ongoing debate over incentives in utility regulation associated with the Averch-Johnson model of capital distortions, but also for setting a new standard for empirical analysis of economic regulation. This work demonstrated the power of grounding theoretical models in the institutions of a specific market, and combining this with careful data analysis. It highlighted the crucial role played by consumer preferences over nominal rather than real prices, an early application of “behavioral economics” that was the core of his 1972 PhD dissertation, “A Behavioral Theory of Public Utility Regulation.” Over his extensive career, Joskow has created an enormous body of highly regarded work on the regulation of electric utilities. This includes not only extensive empirical analysis of regulation, but also papers that highlight the role of economic theory for regulatory design, as illustrated in his 1986 Yale Journal on Regulation paper with Richard Schmalensee on incentive regulation for utilities, his 2000 RAND Journal paper with Jean Tirole on market power in electric utility networks, and his 2007RAND Journal paper with Tirole on the impact of regulatory wholesale market price caps on investment and reliability in restructured electricity markets. Joskow has also made significant contributions to analyzing the economic regulation of the insurance and hospital sectors, and the role of regulation and impact of deregulation and regulatory reform across the economy more generally.

Joskow is perhaps best known across the profession for his contributions to applied contract theory, which has been influential and widely cited. His 1987 American Economic Review paper “Contract Duration and Relationship Specific Investments” was a pioneering study of how contracts are crafted in the presence of large relationship-specific costs. This paper collected information on power plant contracts for coal purchases, and developed exogenous measures of relationship specificity to provide one of the earliest and most compelling empirical tests of the theory of transactional cost economics. In related work, such as his 1985 Journal of Law, Economics, and Organizations paper, Joskow examined the role of vertical integration as a strategy for avoiding contractual incompleteness in the coal market. His body of work on coal contracts is still widely referenced as a key illustration and empirical test of the principles of contract theory. His contributions to and centrality in this area were recognized in his election as President of the International Society for New Institutional Economics in 2002–2003.

Joskow is widely known within and outside the profession for his many contributions to energy and environmental economics. In the energy field, his 2003 book with Richard Schmalensee, Markets for Power, is a landmark analysis of the electric utility industry. It provides a detailed analysis of regulatory changes in the last half century, marshals a range of data sets for this investigation, and then examines the efficiency and distributional effects of a number of prospective regulatory policies. In the environmental economics field, Joskow's 2000 book with Denny Ellerman, Juan-Pablo Montero, and Schmalensee, Markets for Clean Air: The U.S. Acid Rain Program plays a similarly central role in describing the economics of what became the largest tradable-permits structure in U.S. environmental policy, a policy where he played a substantive advisory role in its design. His 1998 American Economic Review paper with Elizabeth Bailey and Richard Schmalensee documents the functioning of the acid rain permit market, and presents evidence on the cost saving and efficiency of this market. His 2008 report with Denny Ellerman on the European Union Emissions Trading System is a commanding description and assessment of the early implementation of Europe’s ambitious carbon cap and trade initiative. Joskow has not only advanced the state of economic analysis of energy markets and environmental policy, but has also served a critical role translating and disseminating that knowledge to a broader, nonacademic audience, including policymakers, regulators, and business.

Joskow is the Elizabeth and James Killian Professor Emeritus at MIT. He currently serves as the President of the Alfred P. Sloan Foundation, one of the leading foundations supporting research in science, engineering, and economics. He is the past president of the International Society for New Institutional Economics, and chairs the Board on Science, Technology, and Economic Policy at the National Academy of Sciences.