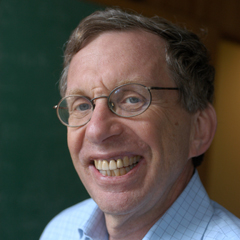 Jerry Hausman has made extensive contributions in many areas, but particularly in applied econometrics. Three classic articles by Hausman develop ideas about specification testing: “Specification Tests in Econometrics,” “Panel Data with Unobservable Individual Effects,” (with William Taylor) and “Specification Tests for the Multinomial Logit Model” (with Dan McFadden). The central insight of this work is that, under the null hypothesis of no specification, an efficient estimator (such as an ordinary least squares estimator) must be uncorrelated with another consistent estimator (such as an instrumental variables estimator). That insight was used to form specification tests comparing two estimators. When the difference between the two is large, that has provided evidence in thousands of applications where one of the two models is misspecified.

Hausman’s work on “Individual Discount Rates and the Purchase and Utilization of Energy-Using Durables” is a rare example of empirical research where the quantitative findings continue to be influential more than thirty years after publication. That work explored the trade-off between capital costs for more energy efficient appliances and operating costs for the appliances, and found that individuals use a discount rate of about 20 percent in making the tradeoff decision—raising issues in understanding consumer choice that continue to be actively explored.

Hausman and his coauthors have provided solutions to numerous practical estimation problems that have proved to be enduringly useful. Those collaborations developed methods for estimating count data models to account for the effects of individuals or firms within panel data in “Econometric Models for Count Data with an Application to the Patents-R&D Relationship” (with Bronwyn Hall and Zvi Griliches), methods to correct for measurement error in “Errors in Variables in Panel Data” (with Zvi Griliches), and methods to correct for missing data in “Attrition Bias in Experimental and Panel Data: The Gary Income Maintenance Experiment” (with David Wise).

Those contributions in applied econometrics are just a few highlights of a large body of work that also solves problems in semiparametric estimation and with weak instruments. In addition, Hausman has made substantive advances in the fields of public finance, labor, industrial organization, and telecommunications. For instance, his provocative findings about the incidence of taxes on labor supply, and on savings and investment decisions spurred much new work in those areas. He has made innovative theoretical and empirical contributions on the effects of new goods on consumer welfare and cost of living indices, studying the impacts of a diverse range of goods and services, including those of mobile phones, cereals, and discount retailers.