Isabel (Belle) Sawhill is a groundbreaking member of the economics profession who has made important contributions in social policy and the wellbeing of children and families. Her scholarly work is distinguished by the fact that she has also held important policy positions, including associate director of the Office of Management and Budget, director of the National Commission for Employment Policy, senior fellow at the Urban Institute, and vice president, director, and (most recently) senior fellow of the Economic Studies program of The Brookings Institution. With this experience, her economic insights are both informed by and have had a significant impact on economic policymaking in Washington, DC over the past 40 years. 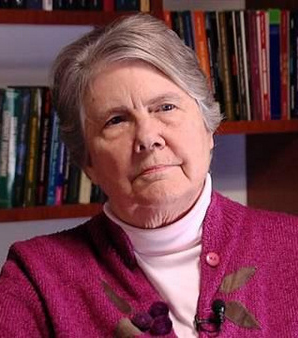 Belle has written numerous articles and books on a range of subjects, all of which use economics and econometrics to address issues of direct relevance to public policy. She has furthered our understanding of women’s role in the labor market (including discrimination against women and female poverty), welfare policy and its impact on families, education, poverty, social mobility, and inequality, and the U.S. budget.

Her most widely cited paper is “Poverty in the U.S.: Why Is It so Persistent?” which appeared in the Journal of Economic Literature in 1988. The paper is a tour de force in discussing ways to measure poverty, its time trend and composition, and exploring hypotheses for why it has been so persistent. So comprehensive and compelling, it spurred a renewed interest in this important topic and inspired a generation of young economists. Belle has led the economics and policy field in other ways. An early piece (1973) in the Journal of Human Resources, “The Economics of Discrimination against Women: Some New Findings,” revealed that women’s advancement over their lifecycle was low for all women, even those never married and presumably without children, despite having job tenure equal to men. She raised the possibility of statistical discrimination and low work expectations that other researchers went on to explore more fully for decades.

The topic of single parenthood has been at the center of Sawhill’s policy interests for a long time. To her, and many others, single parenthood is the core issue of poverty and intergenerational immobility in America. In addition, the topic concerns women’s special economic disadvantages. More recently Sawhill has completed a book on unmarried parenthood in which she examines the impact of single parenthood on the wellbeing of children. She argues that outcomes are worst when individuals simply “drift” into parenthood without making a conscious decision. As is typical of Belle, her case is based on compelling empirical evidence and her policy recommendations rest on insights from behavioral economics. Belle’s views on the subject have changed with the times and her recent volume and editorials have argued compellingly for the subsidization or insurance coverage of LARCs (long-acting reversible contraceptives) to change the default from having to do something difficult to not having to do something at all.

Isabel Sawhill is currently a Senior Fellow at The Brookings Institution where she had been Vice President and Director of Economic Studies. Her election as Distinguished Fellow of the American Economic Association recognizes her important contributions to the economics of social policy and the family.