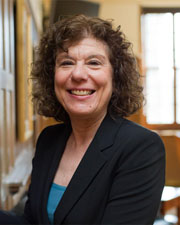 Francine Blau is a labor economist who has made seminal contributions to the study of labor market inequality. Her research on the sources of gender wage gaps in the labor market has transformed the field, and much of what is known today is due to her high quality, innovative, and timely work in the area. She has made notable contributions to other areas of labor economics as well, including studies of other types of wage inequality, immigration, and international labor market comparisons.

When Francine Blau’s first paper, “’Women’s Place’ in the Labor Market,” was published in 1972, the female labor force participation rate was 44 percent and the ratio of female-to-male earning hovered around 60 percent. In her paper, she highlighted the importance of occupational segregation as a source of gender wage gaps; that is, women were paid lower wages in part because they tended to be segregated into low-paying occupations. This discovery, along with her pioneering use of microeconomic data to investigate multiple sources of gender wage gaps, changed the way the profession approached the issue and set the stage for subsequent inquiries. Francine Blau’s subsequent work with co-authors, such as Marianne Ferber and Lawrence Kahn, has built on her initial insights and extended them in ways that contribute to the understanding of the trends in female labor force participation rates and gender wage gaps. Her highly-cited book The Economics of Women, Men, and Work, recently published with Anne Winkler in its 8th edition, is the standard textbook on gender issues in the labor market. And, just as her early work would have predicted, a significant decline in occupational segregation by gender has been an important source of the decline in the gender wage gap. As Blau and Kahn document in their 2017 Journal of Economic Literature article, the ratio of female-to-male weekly wages has risen from 60 percent in the early 1970s to over 80 percent at present.

Francine Blau has published over one hundred articles, chapters, and proceedings and she has written or edited more than ten books and monographs. In addition to the research on the importance of occupational segregation, Blau has also made important contributions to other facets of women’s labor market outcomes, such as the analysis of how differences in labor market institutions across countries can create differences in gender wage gaps, the labor market outcomes of immigrant women, and factors affecting female labor force participation. Her contributions also extend to the source of wage inequality by skill level in the U.S. relative to other countries.

Francine D. Blau is the Frances Perkins Professor of Industrial and Labor Relations and Professor of Economics at Cornell University. She is a Research Associate of the NBER (National Bureau of Economic Research), and a Research Fellow of IZA (the Institute for the Study of Labor). She earned her BS from Cornell and her Ph.D. from Harvard. She has spent much of her career at Cornell. Blau has served the AEA in many capacities, including as a past Vice President of the AEA (1993-1994) and chair of CSWEP. She was the winner of the Carolyn Shaw Bell Award in 2001.