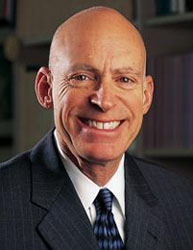 Over the course of an innovative and prolific career, Edward Lazear has focused on the analysis of why workers and employers behave as they do in the labor market.  In pioneering work on personnel economics, he showed how mandatory retirement rules might arise in competitive labor markets, as a by-product of incentive schemes involving delayed compensation (see “Why Is There Mandatory Retirement?” Journal of Political Economy, 1979).   In related work, he showed why employers sometimes use tournaments rather than piece rates to motivate workers (see “Rank-Order Tournaments as Optimum Labor Contracts,” with Sherwin Rosen, Journal of Political Economy, 1981), in situations where it is difficult to measure effort.  Professor Lazear has also published important research on topics ranging from: worker compensation and effects on productivity; governmental policies on discrimination, affirmative action, and comparable worth; educational policy; unemployment; culture, language, and diversity issues; the doctrine of employment at will; the distribution of income within the household; and pricing and marketing policies. He has over 100 published articles and eleven books.

Lazear won the IZA Prize in Labor Economics in 2004, which is given to recognize internationally recognized significant contributions to labor economics. This was primarily for his work in personnel economics.  In June 2006, Lazear was awarded the Jacob Mincer Prize given by the Society of Labor Economics for lifetime contributions to the field. Lazear served as Chairman of the President’s Council of Economic Advisers and was at the White House from 2006 to 2009. Founding Editor of the Journal of Labor Economics, Lazear is a Fellow of the American Academy of Arts and Sciences and of the Econometric Society, and a Research Associate of the National Bureau of Economic Research. He is the former President of the Society of Labor Economists.