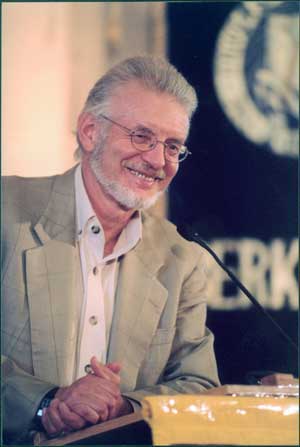 Daniel McFadden is an American economist and co-laureate (with James Heckman) for his development of the microeconomic analysis of individual or household behaviour known as ‘discrete choice’, such as understanding how people choose where to work, where to live, or when to marry. McFadden himself seems to have made good choices – he married photographer Beverlee Tito Simboli in 1962 (they have three children and a few grandchildren), works at the University of California (Berkeley) and has a small farm/vineyard in the Napa Valley with some livestock, olives, figs and grapes.

He was born in 1937 in Raleigh, North Carolina, and was a good student, augmenting his school studies with correspondence courses in algebra and geometry, but was suspended from high school in 1953 for protesting, ironically, against a policy of student suspensions. After working on an uncle’s dairy farm in Minnesota, at age 16 McFadden entered the University of Minnesota where he gained a BSc in physics with honors. He also designed and built an X-ray telescope, and an early transistor computer. Helping in psychological tests attracted McFadden to the study of human behaviour, so he studied a combination of psychology, sociology, economics, anthropology, political science, mathematics, and statistics to gain his PhD in economics in 1962.

After a year at the University of Pittsburgh as a Mellon post-doctoral fellow, he joined the faculty at Berkeley and focused his research in areas including choice behavior. In 1964, McFadden worked out an econometric model linked to the theory of choice behavior. Through the analysis of discrete choice (the choices made among a set number of alternatives), McFadden’s work helped predict usage rates for public transport systems, and his statistical methods were applied to studies of labor-force participation, health care, housing and the environment. He also worked at the University of Chicago in 1966–67 (where he met and befriended James Heckman), Yale in 1976–77, and CalTech in 1990.

In 1977, he took the James Killian Chair in Economics at MIT where, in 1986, he became the director of MIT’s Statistics Research Center, but in 1991 returned to Berkeley to establish the Econometrics Laboratory, devoted to improving statistical computation for economics applications. He is still there, as the E. Morris Cox Professor of Economics. In recent years, his research has concentrated on the deviations from the economic theory of choice. He has been working on the economic status of the elderly, relating to housing, financial planning, and the delivery and cost of health services. McFadden was given the John Bates Clark Medal by the American Economics Association in 1975 and was elected to the National Academy of Sciences in 1981.

This text was taken from the book:
"NOBELS. Nobel Laureates photographed by Peter Badge"
(WILEY-VCH, 2008).