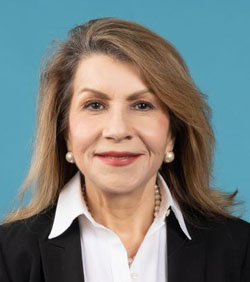 Carmen Reinhart is currently the Senior Vice President and Chief Economist of the World Bank Group. She is on public service leave from Harvard’s Kennedy School of Government, where she is the Minos A. Zombanakis Professor of the International Financial System. Her previous positions include roles as a senior fellow at the Peterson Institute for International Economics, Professor of Economics and Director of the Center for International Economics at the University of Maryland, and stints as a policy advisor at the International Monetary Fund. She received her Ph.D. in 1988 from Columbia, where her adviser was Robert Mundell. She has received numerous awards and honors, including the King Juan Carlos Prize in Economics, the Kiel Institute’s Bernhard Harms Prize, and the National Association of Business Economists’ Adam Smith Award. She was cited as one of the world’s most influential scientific minds by Thompson Reuters in 2014, as a “Top 100 Global Thinker” by Foreign Policy magazine in 2010 and 2011, and as a Bloomberg Markets “Most Influential 50 in Finance” in 2011.  Besides her time at the IMF, her professional service includes membership in many advisory boards and other associations, in many cases related to problems of international finance and development.

Reinhart’s work is broad, and includes contributions related to financial instability and its consequences in both emerging and advanced economies; the management and risks of international capital flows (including “sudden stops”); the effects of high levels of government debt or debt default, particularly on financial stability; exchange-rate systems and management; commodity prices; financial repression; and financial contagion.

Some of Reinhart’s most influential work, much of it with Graciela Kaminsky, studied the phenomenon of “twin crises” (banking and currency crises). Considering the experiences of many countries, Reinhart and Kaminsky found close links between the two types of crises. Both types of crises typically follow a slowing of the economy. Banking crises (which themselves often follow financial liberalizations) tend to precede currency crises as hot money flows out of the country. Currency crises in turn can make banking crises worse, for example by inducing official interest-rate increases to defend the currency, or by the failure of banks to hedge their foreign-currency exposures. In related work, Reinhart applied these ideas to specific crises, including the Asian and Latin American crises of the 1990s. This line of research exemplifies Reinhart’s research style, which includes use of data from many countries and episodes, attention to the interaction of macroeconomic and financial factors, detailed institutional knowledge, and a global perspective.

Reinhart’s contributions to the empirics of exchange-rate regimes include a well-known 2002 article with Guillermo Calvo on the “fear of floating.” Conventional wisdom held that emerging-market economies should tend to “corner solutions” in their exchange-rate regimes, i.e., either a hard peg or a free float. The article showed that, in reality, EMEs that claim to allow their exchange rates to float mostly do not, presumably out of concerns for macroeconomic and financial stability.

With her frequent coauthor Kenneth Rogoff, in 2009 Reinhart published a timely and highly-acclaimed book, This Time is Different: Eight Centuries of Financial Folly. The book is a comprehensive empirical study of financial crises, using data series from sixty-six countries beginning as much as 800 years ago. Reinhart and Rogoff looked at a variety of financial calamities, including currency crises, banking crises, hyperinflation, government debt defaults, and their interactions. They link financial crises to macroeconomic conditions, including a country’s economic and financial development, growth rates, outstanding debt, and other factors.  In this and other work they documented the important fact that, historically, recessions following large financial crises tend to be longer and deeper than other downturns, a prediction that was borne out by the slow global recovery from the Great Recession. The book was the winner of the Gold Medal Arthur Ross Book Award, presented by the Council on Foreign Relations, and of many other awards and recognitions. Her other work bearing on the global crisis included work with Rogoff on the effects of public debt on financial stability and an early (2000) piece (with Morris Goldstein and Kaminsky) on early warning indicators of financial instability in emerging-market economies.

In all, Reinhart’s work has shown how to use the experience of many countries and time periods to gather lessons about the causes and prevention of financial crises, topics of evident importance. She is a prolific writer whose work has proved both illuminating and often prescient.