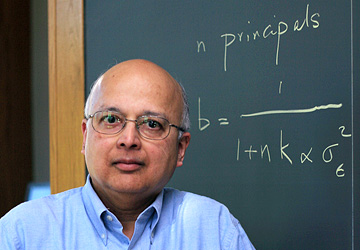 His research interests have included microeconomic theory, game theory, international trade, industrial organization, growth and development theories, public economics, political economy, and the new institutional economics. His book publications include Theory of International Trade (with Victor Norman), The Art of Strategy (with Barry Nalebuff), Investment Under Uncertainty (with Robert Pindyck), Games of Strategy (with Susan Skeath), Lawlessness and Economics: Alternative Modes of Governance, and The Making of Economic Policy: A Transaction Cost Politics Perspective. He has also published numerous articles in professional journals and collective volumes. He was President of the Econometric Society in 2001, and of the American Economic Association in 2008. He was elected to the American Academy of Arts and Sciences in 1992, the National Academy of Sciences in 2005, and the American Philosophical Society in 2010, and was elected a Corresponding Fellow of the British Academy in 2006.

Dixit was born in Bombay (now Mumbai) in 1944, and is a naturalized U.S. citizen. He was educated at St. Xavier’s College (Bombay), Corpus Christi College (Cambridge) and the Massachusetts Institute of Technology. He was an assistant professor at the University of California, Berkeley, a fellow of Balliol College, Oxford, and professor at the University of Warwick, before joining Princeton in 1981. He has held visiting professorships at MIT, and visiting scholar positions at the International Monetary Fund, the London School of Economics, the Institute for International Economic Studies (Stockholm), and the Russell Sage Foundation.