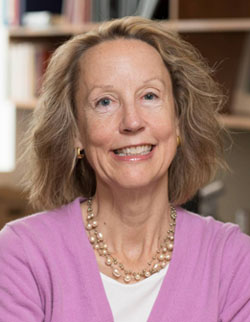 Anne Catherine Case is the Alexander Stewart 1886 Professor of Economics and Public Affairs at Princeton University. Trained as a labor economist, Case has made seminal contributions in the fields of health, development, and labor economics, with scholarship that has garnered wide recognition across sciences and social sciences alike and sparked public conversation around the negative impacts of rising socio-economic inequality in the U.S.

Although several of Case’s early contributions were in the fields of political economy and public finance, her work has continuously sought to understand the social origins of economic inequality.  For instance, one early paper with Kristin Butcher – “The Effect of Sibling Sex Composition on Women's Education and Earnings” (Quarterly Journal of Economics) – documented the role of sibling sex composition on adult female labor market outcomes, providing novel evidence on social barriers to female advancement in the workforce.  Over time her focus turned to understanding the links between economic status and health status in childhood. Over the past two decades, Case has written extensively on health over the life course among vulnerable populations, uncovering numerous aspects of the origins of the socioeconomic gradient in health in developed and developing countries.

One seminal paper coauthored with Christina Paxson, “Economic Status and Health in Childhood: The Origins of the Gradient” (American Economic Review), shows that the correlation between socioeconomic status and health that is so strong in adulthood actually appears very early on in the life course, and grows steadily throughout childhood. The paper provides novel evidence that parents’ income has a strong causal effect on health status of children, which contributes to the intergenerational transmission of poverty. In recognition of this work, in 2003 Case was awarded the Kenneth J. Arrow Prize in Health Economics from the International Health Economics Association. A follow-up paper from 2007 – Stature and Status: Height, Ability, and Labor Market Outcomes (Journal of Political Economy) – demonstrates that the well-known association between adult height and earnings reflects a positive association between height and cognitive ability, likely reflective of health inputs in early childhood that ultimately produce long-run differences in earnings ability.

More recently, Case has produced groundbreaking research with Angus Deaton documenting dramatic reversals in mortality trends among the poor in the U.S.  The pair sought to understand why life expectancy suddenly began to fall in the U.S. 2015-2017 while it continued to rise in other parts of the developed world.  These papers led to the discovery that working-age white men and women without college degrees were dying of suicide, drug overdoses, and alcohol-related liver disease at unprecedented rates — what Case termed “deaths of despair”. In 2017, Case was awarded the Cozzarelli Prize from the Proceedings of the National Academy of Sciences for this research on midlife morbidity and mortality, which has sparked a national conversation around socioeconomic inequality and health.