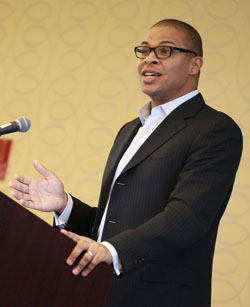 Roland Fryer is an influential applied microeconomist whose work spans labor economics, the economics of education, and social problems and social interactions.  His innovative and creative research contributions have deepened our understanding of the sources, magnitude, and persistence of US racial inequality.  He has made substantial progress in evaluating the policies that work and do not work to improve the educational outcomes and economic opportunities of children from disadvantaged backgrounds.  His theoretical and empirical work on the “acting white” hypothesis of peer effects provides new insights into the difficulties of increasing the educational investments of minorities and the socially excluded.  Fryer is the leading economist working on the economics of race and education, and he has produced the most important work in recent years on combating the racial divide, one of America’s most profound and long-lasting social problems.

He has mastered tools from many disciplines to tackle difficult research topics.  Fryer has developed and implemented compelling randomized field experiments in large US urban school districts to evaluate education interventions.  He founded EdLabs (the Education Innovation Laboratory at Harvard University) in 2008 to facilitate such efforts and continues as its director.  He has incorporated insights from psychology to formulate a new model of discrimination based on categorization, and he has used detailed historical archival research to understand the origins and spread of the Ku Klux Klan.

Roland Fryer in a series of highly-influential studies has examined the age profile and sources of the US racial achievement gap as measured by standardized test scores for children from 8 months to seventeen years old.  Fryer (with Steven Levitt) has shown the black-white test score gap is quite small in the first year of life, but black children fall behind quickly thereafter (“Testing for Racial Differences in Mental Ability among Young Children,” American Economic Review 2013). The racial test score gap is largely explained by racial differences in socioeconomic status at the start of schooling (“Understanding the Black-White Test Gap in the First Two Years of School,” Review of Economics and Statistics 2004), but observable family background and school variables cannot explain most of the growth of the racial test score gap after kindergarten.  Fryer’s comprehensive chapter in the Handbook of Labor Economics (2011, “Racial Inequality in the 21st Century: The Declining Significance of Discrimination”) documents that racial differences in social and economic outcomes today are greatly reduced when one accounts for educational achievement gaps.  He concludes that understanding the obstacles facing minority children in K12 schools is essential to addressing racial inequality.  Fryer has taken up this challenge to study the efficacy of education policies to improve the academic achievement and economic outcomes of low-income and minority children.

Roland Fryer’s initial effort at designing and evaluating school-based policies focused on short-term financial incentives for students to improve measured achievement (“Financial Incentives and Student Achievement: Evidence from Randomized Trials,” Quarterly Journal of Economics 2011).  Fryer implemented and analyzed randomized field experiments in over 200 urban schools across three cities where treated students were paid for working hard (reading books in Dallas), doing well on interim standardized assessments (New York City), and earning high grades in class (Chicago).  Although students appeared to be aware of the financial incentives and self-reported to be motivated by then, the findings for all three cities were of zero mean impact of short-term financial incentives on student achievement.  Many low-income students lacked the knowledge of how to improve their performance and did not have the necessary complementary inputs (from parents, teachers, and peers) to respond to the incentives.

In “Teacher Incentives and Student Achievement:  Evidence from New York City” (Journal of Labor Economics 2013), Fryer looks at financial incentives for teachers through randomized control trials (RCTs) in New York City  (NYC) middle schools and high schools.  Fryer finds no systematic effect of traditional teacher incentives on student outcomes. The ineffectiveness of standard U.S. teacher incentive programs motivated work by Fryer (with Steven Levitt, John List, and Sally Sadoff) to try new approaches in a recent working paper.  Fryer implemented a randomized trial in 9 Illinois schools in which teachers were selected for a pay-for-performance program but where the timing and framing of the award differed randomly across teachers. He found that a “Loss” treatment—where teachers are given the bonus initially and lose all or part of it if their students do not meet performance targets—substantially and significantly raised student math performance. A traditional “Gain” treatment had no detectable impact.  The findings suggest that the structure and framing of teacher incentives are central to their success.

The Harlem Children’s Zone (HCZ), a 97-block area in Harlem that combines charter schools with neighborhood services, has provided Fryer with a testing ground for school-based vs. neighborhood-based interventions.  Fryer and Will Dobbie have exploited the lottery used for admission to the Promise Academy (a charter school that is part of the HCZ) to examine the impacts of the charter school on student outcomes.  They find short-run improvements in math test scores that are large enough to close the racial achievement gap (“Are High-Quality Schools Enough to Increase Achievement among the Poor? Evidence from the Harlem Children’s Zone,” American Economic Journal: Applied Economics 2011). A follow-up study (“The Medium-Term Impacts of High-Achieving Charter Schools,” Journal of Political Economy forthcoming) finds similar substantial positive impacts on medium-term outcomes including college enrollment, high school graduation, and reductions in risky behavior.  Fryer and Dobbie find similar positive impacts of attending the Promise Academy for residents and non-residents of the HCZ indicating high-quality schools alone even without the other HCZ community resources can be effective.

In “Getting Beneath the Veil of Effective Schools: Evidence from New York City” (American Economic Journal: Applied Economics 2013), Fryer and Dobbie collect data on the inner-workings of 39 NYC charter schools from interviews and surveys of principals, teachers, and students, along with administrative data.  They correlate the school policies and characteristics with estimates of school effectiveness in raising student achievement from lottery-based and quasi-experimental matching estimates. They find that a bundle of five school policies suggested by their in-depth qualitative research—frequent teacher feedback, the use of data to guide instruction, high-dosage tutoring, increased instructional time, and high expectations—are strongly positively correlated with improvements in student achievement.

Roland Fryer has developed new conceptual frameworks and empirical evidence to better understand the role of “cultural capital” in the creation and persistence of racial and ethnic group differences in educational investments and other social outcomes and behaviors.  His early work (“A Model of Social Interactions and Endogenous Poverty Traps,” Rationality and Society 2007) developed an equilibrium model of cultural capital (group-specific investments valuable for future social interactions with a peer or social group) and showed how a trade-off can arise between the accumulation of formal education and such cultural capital.  Fryer extended this framework (with David Austin-Smith, “An Economic Analysis of ‘Acting White’,” Quarterly Journal of Economics 2005) into an elegant model of peer effects and educational investments in which “acting white” (rejecting those who try too hard in school or accumulate too much education) can arise from a two-audience signaling quandary: signals that lead employers to offer high wages can induce peer group rejection.   The paper represents a transparent but rigorous model of educational under-investment as a signal to peers.

In “An Empirical Analysis of Acting White” (Journal of Public Economics 2010), Fryer uses data on friendship networks for high school students and uncovers noticeable racial differences in the relationship of student popularity and grades.  The findings are consistent with Fryer’s two audience signaling model of acting white with a less positive impact of grades on popularity for blacks in schools with more inter-racial contact.  The work adopts measures of the popularity and racial isolation (segregation) of one’s friends based on Fryer’s rigorous and novel work on the measurement of segregation with Frederico Echenique (“A Measure of Segregation based on Social Interactions,” Quarterly Journal of Economics 2007).  Fryer has empirically studied the role of racial identity and cultural capital for other social behaviors. Of particular note is his work with Steven Levitt (“The Causes and Consequences of Distinctively Black Names,” Quarterly Journal of Economics 2004) examining changes in patterns of first names of Black and White children since the 1960s.

Roland Fryer is also a leading scholar of the economics of discrimination, affirmative action, and anti-discrimination policy.  His work (with Matthew Jackson) explores the psychological foundations for racial discrimination in a model of categorization (“A Categorical Model of Cognition and Biased Decision-Making,” The B.E. Journal of Theoretical Economics 2008).  Fryer and Jackson show that specific biases emerge from optimal categorization with a fixed number of categories. Types of experiences and objects that are less frequent in the population tend to be more coarsely categorized potentially leading to discrimination against minority groups that looks like statistical discrimination (treating all members of a minority group as part of one category and not making finer distinctions).

Fryer has done important work with Glenn Loury analyzing the economics and consequences of affirmative action (“Affirmative Action and its Mythology,” Journal of Economic Perspectives 2005; “Valuing Diversity,” Journal of Political Economy 2013).  Fryer and Loury provide a rigorous analysis in the tradition of optimal tax theory and provide close attention to the visibility (sighted vs. unsighted) and the timing (ex ante development assistance or ex post placement advantages) dimensions of affirmative action policies.  They also have shown empirically the potential inefficiencies of “color-blind” (unsighted) affirmative action for increasing racial diversity in university admissions (“An Economic Analysis of Color-Blind Affirmative Action,” Journal of Law, Economics, and Organizations 2008 along with Tolga Yuret).

Fryer has been a leader in research on other key aspects of the racial divide including the measurement of segregation, the adverse impact of the crack cocaine epidemic of the late 1980s and early 1990s on inner-city communities, long-run trends and the determinants of rate of inter-racial marriage, the changing role of Historically Black Colleges and Universities (HBCUs) in the higher education of US Blacks, and the economics and politics of the Ku Klux Klan in the early 20th century.  For example, Fryer (along with Steven Levitt, Lisa Kahn, and Jorg Spenkuch in the Review of Economics and Statistics 2012) has empirically examined “The Plight of Mixed Race Kids” documenting that mixed-race children have economic outcomes between blacks and whites, but that mixed-race kids have higher levels of risky behaviors as adolescents.  A Roy model of peer interactions can help explain this pattern with mixed-race kids having less of a predetermined peer group choosing riskier behaviors to gain acceptance.

Roland Fryer has emerged as a leading scholar of the US racial divide and as a major figure in the evaluation of education policies to narrow the racial achievement gap.  He has been bold and fearless in his willingness to use rigorous economic theory, collect new data, and to develop and implement appropriate empirical strategies (including large-scale randomized field experiments) to assess any serious hypothesis that may shed light on racial inequality and may provide policy tools to improve the long-run outcomes of disadvantaged children.  Fryer’s work is marked by a creative and entrepreneurial edge.  His work on testing educational reform policies has led to better models of the education production function and to promising policies for improving schools for disadvantaged US students.  Fryer’s research illuminates the role of peer effects, social identity, and economic incentives in the educational and economic outcomes of minority groups in the United States and around the world.