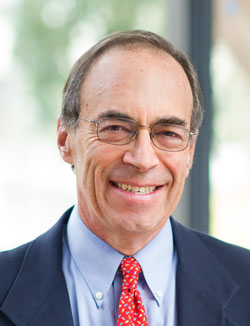 Alan Auerbach is the Robert D. Burch Professor of Economics and Law at the University of California, Berkeley and the director of the Burch Center for Tax Policy and Public Finance. He is a fellow of the Econometric Society and the American Academy of Arts and Sciences, a former member of the executive committee and subsequently vice president of the American Economic Association, and a member of the National Academy of Social Insurance. He is currently the President of the Western Economic Association International and was formerly the President of the National Tax Association. He has been the editor of the American Economic Journal: Economic Policy and the Journal of Economic Perspectives, and serves, or has served, on the editorial boards of many other economics and tax journals.

Alan is a prolific scholar who altered our understanding of tax and fiscal policy. He and Larry Kotlikoff pioneered new methods for analyzing the impact of fiscal policies across generations, now widely known as generational accounting. They also developed methods to measure the long-run “fiscal gap” between tax revenues and expenditures in the federal budget. This measure is now widely used by both researchers and practitioners.

Alan Auerbach is responsible for some of the most important advances in tax economics of the last one-third of a century.  He played a fundamental role in advancing both theoretical and empirical analysis of capital income taxation and corporate tax policy. More recently, as nations have debated how to tax global companies he has analyzed the trade-offs among different approaches and studied how destination-based cash flow tax would impact distribution and behavior. Other work explored how taxes on dividends affect share prices but not corporate investment, pioneering a "new view" of the corporate tax. He has also shaped our understanding of the extent and impact of corporate tax asymmetries. Alan has also written on federal budget rules, automatic stabilizers, dynamic scoring, budget windows, and revenue forecasting.

Alan has also been deeply involved in tax and fiscal policy. His research with coauthors to create a computable general equilibrium model for analyzing various tax policy regimes has enabled a rigorous analysis of the potential consequences of tax policy being considered by policy makers. His expertise has made him a frequent participant in tax policy debates on issues ranging from fundamental tax reform, to Social Security financing and reform, the efficacy of tax cuts as short-term fiscal stimulus, and changing the taxation of household capital income. He has built bridges between public finance economists, the legal profession, and tax policy practitioners in Washington. He has frequently testified before Congress, and has served on advisory panels and participated in high-level policy meetings that focus on important issues in tax policy. While Deputy Chief of Staff of the Joint Committee on Taxation he directed important and influential studies of the distributional analysis of tax reform and the international competitiveness of the U.S. tax system. He is a relied upon consultant to government agencies and institutions in the U.S. and abroad.

Alan has published more than 200 journal articles and book chapters, written four books, and edited or co-edited 14 books. He continues to be a highly productive scholar, having written half a dozen papers in the past year. As an adviser and mentor he has helped shape and develop the scholarship of generations of students and so further magnified his already substantial influence in the economic profession.