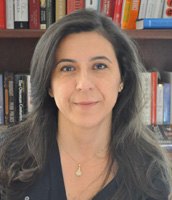 Şebnem Kalemli-Özcan is Neil Moskowitz Endowed Professor of Economics at University of Maryland, College Park. She is a Research Associate at the National Bureau of Economic Research (NBER) and a Research Fellow at the Center for Economic Policy Research (CEPR).

She was the Duisenberg Fellow at the European Central Bank in 2008 and held a position as Lead Economist/Adviser for the Middle East and North Africa Region at the World Bank during 2010-2011. She has held positions as a Visiting Professor at Bilkent University, Koc University and at Harvard University. She is the Houblon-Norman Fellow of Bank of England and CFR International Affairs Fellow in International Economics based at the Federal Reserve Board and International Monetary Fund for 2017-2018. Currently, she serves at the editorial board of American Economic Review, Journal of European Economic Association and Journal of International Economics.

She is the first Turkish social scientist who has received the Marie Curie IRG prize in 2008 for her research on European financial integration. Her current research focuses on the links between capital flows and macroeconomic fluctuations and growth. She works with big data from firms and banks worldwide to identify the linkages between financial and real sectors both in advanced countries and in emerging markets.